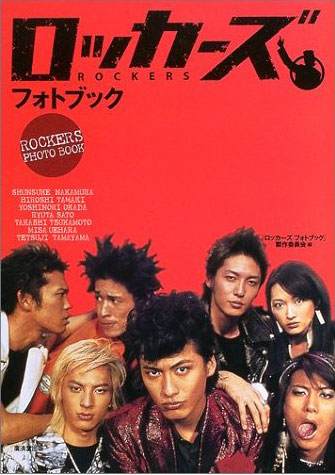 Guitarist Ko-chan (Tsukamoto, representing bleached-haired Rockers stringman Hitomi Tsurukawa) is a mess of sexual repression after a childhood at the mercy of two elder sisters eager to use him as a guinea pig for their make-up skills. Bassist Gaku-chan (Ryuta Sato, representing original four-stringer Jinkichi Anai) keeps a bucket in the wings for whenever his nerves get the better of him, and drummer Momo-chan (Okada in the role of Yoichi Funakoshi, and note all the cute and decidedly un-rock-like nicknames) is doomed to forever carrying the botched childhood attempts at self-tattooing.

It's not until this foursome is forced to look for an additional guitar player after Jin's dad burns his Stratocaster (followed by a vision of Jimi Hendrix at Monterey), that attitude and musical ability enter into the equation. Leather-clad, shade-wearing Tani (Tamaki), inseparable from his black Les Paul, is introduced as the king of R'n'R cool and Jinnai keeps him firmly seated on his throne throughout the film, retroactively proclaiming the guitarist, rather than himself, as the band's true hero (not coincidentally, he is the only band member referred to by his real name). -- Midnight Eye