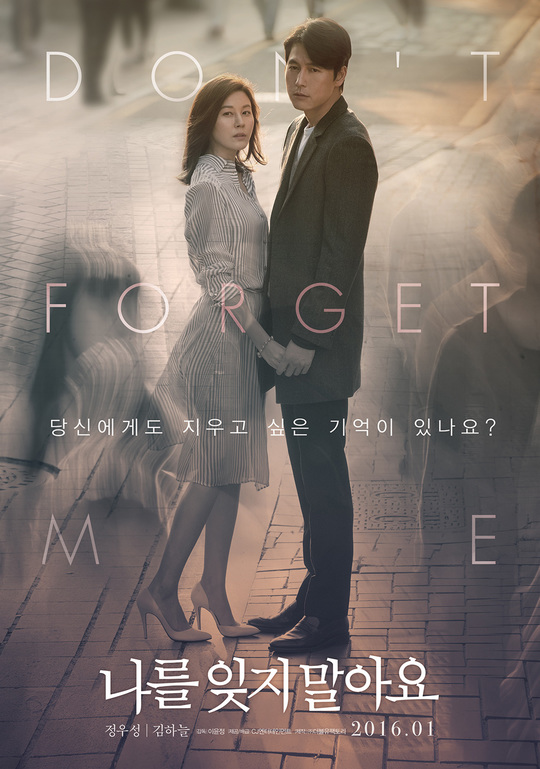 Seok-Won (Jung Woo-Sung) lost 10 years of his memory after a car accident. He now has trouble identifying his family, friends or even himself. For some reason, he is afraid to know about his past. An afternoon visit to the hospital, leads him to sit directly in front of a woman in tears. The woman is Jin-Young (Kim Ha-Neul). Eventually, Seok-Won falls in love with Jin-Young. As the couple prepare for their future, Seok-Won's past slowly begins to emerge.

Jinjoo Jan 20 2020 11:58 pm I just finished watching this and woah it was a very good movie! Both Kim ha neul and Jung woo song were superb in their acting, their chemistry was good & i hope they make a drama together or a movie again! the story, production of JWS, direction are outstanding! I highly recommend this movie! I didn't realize Jung woo song is also a producer, this actor never ceased to amaze me! it's a very touching movie! their love story was interesting & poignant!

JJ Feb 08 2017 2:17 am Just finished watching this movie. Great cast. Great acting. It reminds me of The Notebook/The Vow. These kind of movies always leaves me a bit broken.

Lizzy Dec 28 2016 12:23 pm Not usually a watcher of romance, but I HAVE to see this. Just bought this today on DVD and can't wait to watch. Looks promising, heartbreaking and powerful.

Lad Dec 03 2016 11:50 am Anyone know what the ending song in this movie? Searching everywhere still got nothing

rwn Nov 24 2016 12:37 pm Kim Jin young character is prove of true love does exist. Applause to the cast n production n the director. Emotion all overflow..storyline n script are awesome..happy n proud to watch these pair together and beautiful story

Deborah Nov 24 2016 10:55 am Loved this movie! The two leads are fantastic actors, two of my favourite and are very good together in this movie! Jung woo Sung is so extremely versatile and pretty darn hunky as well! Kim ha neul is brilliantly understated in beauty and her acting! Can't say enough good things!

grace Sep 18 2016 12:43 am I have to take my word back about saying this movie is kinda remind me to The Vow. it's more tragic, sweet, and lovely at the same time..... Idk what I have to say. the love from her is sooooooooooooooooo GREAT.... idk If I have to say the ending is happy ending or sad ending...it's up to you guys!! watch it! :D. but, you will love this movie. actually its also because Kim Ha Neul and Jung Woo Sung play together...they are GREAT pairing and NEVER LOOK OLD!!! OMGGGGGGGGG

Dee May 11 2016 8:47 am dear drama God thank you so so much u already paired Jung Woo Sung and Kim Ha Neul..for i've been their huuuuge fan of these two beautiful people! Now my last wish in KMovieland is to witness him with KIM HYE SOO doing project together!!!! please please please...(whether it is a la Mr&Mrs Smith or even Goodbye Girl is totally alriiiiite and much appreciated!) haha.. oh gooooosh..i'll be the happiest girl if this really happens T_T...

Yes, I have watched that movie (title: A Moment to Remember with Son Ye-Jin). It was also a great love story.

Jung Woo-Sung is really such a handsome debonair talented actor. I have watched almost all his movies and dramas.

I super highly recommend this movie Remember You to all wives and women, moral of this movie = unconditional love and forgiveness.

This is really one such powerful love story.

CONGRATULATIONS to the entire production, staff, crew and cast!