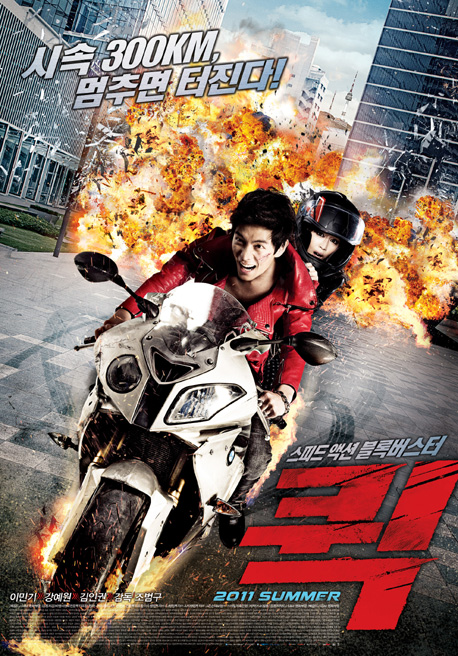 Ki-Soo (Lee Min-Ki), Myung-Sik (Kim In-Kwon) and Ah-Rom (Gang Ye-Won) were members of the same notorious motorcycle gang. They enjoyed their days roaming the streets recklessly on their motorcycles.

Now, Ki-Soo works as a motorcycle delivery man, Myung-Sik is a motorcycle cop and Ah-Rom is a member of pop idol group. One day, Ki-Soo has Ah-Rom riding on the back of his motorcycle as he makes a delivery. To his surprise the delivered package explodes as he leaves the building. Ki-Soo's cellphone rings and he hears a voice telling him that their is another bomb planted in his helmet which Ah-Rom is wearing. Ki-Soo is ordered to take another delivery. If the delivery is late or he attempts to run away the helmet will explode ... 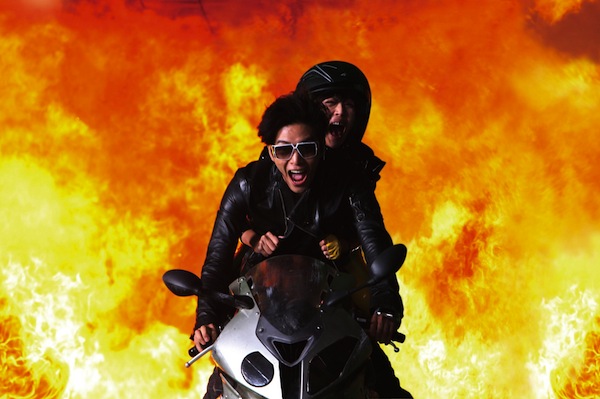 Monette Sep 24 2022 2:29 am While watching this movie i cannot help but got to amazed with all what they have to destroy just to make this beautiful. I can't imagine if this was made this year... It is so unbelievable! It was super duper well and hard made.

My respect to all the cast and crews and specially to the double and stunt mans who gave all their professionalism.

At the end you will see how hard it was made. Kudos! I hope many will watch and appreciate it. Saranghae Lee Min ki Oppa!

Nice that it has a little romance in it. It taught me that love is not spoken. It is done ♥ I like the twist part at the ending, it makes sure that Han Gi Su is really into Chun Sim XD And all the chaos happened among cars, trucks, or even dumb riots between characters' dialogs make this movie a really entertaining one. You'll never want to be off the seat :))

The acting was so natural and not too much. I enjoyed every second of it :D Lee Min Ki and Kang Ye Won is definitely a hot pairing! in this movie or even in HAEUNDAE (y) KiWon couple <

Meagan Mar 12 2013 8:27 pm I agree that the characters were sometimes too silly but overall it was fun to watch. I watched it because it reminded me of the American film "Premium Rush". Overall the movie was enjoyable so if you are looking for a good korean movie this is a good pick.

Thumbs up!!! Dec 11 2012 10:42 pm It was a nice movie. Left me with a smile. I agree with the comments that most of the characters acted dumb and some scenes are just surreal at best. But if you don't want to watch a movie which is just a slice of life, everything is like in realty, go for this one. Even though they act dumb (p.s. their acting is good, just normal people don't react or do like them) or the scenes are impossible, they fit together very nicely, they don't bother you. I enjoyed watching it and I definitely recommend it. Thumbs up!!!

kevin Oct 23 2012 8:13 pm Really good movie , but i want get a information that which song sung in the stage program in this movie ?

Jen Sep 03 2011 10:05 am This is a movie for those who have the ability to throw out all notion of logic while watching a movie. Implausible from the start, the movie gets worse with each slow minute. Predictable, unsophisticated, and repetitive, the movie does bring about some cheap laughs, but would only be recommended if your alternate movie option is Twilight. I also thought it was weird that the ending credits showed the behind the scenes clips of the stunts and stuntmen getting injured. They're neither appropriate nor needed; why introduce the notion of reality now?

kawai Aug 25 2011 10:28 pm Just came back from the theatres. Ok, THE FIRST HALF IS GOOD. THE SECOND HALF went on such a tangent, and was wayyyyy tooooo dragged out... So my advice is to watch the first half, and leave after they talk about clams.

the premise has a fun twist to the hostage 'speed' situation. Unfortunately, there are alot of holes and digression, and alot of things really didn't make a whole lot of sense.. Also, that characters 1/2 way get so annoying that I wanted them to just die....YOU HAVE TO BE PRETTY DUMB to do the things they did.. or didn't do... also, this movie has sooo many cliches, I was just smacking my head.

Other than that, the first half is just great!