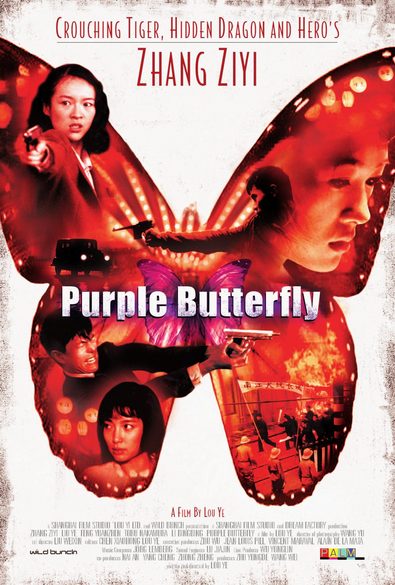 "Purple Butterfly" takes place in Manchuria in 1928 and Shanghai in 1931 and 1937. The focus is on the conflict between China and Japan. In 1928, Itami Hidehiko (Toru Nakamura), whose father played a role in developing the Manchurian railroad system, is in love with fellow university student Cynthia (Zhang Ziyi), but he returns to Tokyo and then comes back to Shanghai in 1937 as an undercover deputy to the Japanese secret service official in charge of the city. Also during 1928, Cynthia's brother is killed by Japanese in reaction to his opposition to their presence in Manchuria. Later, Cynthia moves to Shanghai. In 1931, Japanese troops achieve a military victory over China in Manchuria, which is renamed Manchukuo, and also set up an occupation of Shanghai. Cynthia then joins the Shanghai underground resistance, known as the Purple Butterfly, headed by Xie Ming (Yuanzheng Feng), who gives Cynthia a new identity as Ding Hui, assigned to work in a hospital; the two evidently cement their friendship with sex, but politics takes priority. Also in 1931, Szeto (Ye Liu) is having a love affair with telephone operator Yiling Tang (Bingbing Li). In 1937, by the time Itami returns, Japan is poised to attack China itself, and Itami proposes to take Cynthia as his bride back to Tokyo. However, one day in 1937 Szeto, mistaken for a resistance agent, watches as his girlfriend dies in the crossfire of a gun battle; the Japanese authority arrests and tortures him despite his protest that he is innocent, so he is determined to exact revenge.