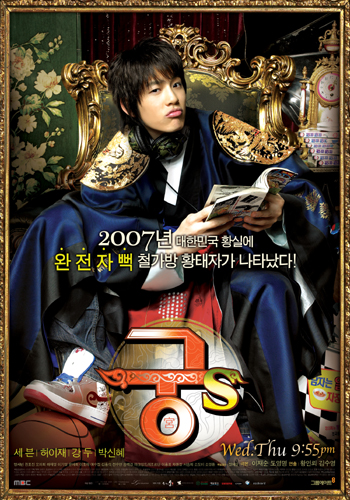 Her Royal Highness, the Queen, is still unwed despite being in her early thirties. Since she is an only daughter with no prospect of bearing a child in the foreseeable future, the royal succession is left in uncertainty when the current heir to the throne meets a sudden death. Seizing the opportunity afforded by this crisis, the conservative faction, which presently holds sway at the Court, begins plotting for the crown. Sensing the threat, the Queen secretly searches for a new Crown Prince outside the palace walls and discovers Lee Hu, a young man who has been making his living by delivering Chinese food, in complete ignorance of his royal heritage. Hu, who has never even dreamed of becoming the King, is unexpectedly ushered into the palace and subjected to strict training to become the royal heir. This is where the main action of “Prince Hours” begins. Lee Hu is forced to compete with Lee Jun, the perfect candidate for Crown Prince strongly backed by the extended royal family. The two young men vie for the royal succession as an intricate web of conflicts, plots, and schemes unfolds around them.

LKB May 19 2019 8:14 pm AhjuJuana: This is PRINCE Hours. Yoon Eun Hye was in PrinceSS Hours which aired exactly a year before this on the same network, hence the former being Goong and this being Goong S like Goong Sequel... It had inimitable Ju Ji Hoon as its leading man; this has Se7en. Goong calls in an unsuspecting student to wed a cold haughty crown prince because of their grandfathers' agreement and her family's debt. This brings a young man unaware he has royal ancestry into the palace for prince training aka Prince Hours... The names refer to the thousand hours it takes to become decent at this or that-in Yoon Eun Hye's character's instance the wife of a crown prince, in this case an actual prince.

vmarlany Jun 18 2015 9:02 pm the worst drama that i ever watch. the story is bad and the acting is worst.the main lead actor and actress is overacting. sorry but i can't enjoy this drama. i can't continue till the end of episode.

help someone Sep 06 2014 1:10 am Heya i'm for the first time here. I came across this board and I to find It really helpful & it helped me out a lot. I'm hoping to offer one thing again and help others like you helped me.

Senaida Jul 17 2014 10:00 pm Heya i'm for the primary time here. I came across this board and I in finding It really helpful & it helped me out much. I'm hoping to offer one thing again and aid others such as you aided me.

Neete Jan 01 2014 10:42 pm would be so much so much better if Park Shin-Hye or someone else is the leading actress. This Huh E Jae just spoilt the drama

nariIrfa Jul 31 2013 8:34 am it can be good or bad, regarding of anyone's tastes, but I can't help but feel this is good, truly because of the story. Some scene was funny, and the main being a loud-carefree cheerful boy make me find this interesting, different enough from other korean drama I have watch until now.:p and.. this is the first drama that get my attention! (maybe because I 'm just turned old enough to understand this at the time-_-..) except some series like princess hours or janggem because these are my favourite too but was introduced to me by my sister)

Dena May 15 2013 9:49 pm I really like this drama , Seven is good and handsome in this . It is not the worst drama as some as being saying , yes it does start off a little slow but it gets better as you watch.