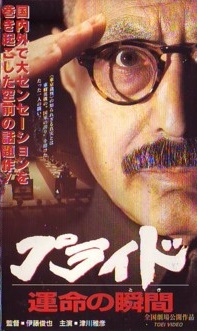 "Pride" is the story of Japanese Prime Minister turned WWII General Hideki Tojo, the accused class "A" war criminal who ordered the attack on Pearl Harbor. His struggle is seen through the eyes of his laudable wife, Katsuko, perhaps the only person to know the human side of Tojo - a family man, loving husband, and Samurai spirit with overwhelming pride, patriotism, and self sacrifice for his country. The story is set against the International Military Tribunal for the Far East, which tried Tojo and 27 other Japanese officials for war crimes. Courtroom clashes take charge as the defense counsel questions whether or not the Allied Powers, who are the victors, have jurisdiction to indict officials of the defeated Japan. The defense points out that if murder in war is an indictable crime, then the very man that ordered the Atomic bomb dropped over Hiroshima can be named and held accountable. But the sharp Prosecutor, Joseph Keenen, is set on using the Tokyo Trial as a platform to defend his country from future threats of Japanese militarism. By destroying Tojo's spirit and silencing the defense, even so far as cutting off Japanese translations of important testimony, Keenen's revenge is a forgone conclusion.

Phil Gaskill Dec 13 2010 8:02 am The first few words have the chronology backwards: Tojo was a prominent, high-ranking general (Major General in 1933, for instance) who became the Army Minister in July 1940 and then the Prime Minister of Japan in October 1941 (retaining the Army Minister position at the same time, by the way).