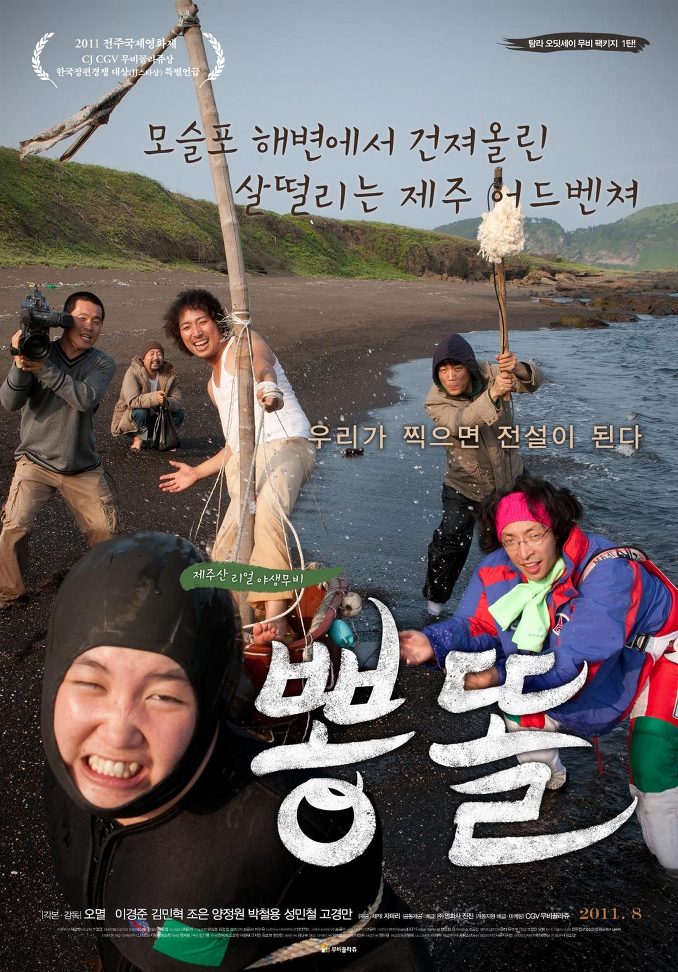 Seung-Pil (Kim Min-Hyuk), an actor from Seoul, travels through the island of Jeju. He then spots an ad for a movie audition. Having nothing to lose, Seung-Pil decides to attend the audition. He arrives in a crumbled building and sees only three other people: an old man with an acoustic guitar, a short man named Pong-Ddol (Lee Kyung-Joon), and a woman named Jo-Chun (Jo-Eun). It turns out Pong-Ddol is the director, but he doesn't have a script or camera, just an idea for a movie to be called "Fising Film".

Ki Sep 14 2011 10:29 am During the middle of the 2011 Jeonju International Film Festival I had a free day where the movies I wanted to see where not playing. I had a press pass to the festival and decided to check out the video room to to see if I could watch any of the movies on my to see list in their computer room. Since I didn't make an appointment all the bigger name films were already out, so going through the list of films in the "Korean Feature Films Competition" and asking for the 3rd or 4th different title, I finally got a film that was available. The name of the movie was "Pong Ddol" and I knew absolutely zilch about it.

When sitting in front of the computer that would play the film, I saw the reflection of another computer monitor directly behind me. From the rapid images flashing across the screen I could tell the movie was "An Escalator in World Order" which I had a vague interest in checking out during the festival. That movie looked interesting for a few seconds then it appeared it would be a bit boring and pretentious. Anyways back to "Pong Ddol".

Movie started up, setting looked sparse, a dilapated building without a roof. An odd man behind a desk. An equally odd woman standing around. An older man with a guitar nearby. Then this other chap walks in and it was apparent he came in for an audition and was caught off guard by these people who didn't look anything like "professionals" and the building itself, which looked like a bombed out structure from Dresden circa 1945.

Then the story kicked in and I was literally howling out with laughter throughout the movie! The wacky humor level was just off the charts and I seriously can't remember the last time laughing so hard from a movie (only other time .... maybe "Raising Arizona" by the Coen brothers?). After the audition scene in "Pong Ddol" the movie goes into full gear as the ragtag film crew attempts to make their first indie film and it's absolutely f****** hilarious!!!

Meanwhile I noticed from the reflection on my monitor that the person watching "An Escalator in World Order" was dead asleep (her head was leaning at a perfect 45 degree angle to her right).

Back to "Pong Ddol." The movie is without a doubt the highlight for me at the Jeonju International Film Festival. That's really saying something because I thought Kazuyoshi Kumakiri's "Sketches of Kaitan City" was a breathtaking film. Perhaps it was not knowing anything about "Pong Ddol" ... or maybe the brilliant script? Or the always on time delivery of the comedic parts? Or the movie's budget was very little and relied on sheer ingenuity? Who knows, but "Pong Ddol" just impressed me beyond expectations and I can't wait to catch it again sometime down the road. Movie of the year for me.