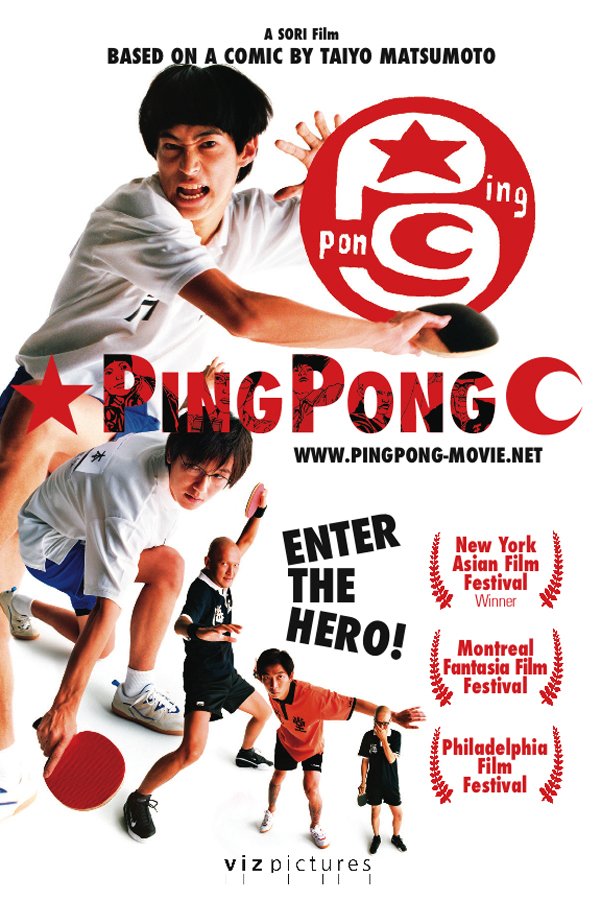 As children, the introverted Smile was being bullied by a gang of kids until the brash Peco comes by and chases all of them them away. Peco then takes Smile under his wings and teaches him how to play the game of ping pong. From there a life long best friend relationship comes into existence between these two polar opposite kids.

Fast forward a decade later, Smile and Peco are now about to compete in a high stakes regional ping pong tournament. While Peco has always wanted to be the best ping pong player in the world, he has never had the drive to fully devote himself to the game. Rather than finding him practicing in the high school gym you would more often than not find Peco hustling other kids out of money at the local ping pong parlor. This is in contrast with Smile, who has the god given talents to actually become the world’s best ping pong player, but is to humble to destroy his opponents. More often than not he allows his opponents to win points and even entire games out of sympathy for them.

Now these two best friends try to deal with their own inner turmoils, as they move further and further into the regional ping pong tournament. Peco has to overcome a knee injury while trying to rediscover the fun aspects of the game of Ping Pong. Meanwhile, Smile now seems to have gained the killer instinct by going through a rigorous training regiment instilled by his high school coach. As the tournament progresses it becomes more likely that these two best friends will face off against each in the final match.

Ki Jan 30 2011 7:02 am A few years back I had a copied version of â€œPing Pongâ€ sitting on my hard drive in the media center computer I had set up in my living room. I had intended to watch the movie for months, but never got around to it, thinking the movie would be just silly. Eventually my roommate at the time watched the movie before I did and enthusiastically raved "Did you ever see that movie Ping Pong? It was amazing!" With that positive endorsement I immediately checked out "Ping Pong" and was blown away from the get go with Peco jumping off a bridge, while exclaiming "I can fly!!!!!!!!!"

There’s many things to love about this movie and the first thing that comes to my mind would be the awesome Ping Pong matches that were shown in the film (especially during the second half). With the help of CGI enhanced graphics and various camera tricks you could not help to be amazed at what unfolded before your eyes. The matches that occured during the tournament felt as compelling as watching an actual live championship sporting event. From the fast action shots to the slow motion close ups where you could see the ball hit the paddle and then spin in the opposite direction, the matches were just breathtaking to watch.

The story & characters in Ping Pong were just as compelling as those CGI enhanced Ping Pong matches. No doubt, Smile (played by Arata), was often tormented by others as a young kid and this was what made him so withdrawn and shy (he got the nickname of Smile because he never smiled). Furthermore, the type of abuse he endured as a kid was the type of humiliation he could not bring onto others, even if it occured during a game of Ping Pong. As graceful as the game of ping pong can be, Smile found the act of "chopping" or "spiking" the ball (so the opponent would badly miss), similar to the type of taunting that he endured as a kid. Peco (played by Yosuke Kubozuka / Go) on the other hand was the polar opposite to Smile’s introverted personality. Somewhat the Allen Iverson of Ping Pong, Peco loved nothing more than talking trash to his opponents and displaying the type of acrobatic flair that would often make his opponents look silly. Furthermore, he hated to practice and initially frowned upon authoritarian figures. It was inevitable that these two would face off in the end, yet this was appropriately anti-climatic to what happened before that final match. There’s also tons of other interesting characters like Dragon, Kong, and the Coach.

Dragon was the fearsome bald headed ping pong player who often practiced until his hands bled. He isolated himself in the bathroom before every tournament match. When his former teammate Sakuma goes to talk to his friend in the bathroom near the end of the tournament, it becomes evident why Dragon isolates himself before every match. The reasons has nothing to do with Zen like mysticism or anything overly complicated, just simple Fear. Kong was a Chinese ping pong player, who emigrated to Japan after not being able to make the national team in his native country. Although Kong endured much verbal abuse from his coach and fellow Japanese students, he was able to handle himself well enough to become one of the top challengers in the final tournament. A scene that stood out in my mind was the moment when Kong talked to his coach on top of a building next to the gym where a ping pong match was occurring. Just from listening to the sound of the ping pong they could discern so many things about the match and the players itself. Smile’s coach (played by Naoto Takenaka - the teacher from the Swing Girls) was also very good playing somewhat of a more hokey version of the Burgess Meredith character in Rocky.

The soundtrack to Ping Pong was another great aspect to the movie Ping Pong. The soundtrack provides a broad range of music that suits each scene particularly well. From simple piano pieces to sparse acoustic instrumentals to pumping techno music during the final tournament matches the soundtrack was simply awesome. Perhaps the soundtrack stood out even more this time around as I watched this movie on my laptop with the use of a quality pair of headphones. Personally, I would love to find out who the band/singer was during the scene where Peco and Sakuma were talking to each other on the bridge.

I would say don’t make the mistake that I did initially, by avoiding "Ping Pong" because it centers around the game of ping pong. The story of Smile and Peco draws you in immediately and it gets even better as the cast of supporting characters are introduced. Once the final tournament begins, the movie then shows some amazing cgi enhanced ping pong matches. At this point you can’t help to be floored by the awesome movie known as "Ping Pong" Enthusiastically recommended.