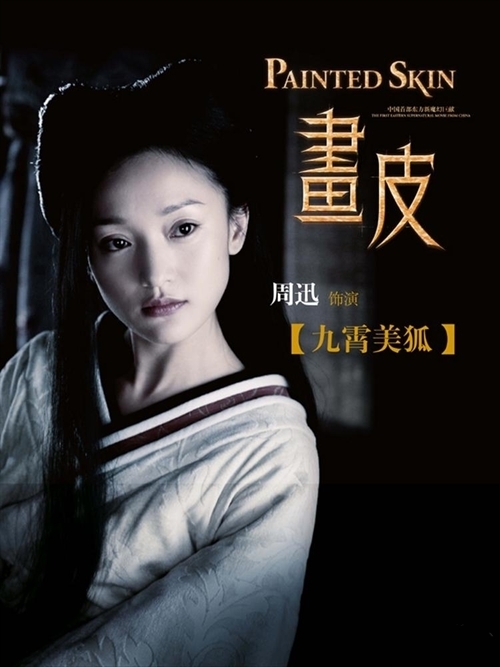 In China 2,000 years ago, General Wang captures Xiaowei (Zhou Xun), a woman of unsurpassed beauty. Soon after Wang brings her to his castle, she starts to attract people with her beauty, which makes Wang's wife (Vicki Zhao) suspicious. At the same time, dead bodies are discovered around the castle with their hearts missing.

Review by Neo: The ultra screen beauty of the early 1990s was undeniably the ambassador of ghost/romance movies, Joey Wong. Its been a long time coming since those comedy/spooky/ghostly/romance/action genre. The good news is that The Painted Skin's ability to revoke those kind of unique feelings, while the end product may not be the same. That's not to say The Painted Skin is not a good movie, as the current reviewer thoroughly enjoyed the ride, but in the end, it just feels a little too forgettable. Carried by the consistently good actress in Zhou Xun (who have now developed a reputation for being head and shoulder above her given material) who attempts to follow the foot step of Joey Wong and adding to the pot of fire is an equally impressive return to form by Vicky Xiao Wei. Perhaps the downside is easily Alloy Chen (Playboy Cops) who appears to be miscasted in a role born to be played by say, Liu Ye (Connected). Adding to the mix is the overacting of Donnie Yen (who is intentionally funny by overacting, rather than in Seven Swords where his limited emotional range became more laughable than all the jokes added up together in that flick.

In many ways, Painted Skin feels like The Promise, it allows the audience to totally disband their beliefs and escape into another world, namely a "dream". While Neo was one of the few people who actually liked the uneven and largely acclaimed "disappointment", The Promise. The Painted Skin fares even between and sometimes it is just fun to live within a dream. Perhaps fans of action cinema would have expected more, as one would expect in a Donnie Yen's flick. In fact, this isn't a Donnie Yen film where he grins, kicks ass and ultimately kick more asses, but rather, at its core, a love story, a light hearted genre mixture of action, ghosts and comedy. Quite simply revoking those days when movies like A Chinese Ghost Story are still in existence. Then again, when a movie leaves you thinking about Joey Wong, it really can't be half bad.

There is no doubt that Mainland starlet, Zhou Xun is a shinning star. Ever since Neo first associated with Zhou Xun in Fruit Chan's Hollywood Hong Kong, he knew that there was something special and her display in Peter Chan's Perhaps Love enhanced her reputation to mainstream Hong Kong cinema. Although Zhou Xun does not possess the sweetest voice, her vocal is distinctive, easily recognisible and really something of an acquired taste. Her looks are pretty, but pale in-comparsion to compatriot Fan Bing Bing. Still her acting, her screen chemistry, her sheer screen presence makes Zhou Xun easily one of the better actress in Hong Kong cinema now. Here, she performs to perfection, the cross between humanity and evil, and her ability to allow the audience to sympathesis with her character is not something that everyone can achieve. Cliche and cheesy as the finale may seem to be, the current reviewer is leaning towards liking it.

If there is one aspect about reviewing movies that Neo enjoys is the part where he gets to talk about performances. I fondly remember way back in 2005, Koma provided a moment for two acting queens in Karena Lam and Angelica Lee and likewise, Painted Skins goes head to head with Zhou Xun and Zhao Wei. The Shaolin Soccer girl (Zhao Wei) performs more than amirably and certainly a trumphant return to form. In arguably a much more difficult role than her counterpart, she still manages to engage the audience and maintain some believability within the dream.

Donnie Yen has come a long way since those Shanghai Affairs and Legend of the Wolf days, but it is not surprising that while his screen presence has increased dramatically, the same cannot be said about his acting. Luckily, The Painted Skin does not require Yen to act and the result is one of Yen's better comedic display in recent years. Remember the time when Yen tried to emotes in Seven Swords, it was unintentionally laughable, here, Yen deliberately overacts and the effect is the audience laughing with him, rather than at him. As for Alloy Chen, it just goes without saying that he still have a few notches behind the girls. Perhaps his good looks overshadowed his already non-existent performance. While it is adequate, there are not sparks and his chemistry with Zhao Wei comes up lacking. Fearless's Betty Sun makes her second film and passes with flying colours. Her lively performance, brighten up the film in all corners and somehow manages to romance with the "non-romance-able" Donnie Yen.

All in all, Painted Skin ends up being good cinema, due largely to the performances of the two leading actresses. There is no doubt that Skin gains even more sympathy points for alluding to those early 90s genre movies. So what's wrong with Painted Skin, maybe you can argue about the lack of action, lack of a storyline or even the believability factor. However, Neo seems to think otherwise, as Painted Skin feels like a dream. Not entirely a successful movie, but certainly any movie that reminds the current reviewer of the sheer beauty of Joey Wong, really can't be too bad… (Neo 2009)

Ki Nov 03 2008 3:43 am "Painted Skin" draws you in with it's recognizable list of performers (Vicki Zhao, Xun Zhao, Donnie Yen) and gives off an air of mystique with its movie posters and unique storyline. Loosely based on the classic Chinese short story "Strange Stories From A Chinese Studio,""Painted Skin" revolves around a female demon that feeds off of human hearts to retain its human like skin. The movie takes liberty to add several of its own plot twists, the major one being a Gothic love triangle of sorts with the demon's desire to win the heart of General Wang and take the place of his wife. "Painted Skin" is certainly not a classic (occasionally having more in common with b-films rather than the better Chinese epic period pieces), but it does ramp up the intrigue factor nicely as the story progresses. In other words, "Painted Skin" is light years better than "An Empress and the Warriors" and proudly atypical from the flood of Chinese epic period pieces we have seen this year.

In "Painted Skin" (set somewhere in China's first century) General Wang takes interest in a bewitching woman named Xiaowei (Xun Zhou) , while raiding one of his enemy villages. Wang believes Xiaowei to be a captive of his enemies and decides to take her back to his kingdom and have her work as one of his maids. Once Wang brings Xiaowei back to his kingdom, his wife Peirong (Vicki Zhao) feels a mixture of jealousy and apprehension with the new maid. Shortly after Xiaowei is brought back to Wang's kingdom, a rash of murders suddenly occurs, with its victims' hearts missing.

Peirong then has suspicions that perhaps the lovely new maid may be the cause of the murders, but her husband doesn't buy into her theory. In desperation, Peirong turns to one of her husband's closest allies, Yong (Donnie Yen), to investigate the sudden rash of murders and Xiaowei herself. What Yong soon discovers is that the beautiful Xiaowei is a demon that feeds off of human hearts to retain her humanlike skin.

Stylistically the film's director, Gordon Chan, seems to go out of his way to make it known "Painted Skin" isn't China's next film for the European art-houses or film festival circuit. Rather, the film is a star laden commercial endeavor that works on basic levels (romance, adventure, and touches of comedy) to please the masses. If anything, the casting of Donnie Yen tells you all you need to know about its art vs. commercial aspirations.

While the film starts off with a thud, mediocre battle scenes with Donnie Yen twirling around the identical sword from "An Empress and the Warriors," once all the introductory scenes are out of the way and the main characters dive into the meat of the story, "Painted Skin" gets infinitely better.

Vicki Zhao's performance would be the most noteworthy, simply because she steps out character (cutesy girl roles) and does a commendable job recreating all the angst found in her Peirong character. This is more impressive when you think back to her previous role in "Red Cliff" and how miscast she seemed to be in that film. Meanwhile, Xun Zhao effortlessly comes alive in the pivotal role of Xiaowei. Nice thing with her performance was the amount of humanity she was able to instill in her villainess role. Kun Chen was just as charismatic in his role as General Wang and he would have been even more appealing without the excessive makeup and airbrushed close ups. Lastly, Donnie Yen proved again he isn't Lawrence Olivier but can perform action scenes almost second-naturedly.

What "Painted Skin" did so well is to gradually crank up the drama factor as the movie progressed. At its climax, the movie pulls out a mixture of Greek tragedy and soap-opera melodrama that sounds cheesy on paper, but worked surprisingly well in the film. During these moments, I found myself genuinely touched by their actions and the amount of love they displayed felt downright inspirational. This one should appeal to a whole lot of folks.