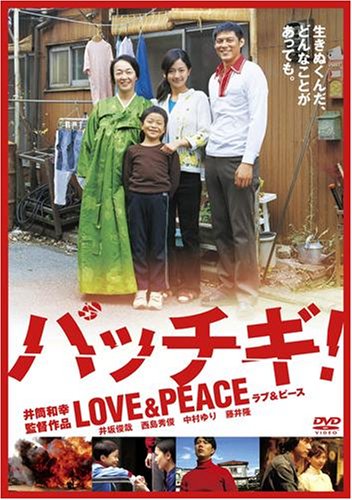 He (Kazuyuki Izutsu) uses two story lines to slam home his points. One is the struggle of An Sung's sister Kyung Ja (Yuri Nakamura) to rise in the 1970s' Japanese movies, which may be full of zainichi talents but forbids them from revealing their backgrounds (though other zainichi know exactly who they are). Taking the all-Japanese name Yuko Aoyama, she works hard to succeed in an often degrading trade, with the goal of sending her nephew to the United States for expensive treatment.

On the road upward she finds support and more from a nice-guy star (Hidetoshi Nishijima), as well as a tempting offer of a big role from a sleazy producer (Lasalle Ishii). His movie, however, is a flag-waver glorifying the tokkotai (kamikaze) pilots — an obvious dig at "Ore wa, Kimi no Tame Koso, Shi ni Iku (For Those We Love)," the new tokkotai drama executive-produced by Tokyo's rightist governor, Shintaro Ishihara — though examples of similar pics from the film's era abound.

The film also tells the parallel story of An Sung and Kyung Ja's father, a Korean conscripted during the war who fled with several companions to avoid what they regarded as certain death and ended up on a South Pacific island — where the Japanese Army happened to be stationed. Izutsu uses these adventures to show us, minus the self-imposed blinders of the typical commercial filmmaker, how the Japanese Army treated Koreans and other subject peoples. "Subtle" is not an appropriate word to describe his style, but this section offers a sharp rebuttal to the war romanticists, as they go about their god-given task of indoctrinating young people with good old-fashioned yamatodamashi (Japanese spirit).