Once Upon a Time in High School 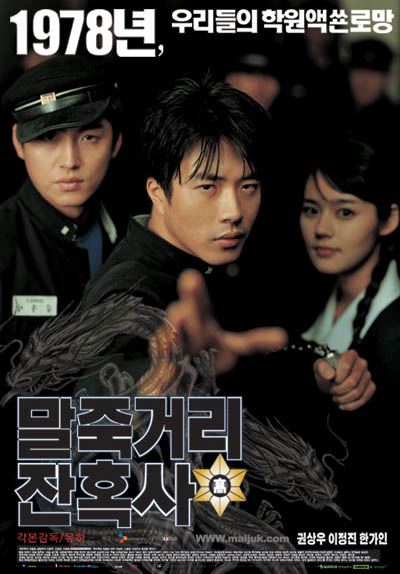 In the spring of 1978, Hyun-soo (Kwon Sang-Woo) transfers to Jungmoon High School in Kangnam where his mother thinks the land price will skyrocket due to the development of the area. Yet, Jungmoon High School is notorious for its severe corporal punishment by teachers and power struggles between school gangs. On the first day, he gets spanked with an aluminum baseball bat for violating the school¡¯s dress code. Then, one day, he plays basketball with his classmates and brings his team a victory, which allows him to become chummy with Woo-sik (Lee Jung-Jin), a kingpin of the school. Before long, they find out that they both are huge fans of Bruce Lee and become best friends.

After school, on the bus, Hyun-soo and Woo-sik see a girl who resembles Olivia Hussey, the most popular foreign actress in Korea at that time. Her name is Eun-ju (Han Ga-In), a senior at a nearby girls high school. Both fall in love with her at first sight. Hyun-soo is gentle and kind, while Woo-sik is tough and charismatic. Knowing Woo-sik is so different from her, she can't help but becomes attracted to him.

Hyun-soo endures the pain of his secret love for Eun-ju. However, Eun-ju and Woo-sik begin to bicker over petty things. While she's in pain over Woo-sik cheating on her, Hyun-soo sees a chance to win her heart. In the meantime, Woo-sik and Jong-hoon (Lee Jong-Hyeok), a student patrol captain, get into a fight. In the duel, Jong-hoon cheats and beats up Woo-sik, who leaves school in the aftermath of his defeat. With Woo-sik gone, Jong-hoon abuses his power as student patrol captain and bullies whoever gets in his way. Hyun-soo falls into an Inferior Class, and Jong-hoon keeps bullying him. The corporal punishment and favoritism by the teachers gradually become worse. To make matter worse, Eun-ju chooses Woo-sik over him. Driven to the wall, Hyun-soo explodes. With nunchakus tucked in the back of his pants, he goes up to the roof after Jong-hoon.

crushonyou Dec 09 2015 5:44 pm I always wondered what the girl wanted to say at the end. It just got me too curious, but then I realized that it doesn't matter anymore because it's all in the past. You can only look at the past, and not provoke it.

maia Jun 28 2012 7:18 pm i just loved KSW in My Tutor Friend. the movie was great. the role of a troublemaker fits him well. his smile captivates the viewers. after watching his movie, ive researched about him and only found out he's married. best wishes to you & your family.