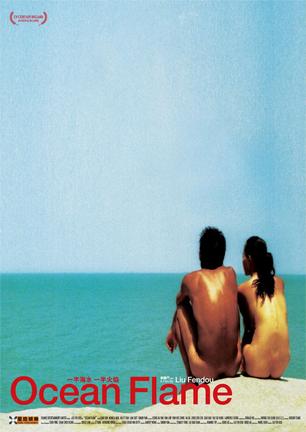 Wong Yiu was a very shameless person and a blackmailer until one day he met a waitress named Ni Chen. He thought Ni Chen was like any other girls that could be controlled by him, but her stubbornness was way beyond his imagination.

As time goes by, they both lost their ways and losing themselves in the process. He was not as free as he once was. Insanity causes him to end her life.

Eight years later, Wong Yiu stepped out from the jail. He carried a gun and went to look for Ni Chen's mother at her home wishing to fulfill his own will.

Review by Neo: Comparing Ang Lee to somewhat arty director Liu Fendou may seem quite far-fetched. One is an established international superstar director who has worked with some of the work’s best actors, not to mention, his films are huge box office hits across the Asia and beyond. While Lu is on to his second feature film and his films never seem to reach an audience beyond the arty style fan base. In a matter of fact, it is two very different films. So why did I bother mentioning the two in one sentence. The thing is, there are subtle similarities when you begin to look more closely. First, both lead actress takes their art seriously and are not ashamed of showing off their beautiful naked bodies for millions (for the case of Tang Wei) and probably thousands (in the case of Monica Mok) to appreciate. Without being a pedantic, one would assume that I compare all movies, where the lead actresses are stripping and put it in the same line as Ang Lee’s masterpiece, there is more to come. Second point is, both films show how deadly lust can be and what impact it can have on the human’s both literally and physically. Finally, in both films, the lead actresses both seem to have the same fate and both directors uses strong, aggressive sex to convey a deeper meaning in their respective ways.

The movie is basically about a bad guy who is a pimp who uses prostitutes to prey on unsuspecting males living in a luxury hotel and in the midst of their romp; he and his team would pop in and charge the male of adultery in raping his fake “wife? After some bashing, the bad guys will receive money and then the bad guy meet good girl and the movies start to take off. Good girl have sex with bad guy, who leads to becoming partner in crime and then the relationship goes deeper and deeper, just as the girl is sinking deeper into the darkness she entered.

I guess, most of you are waiting for me to talk about the daring debut performance from Monica Mok. Monica performs extremely well in a role that requires a lot more than just body flashing. There is certain vulnerably within her eyes that make the audience feel for her audience. Her lust/love for the con-man/pimp (played by Liao Fan) is at the very least passionate if not exactly convincing. There is some chemistry between the two, but somehow, it just lacks the intensity whenever they are not rooting each other. A stunning debut, by all means Monica probably deserves for a nomination in the Best New Artist category. Still, I must mention that although Mok may not be as charming as Tang Wei, there is no doubting that Mok have a somewhat better body and shape. A notable memorable scene is the way the two interact and strip down on the edge of the cliff, with the beautiful blue sea and sky in the backdrop. In fact, it will be worth rewinding back to that scene, as the credit starts to roll.

There is almost no point comparing the pimp/con-man with the incomparable Tony Leung Chiu Wai. There is no question that Liao Fan is not in the same league, but somehow, he is able to display the sort of dangerous or unpredictable character/presence that is so vital to his role. As mentioned before, there is certainly some moments of chemistry between Liao and Mok, but it only seems to last mostly within the sexual tension. The real issue is that Liao seems far too distant for the audience to relate and not a bit likable for the audience to be affected. Perhaps it is the requirement of the role, but unlike Tony Leung in Lust, Caution, the audience may feel somewhat distant to Leung’s character and at the same time is able to understand the motivation behind his actions. Perhaps, it is attributed to the director far too arty direction, which in other words, meaning rather staged than natural events.

I must compliment on the director Liu for shooting and in the process glorifying the beauty of the island of Hong Kong. The blue sea, blue sky, and smoothness of the sand portrays everything is that good of Hong Kong, including the lavish hotel rooms, wealthy Hong Kong males, as well as the freedom of riding on an empty bus within the streets of Hong Kong. Politically incorrect, I must say, since when does Hong Kong have sky as blue as that and it must be a long time running since the sea is unpolluted. Riding on an empty bus in Hong Kong is as far-fetched as seeing human beings in the country areas of New Zealand. Still, the film is polish in its display, production and from top to bottom, feel extremely well-produced, excellent paced towards it niche target audience, being mainly art house fans. Some credit must be given to producer, Simon Yam for investing in this work and his cameo in the film as the cop, is more than a welcome addition.

All in all, Ocean Flame is unlikely to win any awards, but there is no doubting that it is already a template for showcase in art house film festivals. It is thereby that lays the difference between Ang Lee’s far superior, Lust, Caution, which generated a buzz across every possible known human species around Asia. Comparing to an immensely vaster budget production is not fair, but if Monica Mok has to undergo the type of art she is willing to take, maybe she would prefer it being watched by millions rather than thousands. Art house films will always have a place within Hong Kong cinema, but even if it does, it will always be a small one. It is unfortunate that the film never rises above the arty style to become somewhat connecting to the awaiting audience, but it is also difficult to mention what else is required to make it better. Still, there are moments in the film to admire, enough sex and flashy nude sequences from the perfectly shaped upper body of Mok going down to her curved lower body. But in the end, it is still a matter of taste, the fast paced society of Hong Kong will in masses prefer watching Tony Leung and Tang Wei making out in the half art and half commercial world, rather than two virtual unknown hotting it up in the fully one hundred percent arty world. For me personally, I wouldn't mind seeing Monica Mok taking on Tony Leung one day … (Neo 2009)