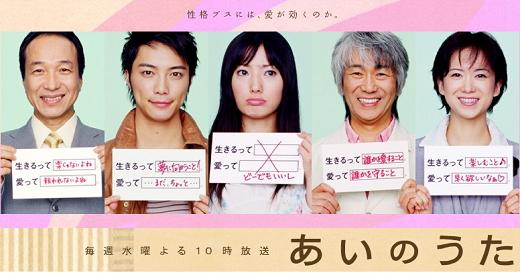 YokoMatsuda (Miho Kanno), a 27 year old girl with a very bad personality, lives an unfortunate and unhappy life. Born unwanted, her father is unknown, and she has never received love fromhermother.Because of this situation,Yoko grew up with a bad personality.She wasmean and gloomy, and she'd have a fit if she didn't get what she wanted. One day, after being dumped by her boyfriend,Yoko gets sick of her unfortunate life. She goes to a bridge and jumps into the river...Yuji Kataoka (Koji Tamaki), a former detective, had been assigned to his new department.He lost his wife three years ago, and as a father of three,he chose to transfer to a department without overtime working so he can spendmore time with his children.One day,while drinking with his co-workers Yusuke Yaginuma (Hiroki Narimiya) and Hideki Iizuka (Fumiyo Kohinata), a drenched girl came in barefoot. After drinking up a glass of beer, she fainted suddenly.Yuji took her to the hospital, and had then found out that she had tried to commit suicide.Waking up in the hospital,Yoko realized that she was unidentified.Thinking shemight be able to live a different life, she pretended she lost hermemory.Yuji,not wanting her to ever commit suicide again,decides to take care of her until hermemory recovers.Taken to the Kataokas,Yoko sees love, laughter, and warmness filling the family. All of what Yoko had never experienced in her life.Although she hates children and dogs, she starts her new life with the Kataoka family.A heart-warming story about a lonely, unloved girl who suddenly starts a new life with a family full of love and happiness. A story that started form a lie turns into an unexpected ending... -- NTV

Clarkdale44 Dec 04 2013 5:20 pm A very heart touching story, great casts and their performances. I don't know if i should call this romance or not, but it was very realistic in its own way.. I am very much impressed with the reality of this drama... I just finished watching last episode and i am in the burst of my feelings. If i say anymore it will just be a spoiler, but if you like romance/family drama then i bet you won't regret watching this one. I am glad i found this drama and watched it. I will give it 9.8/10