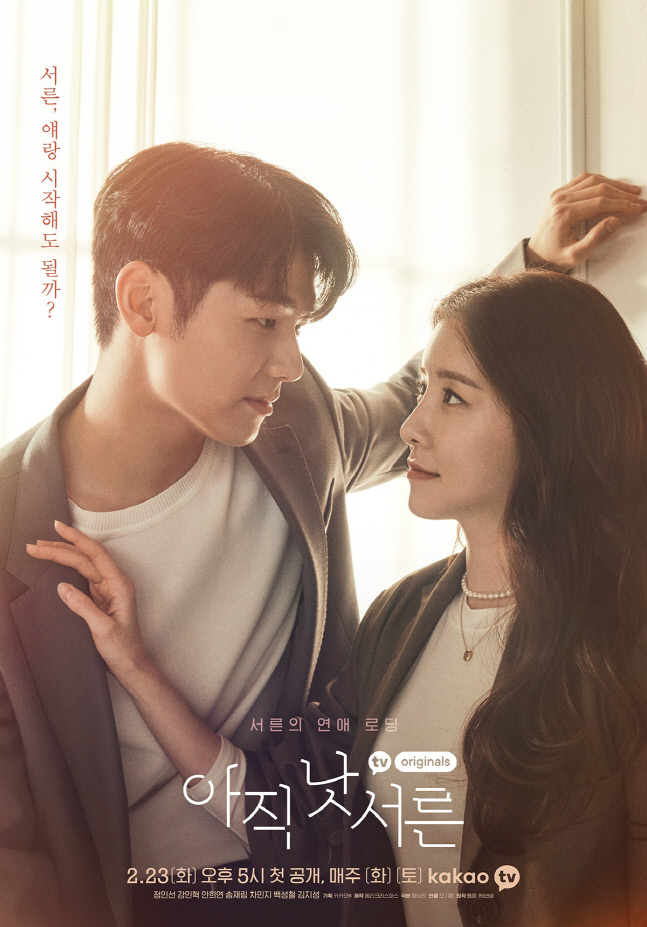 "Not Yet 30" follows the lives of three female friends in their 30's.

Seo Ji-Won (Jung In-Sun) is a popular webcomic writer. She visits the publishing company office of her webcomics. There, she meets her first love Lee Seung-Yoo (Kang Min-Hyuk). They knew each other in their middle school days. Lee Seung-Yoo now works as an assistant manager for a planning team at the webcomic publishing company. Meanwhile, Seo Ji-Won gets involved with Cha Do-Hoon (Song Jae-Rim), who is directing a movie that is based on her webcomic.

Lee Ran-Joo (Hani) works as an announcer. Hong A-Young (Cha Min-Jee) runs a cafe. One day, Hong A-Young’s ex-boyfriend appears in front of her. Meanwhile, Hyeong Joon-Young (Baek Sung-Chul) works part-time at Hong A-Young's cafe. He has feelings for announcer Lee Ran-Joo and confesses his feelings to her.

corpse bride Sep 04 2021 8:29 am The ending??? Watched this for the cast but felt unsatisfied with the story. I think the ending was too abrupt. Still worth the watch tho!! ++ Joon-Young & Ran-Joo's story was so cuteeee <33

Teleri May 29 2021 11:25 pm So, I watched this for Song Jae Rim & Minhyuk, & they did well. I loved the side stories. But the female lead, and that supposed GF of our ML? OMG I wanted to slap both of them for most of the last 6 episodes! WTF? I hate whiny spineless females a lot, and that's what our FL was once confronted with this immature little girl. This is something BTW that happened to ME once - a guy I'd not only dated but moved in with in fact. A girl showed up at my house demanding me to kick him out and yelling at me for taking him away from her! I laughed at the creature, and told her that it was all on the Guy! Now, I also should have sat this waste of space guy down later to find out what was going on and possible end it with him for lying to me, but that would certainly not have been because ordered to by the other girl, nor did I in any way shape or form feel Aologetic. Cause I had no clue - I'd been lied to. So was our FL, yet did she actually point out that the ML was at fault, even once??? Why, no! She did break up with him, but failed totally to ever have a conversation about his behavior! Then when that immature little girl, who was never really the ML's serious GF in the first place, spreads lies - and YES they were Lies!!! - online to almost ruin the FL's career - WTF? She can't open her mouth at all? Not to anyone? She just runs, hides, cries, wears a hair shirt, Apologizes to the girl? Now that did strike me as mature, BTW. The FL saw that little girl as similar to herself, and so that conversation with her was very realistic. It's just sad that neither of them brought up the elephant in the room - ie that this guy lied to BOTH of them. I approve of the ending, BTW, but I really was screaming at the TV over these two females :(

Maxine Colby May 13 2021 5:22 am I think is a simple light hearted kdrama if u are just starting to watch one for for first time . It could be this is a writter for high school students . Whats the verdict  ?!?! I don't know she became 30 but her decision was based on the bashers and haters they got through online and never fought about her true feelings for her 1st love .?!

I ,therefore conclude that Koreans are mainly " haters and bashers" hahaha what a way of life. In this kdrama it shows how powerful their voices are to ruin a " personal life " of an individual . They are not celebrities here but mainly they are just Webtoonartist and editor ...then someone spread a rumor/ gossip about her and bloom end of love life?!!?

Sad ending I need justice will there be part 2 ?!?! hahahaha?

Gabriellaqatar May 13 2021 5:18 am Think is a simple light hearted kdrama if u are just starting to watch one for for first time . It could be this isnwritter by a new writer for high school students . Whats the verdict  ?!?! I don't know she became 30 but her decision was based on the bashers and haters they got through online and never fought about her true feelings for her 1st love .?!

I ,therefore conclude that Koreans are mainly " haters and bashers" hahaha what a way of life. In this kdrama it shows how powerful3 their voices are to ruin a " personal life " of an individual . They are not celebrities here but mainly they are just Welton artist and editor ...then someone spread a rumor/ gossip about her and bloom end of love life?!!?

Sad ending I need justice will there be part w hahahaha?

Gee Apr 20 2021 12:51 am I love everything about this drama unless the amount of unnecessary repetitive flashback romance scenes between seung yoo and ji won ? But this is like... the most realistic kdrama i’ve ever watched during my 12+ years career as kdrama aficionado (lol) and honestly i couldnt ask for better ending ?

Ran Apr 19 2021 7:01 am I watched this for Song Jae Rim. Can't believe I got hooked in this web series. I usually don't watch web series, but the story turned out to be so relatable. I love it being so realistic and yes most of the time, cheesy. Idk maybe because I'll be thirty this year but I never experience any kind of romance portrayed in here. I guess I want the love story of Ran Ju because I tend to like younger guys. Lol

ym Apr 15 2021 3:24 am Terrible ending. Seung Yoo is not married so it is not consider having an affair. He is in love with Jiwon again after re-union. He has no chance to explain to Jiwon when Jiwon hated him. Too sad.

Petra Apr 12 2021 9:33 am Ella, I can`t agree with your complaints! There`s no need to ask - s.o. should Never start s.th. new if he hasn`t finished the old thing. Keeping two doors open can never work and this is a methaphisical law. Lee Seung-Yoo does not act like a real man - he doesn`t act straight and can`t draw boundaries - so the suffering is the logical outcome of his behavior and weak character. BTW all the time I saw in his eyes that he is not fully honest. One has to be able to draw lines - otherwise his life will be a mess.

Regardless of my comment below, overall I'd recommend this drama as a drama to watch on a Saturday afternoon. It's short, features a good cast, and has some good lessons tucked away in the stories.

I liked this drama form the start but the plot...hmmm...I mean did we really need to use this plot again. I got where Jiwon was coming from but the level of mad she had towards Seungyoo was unfair.

She never asked him if he was dating someone and things happened so fast between them that the situation ended up like it is now.

Now, here we go going after her job.

I never understood how the partner could be blamed for an exes behavior in dramas, especially when they display the level of obsessiveness that Hyeryung showed.

I'm also sad for Jiwon's blaming herself as if she really had an affair.

My wish for future dramas, if they're going to use this sort of plot, is to flush it out a bit more. There's a lot of things that all involved could've done better; Jiwon could've asked Seungyoo about Hyeryung when she first suspected, and he should've told her about his girlfriend from the beginning.

Notice he always "asked" if she had a boyfriend but she never "asked" if he had a girlfriend. I wonder if writers included it that way for a reason.

It just really sucks that Jiwon is suffering when all she wanted to do was love again. I think I would've preferred them to go with "he has a child" plot rather than use the "Jiwon had an affair" plot.

I know it's a drama but it cuts deep when I see people getting hate like this in dramas especially when they don't deserve it.

I hope it works out for Jiwon in the end and at this point I don't think she should end up with Seungyoo. Too much has happened.

Janine Feb 25 2021 7:11 am Great start but im honestly watching this because of Song Jaerim hahah

Jaz Feb 22 2021 1:46 am Excited for the premiere tomorrow. I want to watch this coz 2021 is full of time travel, action , thriller and teen /school dramas. Badly need a light-hearted one esp.this romcom.

Mars Feb 16 2021 4:03 am Omaiga! I love the webtoon story, I hope the drama could depict it well and make it even better even with alternate plot than the original webtoon^^

Iris Feb 08 2021 11:31 am Looking forward to this drama. I'm excited for Kang Minhyuk's return to acting. He shines the best when doing his craft. I don't have much expectation with the drama but I really hope it will do well.