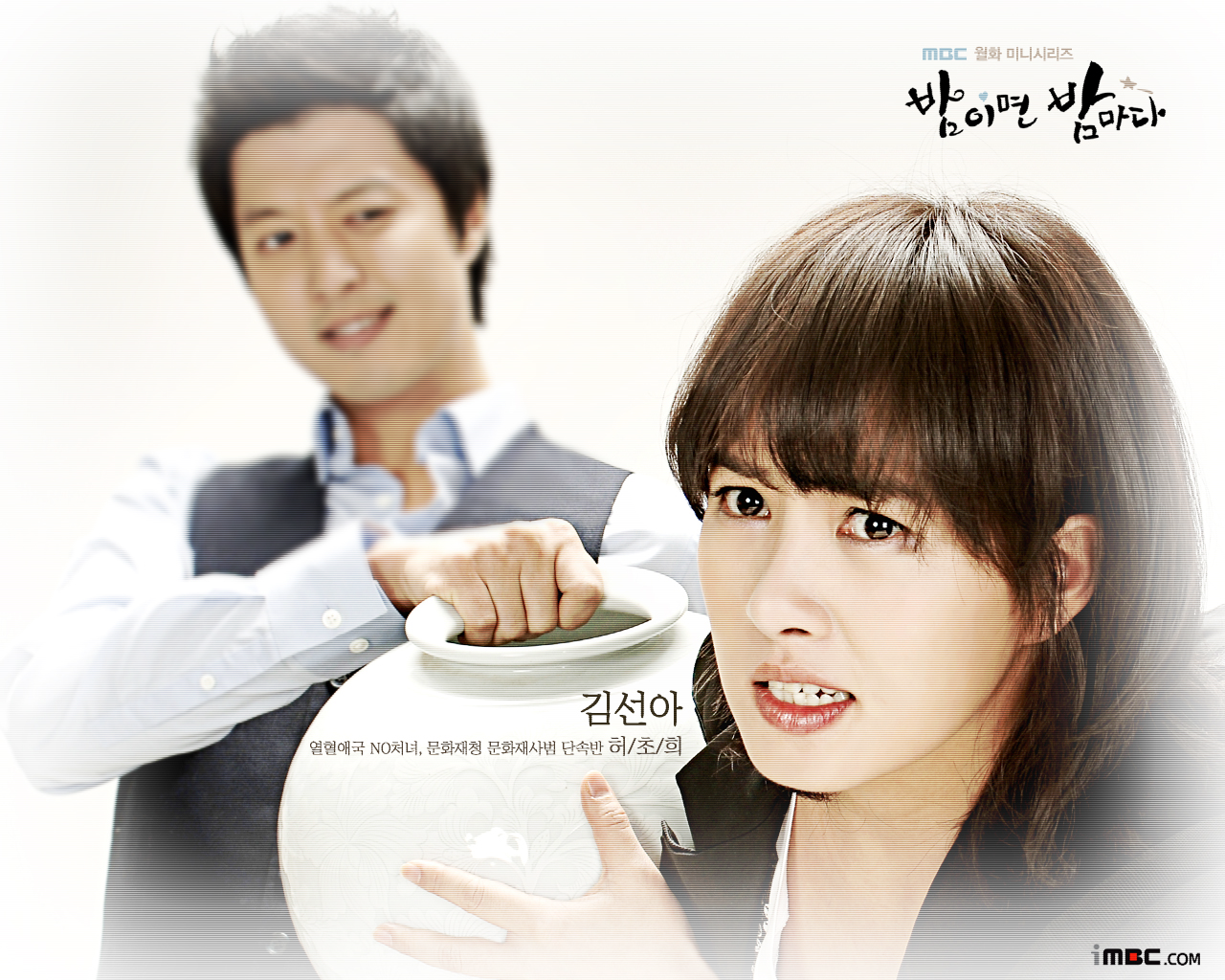 With handsome looks and expert knowledge in ancient art, Kim Beom-sang (actor Lee Dong-gun) is a college professor and co-host of a popular antique TV program. A simulation exercise is conducted at the National Museum of Korea to test the security system and security guards. With guards and high-tech security systems patrolling every inch of the museum, Hur Cho-hee (actress Kim Sun-ah), an agent with the Cultural Heritage Administration of Korea, penetrates the museum’s security. Given a personal assignment from the chairman of a chaebol, Beom-sang heads to Japan and contacts an art smuggler to purchase a rare piece. Cho-hee also heads to Japan to break up a smuggler’s ring. Beom-sang and Cho-hee meet at a Japanese inn where they discuss a stolen vase, which leads them to shady bedfellows.

Beom-sang is bewildered to see so many people welcome him at the airport. He reluctantly hands over the national treasure he obtained in Japan to the authorities and is hailed as a hero and patriot. Since the media spotlight was on him, he had no choice but to give the white porcelain dish to the Cultural Heritage Administration of Korea. Cho-hee goes to a nightclub to apprehend Lee Yong-gu but Beom-sang interferes and she loses him. She is brought to the dance floor by Beom-sang where she reluctantly dances the tango.

Cho-hee welcomes Beom-sang who became the new advisor at the Cultural Heritage Administration of Korea and warns him that he’ll have his work cut out for him. Beom-sang feels the need to deflect Cho-hee so he spreads an indecent rumor about her, which blindsides her. Cho-hee goes to the studio to confront Beom-sang and retaliate... Meanwhile, Cho-hee hears from Beom-sang that the bihaedangjib was stolen from a powerful lawmaker’s home and she immediately looks for Mr. Hwang for a lead in the case.

Cho-hee and Beom-sang were unable to catch Seo Gyu-chul, the person who stole the bihaedangjib, right under their nose and the Cultural Heritage Administration of Korea is in turmoil. Meanwhile, the police task force and agents from the Cultural Heritage Administration of Korea go to a charity event to find the stolen bihaedangjib. Shi-wan is surprised to see Cho-hee wearing a stunning outfit.

Kim Sang (actor Kim Byeong-ok) realizes that a sting operation is underway at the charity event and he has the auctioneer stop the auction of the bihaedangjib. Cho-hee (actress Kim Sun-ah) and Beom-sang (actor Lee Dong-gun) were hiding in a secret auction booth and they immediately pursue Kim Sang’s men as they run away with the bihaedangjib but they lose them in the chase. But Beom-sang identifies Lee Yong-gu as one of the robbers and he finds Kim Sang’s secret hideout...

Cho-hee (actress Kim Sun-ah) pays a visit to Beom-sang (actor Lee Dong-gun) at the hospital and when she learns that he fractured his hand because of her, she offers to give him a ride home. Feeling sorry for causing his injury, Cho-hee cooks kimchi stew for Beom-sang and feeds him since his broken hand is in a cast. But then the doorbell rings at Beom-sang’s home and Beom-sang and Cho-hee start to panic. Beom-sang looks at the closed circuit video and sees Shi-wan (actor Lee Joo-hyun) and Joo-hyun (actress Kim Jung-hwa) at his door.

While the investigation team is busy preparing the ceremony for the donation of the bihaedangjib to the administration, they hear from Sang-ho that Senator Lee decided to keep the bihaedangjib in his private collection by stating that he bought it legally. When Cho-hee hears this, she tells the senator that he cannot keep a national treasure in his private collection. She leans on Detective Roh’s shoulder and cries.

Cho-hee witnesses Beom-sang talking with Chairman Jang at the museum and she later goes to Beom-sang’s home to ask him why he was with him. After having a big argument with Cho-hee, Beom-sang returns home and finds it ransacked. The sowonhwagaecheob that he fully restored is missing.

When Chairman Jang (actor Kim Yong-gun) finds out that Beom-sang (actor Lee Dong-gun) lost the sowonhwagaecheob, he uses his influence to have Beom-sang (actor Lee Dong-gun) pulled out as the host of his popular antique art show and has his college where he teaches ban him from teaching. When Beom-sang hears that Chairman Jang is so furious about the loss of the restored art piece that he even plans to hurt Cho-hee (actress Kim Sun-ah), he goes to see the chairman and warns him that he will make him pay if he has his men lay their hands on her. Meanwhile, Shi-wan (actor Lee Joo-hyun) becomes suspicious of Beom-sang when he hears a rumor that the sowonhwagaecheob was restored by a leading art restorer.

When Cho-hee hears from Beom-sang that her dad, Hur Tae-soo is alive, she tries to search for him. Meanwhile, Shi-wan learns that Beom-sang has been banned from teaching at his college because of Chairman Jang. Episode 11 When stolen art pieces are returned to the museum one by one, Shi-wan becomes suspicious of Beom-sang. Cho-hee tells Shi-wan that Beom-sang is not their man. She believes that the actual “Hong Kil-dong” figure is her father, Hur Tae-soo. Meanwhile, Chairman Jang (actor Kim Yong-gun) plans to give a maejukmoon bottle to Iwazaki as a gift but it gets stolen...

While the special police unit and agents of the Cultural Heritage Administration of Korea are busy with their manhunt to capture Chairman Jang, Hong Kil-dong breaks into Gong Yong-chul’s home and steals a standing gilt-bronze bodhisattva statue and flees the scene. When Beom-sang visits Gong Yong-chul’s home to meet him, he spots the masked Hong Kil-dong and pursues him...

While talking with Detective Roh over the phone, Cho-hee learns about the death of her father, Tae-soo. She immediately runs out of the building upon hearing the news. Shi-wan gives Gyun the last belongings of Tae-soo and Cho-hee bursts out in tears when she witnesses this. Meanwhile, Chairman Jang hears from his secretary that Cho-hee is the daughter of Hur Tae-soo...

The director of the Cultural Heritage Administration of Korea, the museum curator, and the head of security monitor a training exercise from the control center when a power outage suddenly hits the entire museum. Meanwhile, Shi-wan asks Beom-sang to appraise the cultural pieces that Hong Kil-dong returned to the museum... Episode 15 After receiving a call from Chairman Jang, Cho-hee immediately goes to meet him and hear what he knows about her father’s death.

She then goes to see Mr. Hwang to ask him about the relationship between her father and Detective Roh...

Hearing news about Beom-sang, Cho-hee runs out of the office. Meanwhile, Shi-wan, Detectives Cho and Park face off Kim Sang and his gang at an abandoned warehouse.

Cho-hee drops by the hospital to see Detective Roh and asks him about his involvement in an incident that was linked to her father, Hur Tae-soo.

After arresting Chairman Jang, Shi-wan also tells him that he’ll be tried for the murder of Hur Tae-soo but Jang denies the murder charges and demands that the detective show him evidence that he did it. Meanwhile, Cho-hee tells Beom-sang that she’d like him to join her on a trip to someplace...