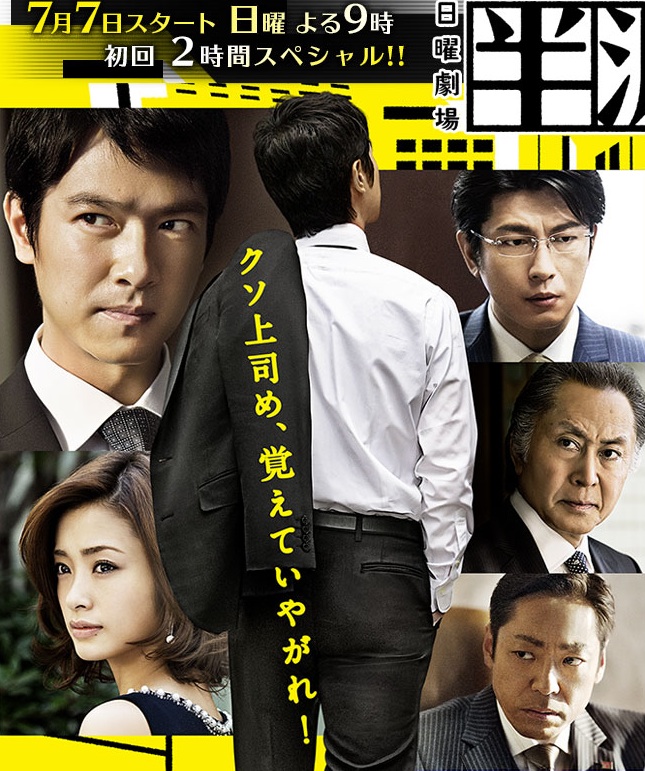 The bank's branch manager is Asano. He is an ambitious man and tries to shift the blame to Naoki. Naoki then attends an inquiry about the loan failure at the bank's headquarters in Tokyo. Naoki denies fault and promises to retrieve the 500 million yen loan. He did this because it's the only way for Naoki to survive as a banker.

nani Aug 03 2020 2:34 pm @JDramafan you may already knew but they already airing S2 now and the ratings are hella high

JDramafan Mar 06 2019 10:05 am Bottom Line: Possibly the most finely written, acted, directed, and paced JDrama I have ever seen. 6 years later and this still stands true.

In Depth *SPOILER ALERT*: This drama is well nigh perfect. All you need to know about the story is that it's a banker's quest for justice. The true beauty of this drama is the writing, performances, and above all the pacing. The pacing is literately perfect. The momentum builds from scene to scene, episode to episode right up until it's wrenching finale. There is a legitimate reason why this drama's finale has one of the highest recorded viewerships of all time.

Which is why it hurts so much that there is still no season 2 and never will be. Masato Sakai has already stated that he will not do a second season. The was some talk of Abe Hiroshi somehow starring in a second season, but nothing ever materialized form that news which is probably for the best. I wouldn't rule out the possibility entirely though. Look at HERO; 10 later we got Season 2 which ended up being (in my opinion) even better than Season 1, and I don't think anyone would have anticipated a 2nd season as a possibility. That being said at least we have a perfect 1 of Hanzawa Naoki.

But, can someone explain to me why we can get like, 5 remakes of GTO and L-DK every year, but they couldn;t make HN Season 2 happen? Seriously Japan, get you act together.

Lala Jul 10 2018 8:51 am One of the most brilliantly written drama I've watched to date (and I've watched quite a lot already). Mind-boggling. Not only the actors are really good but also the battle of intellect is outstanding, both for the protagonist and antagonists. 11/10 definitely recommended!!

Nonette Nov 26 2017 7:13 am This is really a great dorama. Never fails to amaze me for its outstanding story and super plot.

Kaede Aug 11 2017 1:39 pm There should be a season 2, must be a season 2 perhaps at least an SP to clarify the ending or else it would be a huge dissapointment.

HindS5 Dec 15 2016 4:47 am what a great drama!! I LOVE IT <3 Great actors they did a very wonderful job. I really love those actors ( Masato Sakai, Mitsuhiro Oikawa,Ainosuke Kataoka,Aya Ueto,Kenichi Takito,Kanji Ishimaru) they give a Great performance ,,,, Ainosuke Kataoka is my favorite his way of talking and everything is awesome... <3 <3

Hotelier Nov 19 2016 7:54 am Now I just finished watch Hanzawa Naoki. From episode 1-9 I really hooked up with it. Love the story, love the acting...love the pace. However, episode 10, ending part is kinda disappoint me. With all the struggle and effort Hanzawa give to the bank, that is what he received? Never mind, i think episode 1-9 is brilliant...so it makes overall still worth to watch.

Hotelier Nov 13 2016 10:47 pm I'm watching this drama now, Masato Sakai is superb in his acting here. And other characters are also well cast and giving their good performance too. Thumbs up Hanzawa Naoki!

Mirtika Apr 15 2016 9:43 pm Terrific, suspenseful drama full of twists. Some hammy acting from Owada and Kurosaki. But the ending annoyed the hell out of me. HATED THE EFFING ENDING.

Jason Feb 21 2015 7:29 am probably i think there will be no such "SP" for him as from what i got from the Japanese intros, the drama is to reflect the real and lively conditions in banking world of Japan and just sometimes giving Naoki massive lucks to carry the story on, but i realized that the toudori(頭取：bank president) is really a cunning person, maybe its just a trick for us to keep us repeating and watching the drama XD

Jasmine Jan 20 2015 12:40 am Sakai-san is really something! He's just brilliant! Bank and its labyrinth?? Never in my list of TV drama but it changed and This is the very 1st time I did really enjoyed watching such as genre. All the actors also has perfect skill in this drama.... It's wow! Wow! Wow! Like this yooooo! Konichiwa from Indonesia... It's good that I have Waku Waku Japan TV.....

70m0r31 Jan 06 2015 5:55 pm Intense throughout the whole drama. This drama is worth watching, especially to individuals that would like to see what the banking sector is like within Japan.

Masato Sakai plays the role well with his fast speeches and attitude towards his superiors. Ueto Aya does well with the support role, as a wife of a banker. From each episode, start to end, the pace of the drama leaves you with no room to stop. 10/10.

Danny Sep 21 2014 11:08 am Best Series I'd seen for years, ANYWHERE! Great Story, great acting, great suspense, great pacing and thriller. Always eagerly anticipating the next minute of the show, episode by episode. Amazing cliffhanger in the ending. Better be a sequel, there just have to be. Not only the best Japanese series I'd seen in a while, but any series in Asia and even in America. exceptional.

SachiHana Mar 02 2014 11:16 pm Masato Sakai's performance was brilliant, the last episode though had me seeing him as Komikado (which is his best role to date). The story and the pacing of this drama had me at the edge of my seat. The ratings and the praise this series got didn't happen by accident. Great Drama and a Great performance by Komikado sensei!!!

Greta Feb 28 2014 1:25 pm It appears that Hanzawa Naoki-san is gonna be the troubleshooter for the main bank's chairman and is tasked to weed out all the corrupt emplyees from the branches. When the last episode finished I was dismayed...my main thought was 'surely this isn't the end'? there's go to be more...what happens next?

Hopefully there'll be a Sp this year and a second season to answer everyones burning questions. I'm a big fan of Masato Sakai and I hope to see him in more dramas. I still have Legal High 2 to watch so I better get busy lol

miki@_@ Jan 28 2014 4:30 am Hopefully the chairman is really a good person and sending Naoki to Tokyo Securities can let him see/correct the other aspect of artificial money inflation. ... maybe by then, it will coincide well with the collapse in the real world... Loans is a primary cause of bank failure but securities will be the biggest wolf of all the financial tools that is like a final stage cancerous growth that is channelling the world's resources in the way that is strangling the delicate balance of life on earth.

CheerfulSoul Sep 25 2013 10:05 pm This drama is really impressive whether in the perfect screenwriting or the amazing acting skills. Well deserved high ratings.

FromTokyo-Japan-Veronica Sep 23 2013 9:11 am This drama reached to 54% ratings... wow....The best drama I'd ever seen!! I love the story as well as the characters. And I'm going to read the book!! I'm very glad I live in Tokyo!! I can watch every amazing dramas here!

Cherry Jul 29 2013 12:52 pm I love to watch Hanzawa Naoki drama very much. The actors Masato-san, Mitsuhiro-san, Yuto-san and Teruyuki-san; their acting is great and the story is wonderful. The overall rate I give 98%.

tangent Jun 13 2013 10:10 am Strange that we have people rating a show that is a month away from it's actual release. Perhaps some of the ladies don't like the way their men look at Aya-chan... ;)