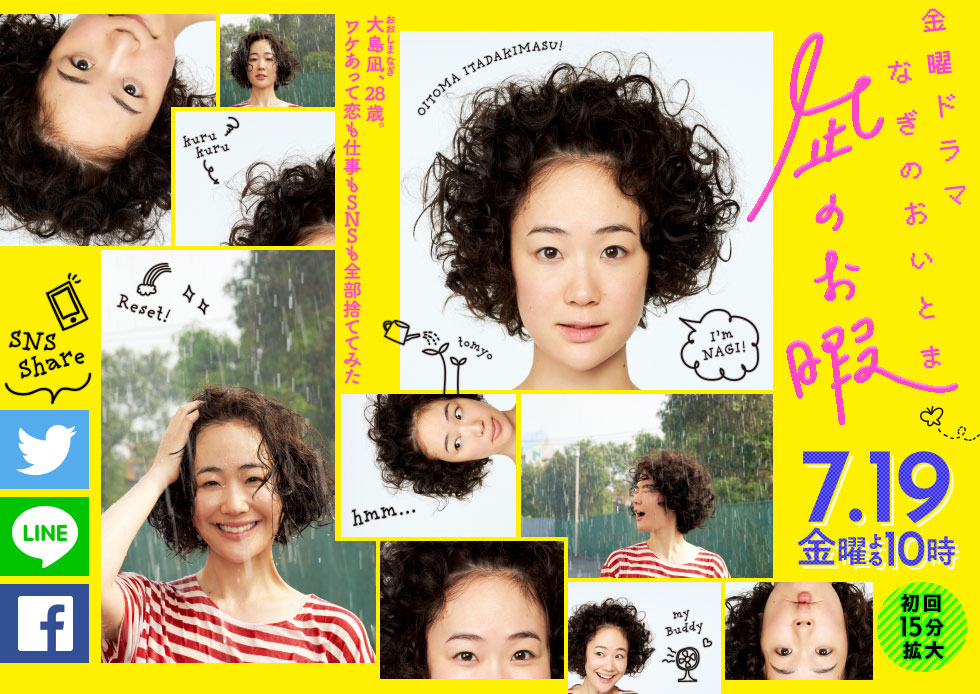 Nagi Oshima (Haru Kuroki) is a single, 28-year-old woman and she works for an electrical product manufacturer. She has extremely curly hair. She spends about an hour a day to make her straight. Nagi Oshima always tries to smile and considers other people's feelings.

But, one day, her boyfriend Shinji Gamon says something to her. This makes Nagi Oshima look back at her life. She decides to reset her life. Nagi Oshima quits her job, cuts off everybody she knows (including her boyfriend), quits social media and cancels her cellphone. To restart her life, she moves to an old apartment in the suburbs of Tokyo. She wants to have a pleasant and free life, not caring about other people. She also decides to leave her hair curly. Her new life begins, with her ex-boyfriend Shinji Gamon following her and new people in her life.

Day Mar 22 2020 3:27 am Need season 2, I believe Nagi and Shinji can get back together since they both change and will have a better healthier relationship. I ship them TT

Amaya Jan 20 2020 11:01 am Loved this gem of a show. The actors played their parts so well and characters I hated in the end I rooted for them loved Shinji' growth. I appreciated the ending it was her vacation of growth and embracing her curls yesss. I felt it for Gon but he learned and I loved that

Jpoper Jan 12 2020 10:08 am I just finished watching this and it was sumkinda unsatisfying. I thought I will be empowered or somewhat but the story flows like she "just shared" what happened to her vacation. Hahahaha.

I just felt kinda lacking on the character development like the drama ended abruptly. I am not dissapointed but it should've been more.

There were no major twist, no major event and the story went downhill. But I like the development for the exBF. I really really REALLY hated him at the start and I hoped that he got serve what he deserve and that's what happened but atleast he's a better person now.

kuri Jan 05 2020 6:44 am I love this drama so much. All the characters are so well written (and performed!) and I could related to every single one of them and their struggles! My favourite is definitely Sakamoto-san. I didn’t want to root for Shinji but I couldn’t help myself... Issey Takahashi is too good!!!!!

TTcatlover Sep 23 2019 9:52 pm Agreed. It was a little anticlimactic. I wish we saw more of Midori-san and more of Urara-chan and more of her and Sakamoto!

Elektra Sanders Sep 23 2019 12:27 pm Perfect! I'm really glad that it ended how it ended. All the characters changed so much throughout the series so that I came to love almost all of them, even the ones that I hated in the beginning. And I'm so glad Nagi didn't give in to stupid feelings and made the right decisions. I'm gonna miss it!

TTcatlover Sep 22 2019 7:31 pm I want the ending to be her and Sakamoto starting another laundry mat. Go team Sakamoto!

Honestly, both options kind of suck. I've been with a playboy like Gon-san and I've been in her shoes before. It really sucks balls. They will cheat on you eventually. They're better off as friends.

Shinji is better, but he is quick to judge and criticize her. He is apologizing. At least he is willing to acknowledge his faults and she is actually standing up for herself and hesitant, as of episode 9.

I really think the strength of the series for me hasn't been the romance. It's the slice of life elements and Sakamoto. I love Sakamoto!

I agree. She doesn't need any man right now. She just disentangled from her mom.

sokka Sep 19 2019 3:45 am lmao nagi stop hurting yourself with the boiss, just step up your game with sakamoto instead XD

Jo Sep 08 2019 9:43 pm Oh please oh please, don't end up with the ex and don't end up with Gon either!! I think Nagi needs to be free of both and spend quality time healing herself! I love this series though and I can't wait till the next episode!!

Mira Aug 16 2019 10:12 am Issei & Haru are really great actors. I watch it every week because I can’t imagine what will happen every episode. The writers are unbelievably talented and the cast are great. Cute, funny, realistic scenes which are enjoyable to watch. There are times I get so involved & hate one of the characters but suddenly realized it’s just tv series. That’s how great actors & actresses in this show. I hope this show continues & gives the viewers more exciting episodes. Ganbare!!!

Ulan Aug 10 2019 4:42 pm I guess this is the best summer dorama this year. I think many of us can relate to this dorama story plot so much. I love nagi-chan character so much

Lili Jul 30 2019 5:20 am I love this drama so much! My favorite of all time ? Cute, fresh and inspiring I hope Nagi will end up with the nice tatooed neighbour.. Her ex-boyfriend is so annoying, I can't stand him

Max Jul 19 2019 10:33 pm I watched a few minutes of the beginning, but I quit when Oshima's boyfriend appeared again in front of her....He's very boring and unpleasant guy.