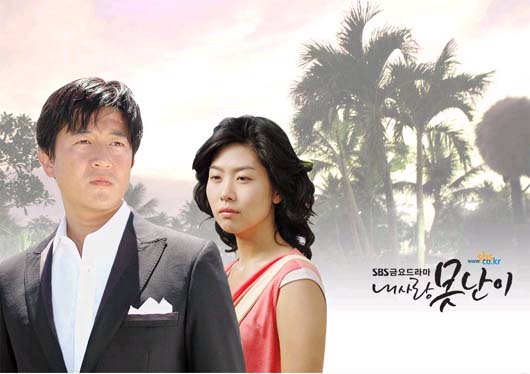 Jin Cha-yeon (Kim Ji-young) is a headstrong, simple minded but tough woman who grew up in an orphanage, and once she becomes determined to do something, she’ll do it no matter what. She was born with an innate innocence that shines through in her warm smile that’ll melt the iciest of hearts, and her beautifully clear eyes which make it difficult for anyone to lie to her.

She meets a man whom she falls in love with, through the introduction of Lee Ho-tae (Kim Yoo-seok), a childhood friend who grew up with her at the orphanage. She gives her body and soul to the man and even becomes pregnant by him, but in the end, the man leaves her telling her that he’ll come back someday - but he never does.

Her only son Du-ri becomes afflicted with a rare disease, the name of which she finds hard to pronounce. He cannot go a day without his medication and it’ll take an astronomic amount of money in order to cure him. In order to keep her son strong in the face of his tribulations, she talks to him coldly and sometimes even laments about her situation in front of him.

But he is her only family in the world, and she will do anything she can to cure him. But things begin looking up for Cha-yeon. She is offered the chance in a lifetime! It’s an opportunity beyond her wildest imagination - a contract marriage to the son of a billionaire!

Jessica Jap Feb 28 2013 11:12 pm i couldnt agree more. this is a great movie ! first time i saw this is chapter 9 when jin cha-yeon was expelled from the house, and i couldnt turn off the tv haha... and keep watched it. In Jakarta, Indonesia, The TV stations that broadcast it is Banten TV. today is the last episodes !

i love Park San Min so muuuccchhh ....... !!! he is handsome and i very like when he show his charming smile... hahaha

Debbie Jul 29 2011 9:17 am I wished that it had a different ending...!!! So sad to know that Jin Ja Hyeon prefer Lee Ho Tae as her next husband.... I can't take it when I saw tears in Shin Dong Ju face... I love this drama from the very begining but I wish that it had a different ending... When I saw this drama I was so sure that man and woman can be bestfriend, but finally it's not like what I was thinking about... ahhh Shin Dong Ju I like you so much!!! When you asked her to marry you according to a contract and she said she didn't want to, I feel so sad! I almost turn off my tv. At that time I told to my friends, if she didn't want you, you may choose me... :)) I like you very much Park Sang Min, I love your style, I like your expression, Love your smile... you are my kind of man... Love you Park Sang Min! <3