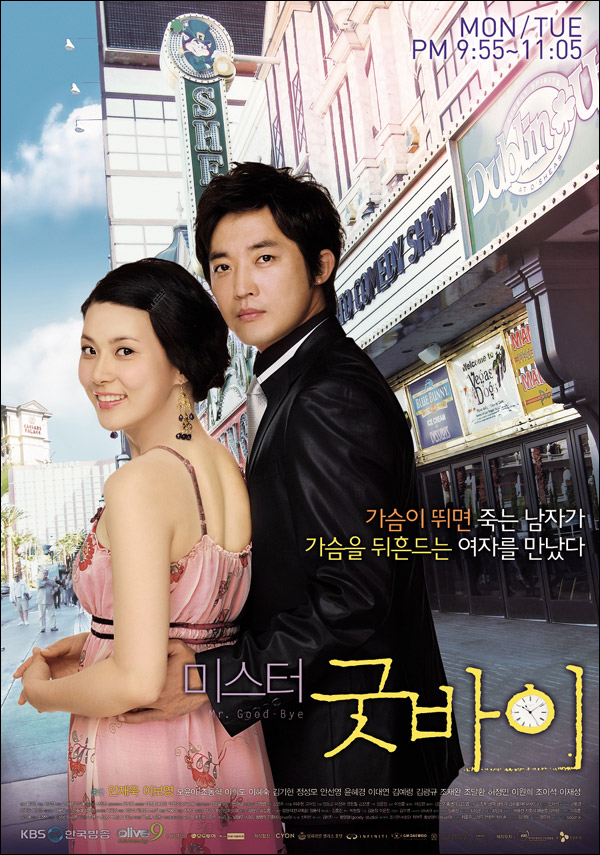 “Mr. Good-Bye” is a story about the last love of a dying man, Hyeon-seo, who had to live in loneliness after losing his both foster parents but eventually succeeded as a hotelier. He finally finds happiness when he returns to Korea, where he learns that he has a son from a woman who loves him, and finally meets his biological mother. The series also sarcastically portrays good and evil of the human world with a hotel as the background. The series also depicts how hotel concierges help hotel customers heal their spiritual wounds. The upbeat and outgoing Young-in, one of the concierges teaches Hyeon-seo the meaning of love and fights for his love with Su-jin, a doctor. After his biological parents abandoned him, Hyeon-seo was adopted to the United States but had to live in loneliness after losing his both foster parents. With much effort, he turns into a successful hotelier and one day returns to Seoul, where he meets Young-in. The two begin their topsy-turvy relationship in Las Vegas and eventually fall in love with each other. However, their happiness doesn’t last long as Hyeon-seo learns that he will die soon due to complications from a heart surgery he underwent five years ago. He finally tastes happiness when he receives love from two women, Young-in and Su-jin, and learns that he has a son. Outgoing and undaunted, Young-in wins a marathon to win a trip to Las Vegas with her boyfriend, but one day witnesses her boyfriend making love to her best friend. She ends up leaving for Las Vegas alone, where she meets ...

editha Apr 01 2015 10:54 am I truely like the drama..cool actors and actress but the end i want to suggest that the guy will not die so can you have part 2 story....i wish he would be alive and live happily ever after,.tanx

it's not working lol

love everything about it. even the very realistic ending. or somewhat realistic anyway. (slight spoiler: don't know why / how all of a sudden she's there to take her away)

but damn i wish the ending was different.