Mother is a Whore 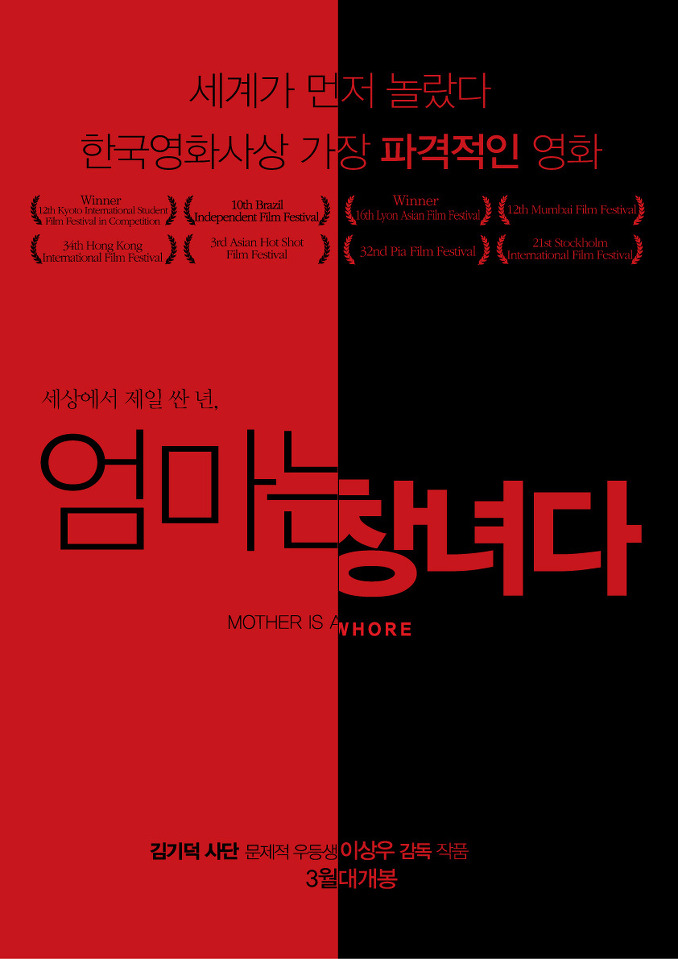 Sang-Woo (Lee Sang-Woo) is a HIV positive 38-year-old man who lives in a small shed with his mother (Lee Yong-Nyeo). His mother at the age of 60 began working as a prostitute to support herself and her son out of their small shed. Meanwhile, Sang-Woo works as her pimp - collecting payment and arranging appointments with his cellphone. Their clients include a paraplegic man and soldiers on holiday.

Living through their difficult situation, Sang-Woo still carries a strong bond with his mother. Sang-Woo also harbors intense anger within. His father (Kwon Bum-Taek) abandoned them and then remarried into a seemingly normal family. But actually, his father married a woman (Kim Ji-Hee) who is a religious fanatic and their son (Jung Tae-Won) always locks himself away in his room. Sang-Woo often meets their daughter (his step-sister) for drinks outside of a Buddhist temple. Can Sang-Woo ever find a way out for himself and his mother?

Ki Apr 26 2011 6:59 am Came out of the screening for "Mother is a Whore" feeling exhausted - like being dragged through the mud and into a bottomless pit and back. In retrospect, I do feel better for it and glad I had the opportunity to watch the film. The movie with the shocking title of "Mother is a Whore" packs a lot of dynamics into characters that are mostly twisted, but not without rhyme or reasons. As shocking as the main premise of the film is - a son pimping out his mother, the movie is able to convey a strong story within this tragic situation. Main character, played by the movie director Lee Sang-Woo himself, harbors a lot of anger within which gets ultimately aimed at his father and the steps to get there are seriously disturbing, but compelling. The father, who eventually remarried into a family that could have been scripted by Sion Sono (religious zealot mom, recluse son, disillusioned daughter, and father with a sinister darkside) brings out another level complexity in the disturbing world of "Mother is a Whore". The movie is shocking, disturbing, dark, bleak, but created by someone with large amounts of storytelling talent and packed together in a powerful 90 minutes of cinematic drama. Fans of early Kim Ki-Duk films and darker Sion Sono films should especially appreciate "Mother is a Whore". I can't say I ever want to watch the film again, but I am glad to have watched the film and can't wait to see more works from Lee Sang-Woo.

P.S. - why the heck hasn't "Mother is a Whore" played in any Korean film festivals?