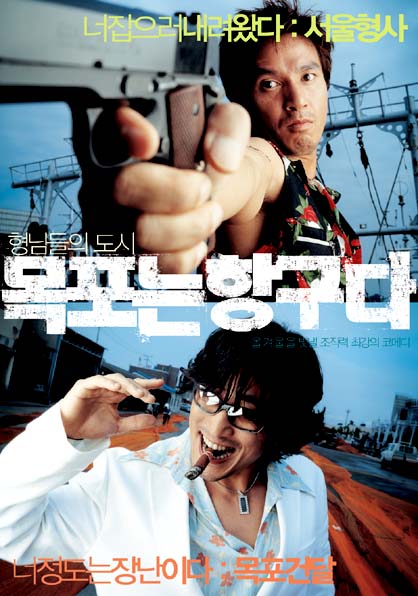 Detective Lee Su-Cheol (Cho Jae-Hyun) is ‘Mr. Kindness’ at the civil petitions office. His reasoning abilities are better than of Sherlock Holmes, but his field abilities are worse than a blind man so he always gets the desk job. But this time, he goes on an undercover mission to Mokpo to prove himself as a homicide detective.

Su-Cheol passes himself off as a local gangster under the name ‘Nam Ki-Nam’ to infiltrate into the Sung-Ki Family, a criminal ring connected to a huge drug deal. But there are just too many people in his way; a female district attorney Lim Ja-Kyeong (Song Seon-Mi), the captain of the homicide department, and the Stingray Family seeking revenge on the Sung-Ki Family.

While training to be a member of the ring, he sees the silver lining in a dark cloud. He gets picked as a boxer representing the Sung-ki Family. He knocks out the opponent and becomes the Cinderella of the Family.

Su-Cheol runs into a problem. Sung-ki sees him contacting DA Ja-kyeong Lim. Caught off guard, Su-Cheol tells him that she is his sister. But then, Sung-Ki falls in love with Ja-Kyung on first sight, while Ja-Kyung has a crush on Su-Cheol.

A conspiracy against Sung-Ki surfaces, but he doesn’t see it coming. Doo-Ho, the second-man-in-rank of the Family plots betrayal because he wants to start the drug business which is against Sung-Ki’s will. Sung-Ki is severely attacked betrayed by the one he trusted the most.

Undercover in the ring, Su-Cheol sees the humane sides of Sung-Ki and decides to reveal his true identity to prove Sung-Ki’s innocence.

Su-Cheol finds real friendship and loyalty in Mokpo where drugs, conspiracies, and betrayals prevail. Will he be able to accomplish his mission and be reborn as a true homicide detective?