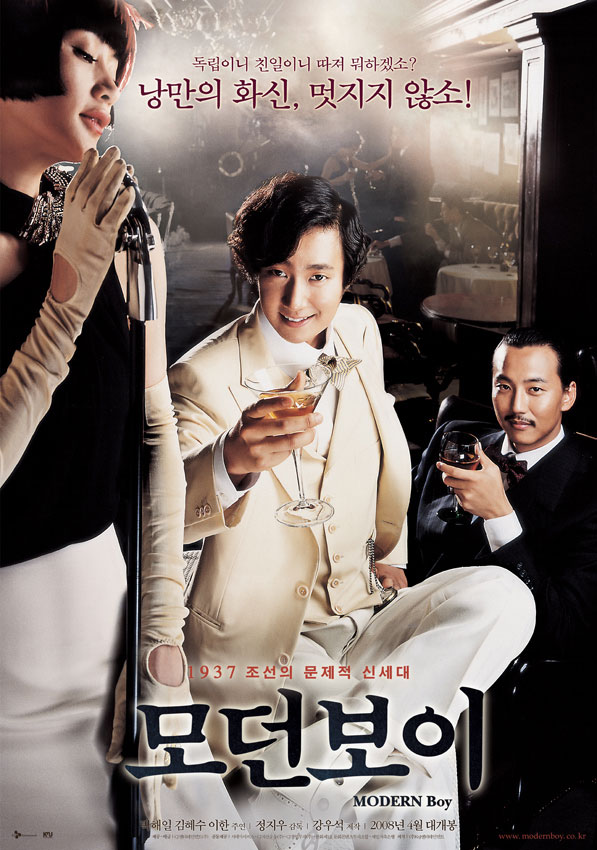 Set against the backdrop of the Japanese occupation of Korea in 1937, Modern Boy tells the story of Lee Hae-Myeong (Park Hae-Il), a government general who falls in love at first sight with the mysterious Jo Nan-Shil (Kim Hye-Soo) after watching her dance at a speakeasy cabaret with best friend Shunsuke (Kim Nam-Gil). Through sheer persistence, Hae-Myeong finally begins a passionate romance with Nan-Shil, but their union doesn't last for long when a package she hands him explodes inside a government building and disappears without a trace after stealing all of the valuables from Hae-Myeong's house. Still infatuated with the mysterious femme fatale, Hae-Myeong discovers the numerous identities she has lived under as well as the long list of suitors she has had in her life. Knowing that the further he pursues Nan-Shil, the deeper he will go into the rabbit hole, Hae-Myeong pushes on to find out what her true identity is. 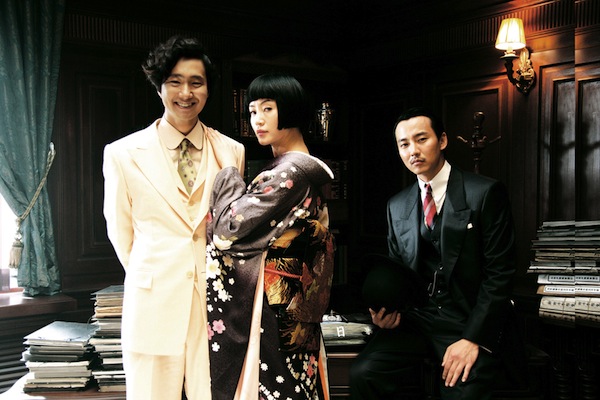 Ki Jan 14 2009 2:47 pm Not sure exactly what runs through the heads of Korean production companies, but their habit of marketing all of their films in a fun “romantic-comedy” package is a head scratcher. “Modern Boy” is another such film, released with glossy fliers and a trailer that hints at a period romance film filled with swing music. Well, after watching the movie, I can say there’s a romance angle as well moments filled with lively swing music, but the heart of the film lies somewhere else. If comparison can be made to any recent films it would lie with Ang Lee’s “Lust, Caution” sans the lust (My apologies to Hye-su Kim fans who hoped otherwise).

modernboy-m1“Modern Boy” is also yet another 2008 South Korean film set during Japan’s colonial rule over Korea - following such films as “Radio Days,” “Once Upon A Time“, “Dachimawa Lee,” & “The Good, The Bad, The Weird.” The film stars Hae-il Park as Hae-myeong Lee, a carefree playboy who works as a civil servant for the Japanese government in South Korea. Hae-myeong could care less about the politics of his day. His only concerns lies with seeking out the latest in fashionable suits and chasing young woman. Hae-myeong’s world undergoes a seismic shift when he meets the mysterious jazz singer named “Laura” (Hye-su Kim). Hae-myeong discovers that Laura’s real name is Nan-shil and she has a lot more secrets that Hae-myeong is about to discover.

After the couple becomes involved intimately, Hae-myeong hears a bomb explode in the civil office in which he works at. When he peers into the destroyed office, he observes detectives pull out the bento box that Nan-shil gave to Hae-myeong as the cause of the explosion. When he rushes back to their apartment to confront Nan-shil he discovers that Nan-shil has disappeared. Hae-myeong’s love for Nan-shil then pushes him to conduct his own search for this mysterious lady and, perhaps, regain the loving relationship that they once had.

The film’s director Ji Woo Chung, best known for his 1999 film “Happy End” starring Min-sik Choi & Do-yeon Jeon, has created a film that holds your interests, but a few questionable stylistic choices and lapses in logic holds the film back from taking your breath away. Stylistically, the film features well done CG effects to create a visually engaging Gyeongseong era Seoul. Such landmarks as the Namdaemun Gate and the train station in the opening sequence were created by computers. While the special effects were something to look, the film constantly employed shaky camera shots that, at its worse, felt nauseating. Furthermore, close-ups of Hye-su Kim always featured a ghastly amount of airbrushed tackiness.

The story itself, a combination of “Once Upon A Time” meets “Lust Caution”, lacks originality but does became more intriguing as the story progresses. The “Mata Hari” angle works well, while the film also tactfully covers past South Korean - Japanese relations without resorting to cheap nationalistic tricks (anyone remember D-War?). When the story kicks into high gear, as stated earlier, lapses in logic seems to hold the film back from firing on all cylinders. As an example, the rickshaw filled with explosives thrown into the path of an oncoming Japanese army truck worked well to free Hae-Myeong, but how did the rescuers know the explosives would knock out all the Japanese soldiers and leave Hae-Myeong conscious? The same question applies when Hae-myeong is handcuffed to a metal pipe during the climatic scene.

If you’re after a compelling period piece involving spies, freedom fighters, romance and what not, “Modern Boy” is a film that certainly can satisfy. Hye-su Kim and Hae-il Park turn in respectable performances, though as a couple they are noticeably short on chemistry. If you can get through the shaky camera shots & the lapses in logic during critical junctures of the film, then you’ll find yourself enjoying an otherwise A-OK film.