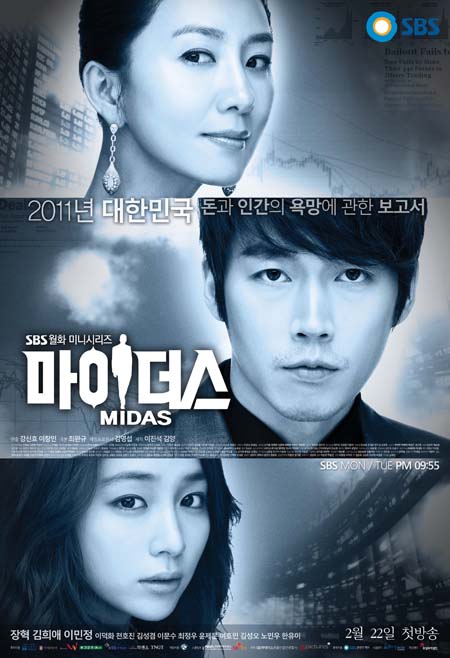 "Midas" takes place against the backdrop of corporate M & A (mergers and acquisitions).

Kim Do-Hyun (Jang Hyuk) graduated from the top university in South Korea and has now worked as a fund manager for 3 years. He is handsome and good at sports. Do-Hyun is particularly keen with analyzing the situation as it occurs, but his weakness comes from his poor family background. After working 3 years as a fund manager Do-Hyun is all too aware the power money has. Insecure with his situation, Do-Hyun decides to look for a more prestigious job, with better pay.

Yoo In-Hye's (Kim Hee-Ae) is a president for a hedge fund company. Her grandfather was a banker during the Japanese occupation of South Korea. This means her grandfather was on the side of the Japnese. During the Korea War he made lots of money. After the war her grandfather became a money lender and through this made a fortune. By the 1970's he became the most powerful man in the underground economy. Yoo In-Hye's family is now one of the richest families.

Lee Jung-Yeon (Lee Min-Jung) dated Do-Hyun for 6 years and they will get married soon. Whenever she thinks about Do-Hyun, she can't stop smiling. During her middle and high school years Jung-Yeon was a quiet student with ordinary scores, but Do-Hyun appeared in front of her and they began a relationship. She is certain that Do-Hyun loves her. Jung-Yeon also has one thing that Do-Hyun does not have. That is a family.

sgt_doom Nov 30 2022 7:32 pm Creepy Whisper Woman, Yu In–Hye (who never speaks above a whisper), can be annoying, but a good portrayal of the evil female hedge fund ececutive psycho so prevalent today! Knew she was Pure Evil when she quoted Warren Buffet.

Always like the professional artisan acting of Jang Hyuk!!!

My Name Oct 21 2019 5:25 am I usually watch Korean drama more than Western movies. This Midas is one of my best, everyone plays their parts so nicely it is amazing. I love it.

Charlie Apr 24 2019 2:50 pm I had high hopes for this drama. It started good and developed into a cool revenge drama. But by the end all the revenge and financial backstabbing is made moot, all the struggle was for nothing and the woman who ultimately was responsible for his corruption and fall is actually rewarded at the end. The writers lost track at the end of the drama. What could be a masterpiece became just meh.

Arnab Nov 28 2018 5:06 am Jang hyuk acting is mindblowing.This drama is one of the masterpiece.

AsianDramaPearls Dec 10 2015 1:51 pm Good drama. Enjoyed the actors. Great acting by Jang Hyuk as usual. As Aj commented below, It was a bit tedious, but I found the corporate finance angle interesting--I finished all the episodes. Although I was really annoyed throughout the series with the lead actress' (Kim Hee-Ae's) whispering voice--so irritating! I know she was supposed to be "cool and composed" but it was too overdone. My only other comment is that I think they should have developed No Min-Woo's character much further. I felt that this weakness was a significant detraction overall. I kept expecting at least a little more connection and involvement with Lee Min-Jung (or anyone else for that matter, even his own family). It felt like something was missing, never developed and never brought to closure, even with the ending. I agree with the current AsianWiki rating of 92.

Aj Sep 24 2014 7:24 pm I love Jang Hyuk, but I guess it's the corporate angle I found tedious and frustrating, for the danger to his character was there from day 1, thus making so much of this predictable.

Jojhemie Jul 07 2014 5:06 pm Holy Crap! No Min-Woo actually responded here... Pretty cool if it's real whether it's his manager or team doing it...that's pretty darn cool. It's cool to see down/ to earth stars

labuan_malaysia Sep 23 2013 8:18 pm What I really want to see in each story is karma. Kim Do Hyun & Choi got locked-up but In Hye and her family get free? Eventhough using illegal money for the rest of their live.

Gorjuz gorjuz Feb 12 2013 9:33 pm Lee Min Jung is so beautiful! Jang Hyuk is so handsome! They are great together. Though I find the story a little boring, may be because I am not into the business world, but I totally loved the cast! This drama made me an official Lee Min Jung fan!

Dave Oct 24 2012 7:40 am Midas has got to be one of the best series I've ever seen and I'm only half way through the episodes. Excellent acting, excellent writing, excellent cinematography, beautiful music, and a very very emotional story. Not only depicts Korea's high finance corporate world in such a provoking way, but a beautiful love story is woven into the fabric which tugs at the heartstrings. I'm a guy and I was tearful at times. Such strong emotion runs through this entire movie. And, from the first episode, I fell in love with Lee Min-Jung (Lee Jung Yun) the beautiful and lovely girlfriend of Kim Do Hyun (Jang Huk). Can there actually be a prettier girl on this planet? The Korean film industry is far above Hollywood these days and without all of the vulgarity and perversity that Hollywood routinely puts out.

bri Oct 09 2012 2:45 am badboy is actually really really good.If you can get past the first couple of episodes it definitely pays off.Im excited for this drama as well

Kyysa Jul 19 2012 2:34 pm WOW! Was I really so much enthused over business drama? I really did! :-) One of the best series I had ever watched. The acting of Jang Hyuk and Kim Hee-Ae was absolutely superb. Thanks for this drama, I really enjoyed this.

iloveGD May 25 2012 2:53 am I've started to watch this because of Lee Min Jung. But later I've discovered Jang Hyuk - now he is my number one favorite actor. His playing is really daebak - you start to fall for him no matter what. And the series are interesting, have deep idea and plot rarely becomes boring. Highly recommend to watch it.

Cici Apr 02 2012 8:55 am This drama was great from start to finish. All the actors and actresses were really good especially No Min- Woo. He was mesmerizing to watch. His acting and his captivating looks stole the show. He is also a very talented singer. I hope he sings in more dramas and has many lead parts. My favorite scene was when he sang the song he wrote. I love his voice...and his style. Kudos to Choi Wan-Kyu for not bailing out at the end like so many writers seem to do. This drama was exciting till the end.

Gasenadi Feb 21 2012 9:04 pm Boy, oh, boy. As the lead's career takes off, his principles unravel. And hurray for the GF! She's not having it at all, stands her ground and breaks with him. What a gal! And how about that confrontation btwn the protestors and the new corporate mogul, in which HJ betrays his once beloved "father-in-law". How low can you go to rise to the top? Slow, at times, but I would recommend.

Ana Aug 15 2011 1:46 am looking forward for more No Min Woo!!! every role he gets is very different and i enjoy watching him being so many different characters!!

zhia_aala Apr 16 2011 1:37 am I have watch MIDAS until episode 3.....can feel JANG HYUK aura in this drama.....its not a mistake for the producer to choose JANG HYUK...he's always at his best.. No Min-woo need to sharpen more on his acting skill, he's good, hope he get better challenge character in the future, and also that guy who played Kim Don-chul, not bad also. Jang Hyuk, I wish you'll get another award for MIDAS!!!! Jiayok! Jiayok!

Mary_lovedbskforver Apr 12 2011 1:12 am can anyone tell me, all name from Kim Do Hyun's friends, who help him for his business(when he was under Yun In Hye) there is a guys I really want to know his name, but i can't find out, help me plzzz

nominwoo Apr 04 2011 3:58 pm Thank You all for your utmost support. english not very good but thank you and taengoo i hope we meet someday. its fate for all my fans

rcoor Mar 08 2011 7:22 am oh oh oh secretary kim (from secret garden) looks so evil here! i'm really looking forward to that :D want to see his range of acting :D i have a feeling i won't be disappointed!!!

Leila Feb 22 2011 3:25 am So proud of to be JANG HYUK fan! You can just feel his PASSION for his work. I feel blessed to have actually met him in person. Hope we will meet again somewhere in the world. All my BEST to Hyuk and his family always. KEEP UP THE GREAT WORK JANG HYUK!!!

jhfan Feb 06 2011 12:42 pm I'm really looking forward to this! I love Jang Hyuk! He was supposed to be in Secret Garden but he dropped out :'(...Anyway, hopefully this will be just as good. He's a great actor and he's paired with a good actress, fingers crossed >.<