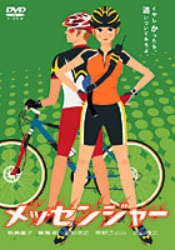 Naomi Shimizu (Naoko Iijima) is a 29 year old career woman in charge of PR for the venerable Italian fashion house, 'Enrico Dandolo'. Under the umbrella of its trading partner (major Japanese trading company) 'Ataka Trading', Naomi's boyfriend, Hiroshi Okano (Tetsuya Bessho), is able to provide her with the enviable luxury lifestyle to which she is accustomed.

That is, until one day Enrico Dandolo unexpectedly declares bankruptcy. Okano flies abroad to deal with the crisis leaving Naomi at the mercy of his colleague, Ota (Shigemitsu Ogi). Ota repossesses her apartment, clothes, credit cards, cell phone, everything she has to credit the company balance sheet.

Naomi flees her apartment with her one remaining asset, the red Alpha Romeo. However she carelessly collides with bicycle messenger Yokota (Hiroyuki Yabe). Yokota is severely hurt. He pleads with Naomi for her to fill in for him until he recovers at the delivery company 'Tokyo Express' he started with his college friend, Suzuki (Tsuyoshi Kusanagi). Under pressure from supervising traffic cop, Shimano (Yuzo Kayama) Naomi reluctantly agrees to this settlement. Accustomed to a life of luxury, the work of a bicycle messenger proves harder than Naomi's wildest imaginings. She finds herself soaked by the rain, exhausted by the many hills, chased by angry truck drivers only to receive not a word of thanks from the clients. This is compounded by Suzuki failing to have a single kind word for her. She is on the point of giving up the whole thing.

She goes to see Yokota in hospital with the intention of quitting only to overhear Yokota arguing with his long-suffering girlfriend Yumiko (Kotomi Kyono) who is fed up with his dedication to the instability of Tokyo Express. Yumiko returns the cell phone Yokota gave her and declares that she's going to quit Tokyo and return to her home town.

The next day Naomi is asked by Yokota to stop Yumiko leaving. She chases Yumiko's bus and hands the cell phone back to her. Seeing Yumiko's eyes fill with tears as Yokota calls to ask her not to go, Naomi has a change of heart. Filled with new-found inspiration, she takes Suzuki to see her former nemesis Ota at Ataka Trading in the hope of pitching Tokyo Express as their courier. When Ota refuses their request with the words "Even if you are cheaper than the motorbikes, you'll never be as fast, so forget it..." Naomi has the idea of challenging to a race, two motorbike couriers who happen to be in the office, Hosokawa (Shinsuke Kyo) and Hattori (Shinsuke Aoki). Thanks to Suzuki's efforts, Tokyo Express wins and secures a contract with the trading company.

Augmented by Yumiko, the newly-retired policeman Shimano and Hattori, fired from his job on the motorbikes, Tokyo Express turns a new page. At this point, having secured the contract to franchise the massively popular 'Tim Grey' fashion line, Naomi's former boyfriend, Okano returns in triumph from New York and offers her the position of head of PR. However Naomi is confused by the wealth of emotion she feels towards both her new job and her colleague, Suzuki. When Suzuki fails to ask her not to go, she feels slighted and returns to her old world.

Meanwhile, Hosokawa succeeds in playing a dirty trick to force a re-match for the Ataka Trading account between his team of motorbikes and Tokyo Express. Crippled by the loss of Naomi, the Tokyo Express team have no choice but to head into the competition at great disadvantage. How on earth can they win?

Steve Aug 03 2013 1:04 pm Hi, I live in New York City and just now found out about this movie. I lived in Japan in the late 1960's and I was married to the most wonderful Japanese woman for 44 years. (Tomoko passed away 3 years ago) I love everything bicycles and want to buy a DVD of the movie Messenger, but it is out of print. If you have a copy, In Japanese or English, any region, please let me know how much and I will buy it. Thank You, Steve