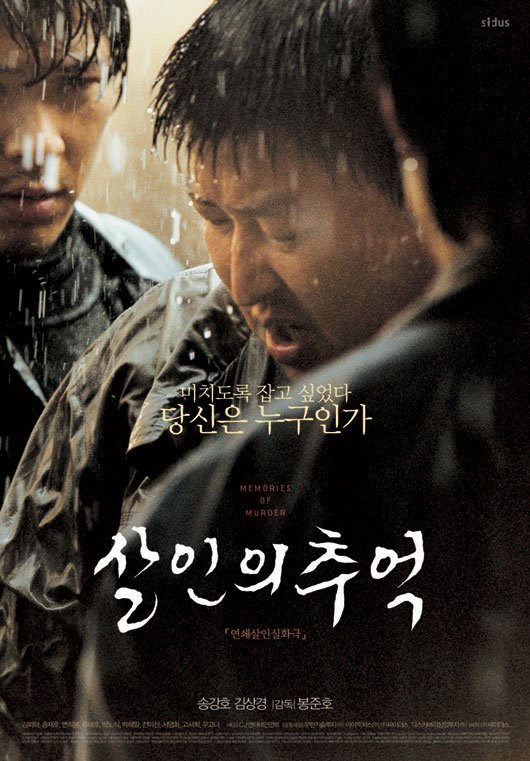 1986 Gyunggi Province. The body of a young woman is found brutally raped and murdered. Two months later, a series of rapes and murders commences under similar circumstances. And in a country that had never known such crimes, the dark whispers about a serial murderer grow louder.

A special task force is set up in the area, with two local detectives Park Doo-Man (Song Kang-Ho) and Jo Young-Goo (Kim Roe-Ha) joined by a detective from Seoul who requested to be assigned to the case, Seo Tae-Yoon (Kim Sang-Kyung). Park personifies the policeman who goes with his instincts and his fists, bloodily challenging every small-time crook in the area to confess. In contrast, Seo pores over evidentiary documents related to the case and inevitably the clash of styles leads to tense rivalry.

From the fact that not a single hair is ever found at the scene, Park takes off to search the area's temples and public baths for people with follicular disease, while Seo finds a pattern in the evidence of women wearing red on a rainy day as the victim's profile. On a rainy day, the detectives set up a trap in order to forestall another murder. The next day however, yet another woman is found murdered - with an umbrella speared through her pubis. The solution to the murders grows fainter and drives the detectives to ever greater despair.

john Dec 23 2020 6:36 pm The real culprit is should be park hyun gyu aka lee choen jae , they from discharge military work in metal workshop, second the real case lee choen jae his blood different with semen in victim cloth same with movie, he had photo climbing tree same with the last victim killed he climb tree watching doo man wife walking and target middle school that tae yoon ask about story in school

Lucy Nov 17 2019 5:27 pm The families & friends of the victims not having the closure they needed to be able to fully lay their loved ones to rest was finally given to them in 2019. All thanks to the police officers who never let the case stay cold even though it was deemed so. The likeness of the composite drawing taken from the bus driver who was a possible witness, was so chillingly accurate a picture of the man who confessed t the murders. Even though the statute of limitations had run out for these murders, the man responsible will answer to God for his deeds.

nestlepurelife Dec 04 2016 7:16 am This is an easy one. This movie is special. Just watch it. It's artsy & edgy but at the same time still enjoyable. This movie shows the qualities of Korean film industry and film educations. After this movie, I have no more doubts about Korean universities' acting & theater majors. They are one of the best in Asia.

Mariam Mussawi Sep 06 2016 4:42 pm Well, I've never imagined that one day I'll come to choose a movie to call it my favorite, but I was glad that "memories of murder" was the one to me. And if you ask me why, I'll just say that I've watched it 3 months ago and i still think about it everyday since then. And I am proud to say that I am haunted by Memories of Murder, in a good way.

Mohit bhardwaj Jun 17 2014 3:42 am I was looking for a thriller-suspense movie and googled the same. Found this movie,downloaded it. Saw it and WOW. A MASTERPIECE !!! I have already seen this movie 15 times in the last 2 months. AWESOME. The best Serial Killer Movie. The only bad thing is its based on a real story.

Ali & Ali May 29 2014 4:09 pm The violence investigator was amazing , but knowing that the story was based on true events was awful and sadly touching

blueberry Mar 07 2014 9:12 am Excellent movie,but sad part is that the movie is based on true events.

me Sep 11 2013 8:35 pm Very good movie! One thought keeps nagging me...towards the end, when they were again questioning the eye witness with the burnt face and they showed him the suspect's photo, the guy says something like - it was hot, he burnt my face etc. The detectives dismiss this and command him to talk to the point. But what if he was actually referring to the murderer? That the person's face he saw murdering the girl is also the same person who burnt his (the witness's) face. Can't this be possible? I was holding my breath and hoping the movie would follow that line of thought but seeing that only a few minutes of the movie were left, I realized it was going to be an unsolved murder. Sad. And even sadder that it was based on true events. Well, I hope the monster who did these crimes is caught one day. And again, very well made, well acted and directed movie.