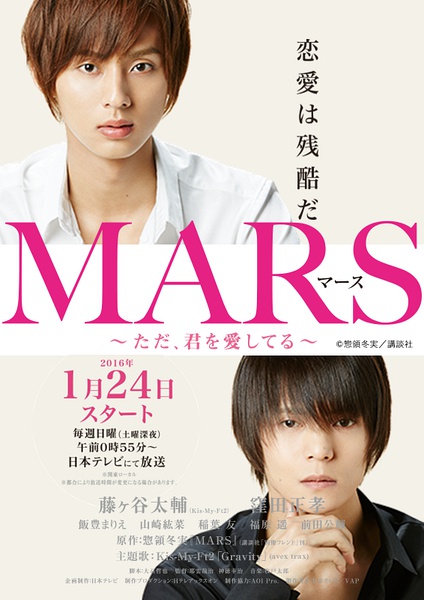 Kira Aso (Marie Iitoyo) is a high school student with an introverted personality. When she was a child, her father died in a car accident caused by a motorcycle gang. Now, she sketches the sea everyday during her spring break. One day, Rei Kashino (Taisuke Fujigaya) rides his motorcycle and sees Kira Aso sketching the sea. He sits next to her. Kira isn't used to talking to guys and isn't friendly to Rei Kashino.

The new semester begins. Kira Aso meets Rei Kashino as her classmate. Rei Kashino doesn't get interested in particular style of girls, but he becomes interested in Kira Aso. Harumi Sugihara (Hirona Yamazaki), who likes Rei, and Tatsuya Kida (Yu Inaba), who is Rei ’s friend, are surprised in Rei's interest for Kira.

Jane Sep 24 2018 1:08 pm Lori (11/28/17) you have to understand that MARS is based off a Japanese manga and I like the Japanese version than the Taiwanese version. They are sticking with their natural roots. :)

Lori Nov 28 2017 4:20 am I want korean adaptation for this!!!! I read the manga four years ago and become my #1 fav ever since. But the taiwanese and japanese drama did not satisfy me. I put my hope on korean adaptation jeballlllll

Rifka medinia Nov 03 2017 9:12 am same as mars in taiwan drama. but rei is not a motor racer. more cool that taiwan. very recommended for the watch. his paintings ling more cool. this seems like there is a continuation of rei killed with that crazy guy.

Papu Apr 14 2017 12:44 pm When someone wrote girl in her 19 romance a man in his 30s, I thought the movie itself depicts that story which later I came to know its not. You people need to stop thinking movies are real. same thing I saw with Tokyo Ghoul movie and Kubota as a lead, well he doesn't look old for the role. The girl maybe 19 but she doesnt look 19, the boy maybe 30 but he doesn't look 30, both look like they are the same age so its not weird. P.S Ages are not written on your forehead so you maybe 19 and may look like 30 or you maybe 30 and look like 19, that's how actors are casted for their roles.

Does my name really matter here??? Oct 20 2016 8:47 am To those who were looking for the music if its not Gravity by kis-my-ft2 try Friends by Rebecca

Stefhannie Aug 10 2016 10:31 am I thought its a different story, I only realize 'twas a Japanese version of (Taiwanese) Mars

A Jun 08 2016 12:25 pm To the person that said that they changed Masao's name but the Japanese name is Makio, the English manga changed his name to Masao but his name is actually Makio

Beatrice Jun 06 2016 2:33 pm This version really has potential but I still prefer the Taiwanese version since that one was really really good. I hope there's more to this. :)

Mistiq May 23 2016 1:16 pm I really prefere the tawainese version. I find they go so fast on the episodes, it 's sad, the story is really beautiful.

rei kira forever Feb 21 2016 1:24 am i am a hardcore fan of Mars manga but i didn't watch the Taiwanese version because i didn't really adore the lead actress (no offence). So all these times i was hoping that either Korean or Japan entertainment industries would make their own adaptation of this manga. Surprisingly Japan did!! And i've watched two episodes by now and i'm reallyyyyyyyyyyyyy satisfied!!! The lead actor fits Rei but if his hair is longer it would be perfect! And the lead actress is super kawai! I love how cinematic this drama is because i really couldn't enjoy a drama if the production is quite sloppy. I'm anticipating the other episodes as well. Can't wait!

To those who haven't read the manga, i recommend you to read it because there's a lot of things in the manga that wasn't even in the drama. There are sweet moments between Kira and Rei too.

i didn't get it why they changed Masao's name? Do Japan has an issue with the name or what? And i didn't like it that they brought Masao too early in this drama. On top of that, he's being wayyyy too friendly and caring with Kira. In the manga, Masao supposed to show himself after Rei and Kira started dating. And Masao wasn't that friendly and caring with Kira. He wasn't even in the same class as them. Please someone explain this to me or maybe Makio is not Masao? Is he a new character they made up to create a love triangle maybe? And i'm glad they didn't really center the story on Rei's passion with bikes and his bikes gang because it was too boring when i read it in the manga LOL

I'M NOT SATISFIED WITH THE EPISODES DURATION!!! One episode should be longer than 20 minutes!!! This drama is toooo good to be that short!

Tem Feb 20 2016 4:36 pm I just happened to come across this drama without knowing the manga or story line but I enjoyed watching it, very entertaining and the cast is lovely it's a drama that I do want to see what's going to happen next so they certainly have me hooked, I think they've good job and I hope this show gets more love from viewers and continues to surprise me.

Kimberly Jan 20 2016 9:15 am I cant wait to see what they do with this. I loved the Taiwanese version with Vic Chou and Barbie Hsu. I've seen that version at least 6 times.

jdoramaloverAgain Jan 15 2016 7:43 am forgot to mention Yagami spell backward Imagay lol he doesnt get the gay role. luv him anyway

Summer Dec 27 2015 2:12 pm Kubota Masataka is playing a gay character again?!? When is he going to get his own romance drama or movie and star as the main guy who gets the girl?!? He deserves roles with higher profiles than this nonsense.