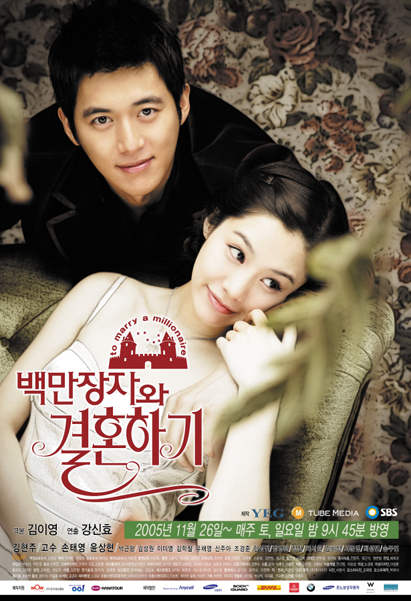 Eun-young helps her step sister in various dealings, also helps quell her step mother’s angry mind. She cannot stand injustice and always says what is on her mind. However she’s also very shy. She gets tense when someone whom she secretly admired and looked up to during college turned into a broadcast PD. One day, a very absurd thing happens to her. She was apparently “a millionaire’s first love’ and she gets a proposal to be cast on a TV show called “Marrying a Millionaire” She refuses in the beginning as she cannot believe what is happening to her. However, because of her step sister’s scheme, she eventually leaves for France. However, the Millionaire that she meets was her middle school schoolmate, Kim Young-hun, known for being notoriously dumb in her class. She once liked Young-hun, however, as he fails in his first test and he’s placed last in class, she loses interest in him. However, as time passes, she begins to change her mind. The program continues and she starts to like him. However, she is disappointed with the fact that the whole thing is for prize money. Then when Yu Jin-ha approaches her, she begins to…

Becoming Kdrama Addict Nov 10 2015 11:50 am Started watching this because of Ko Soo in Empire of Gold. Literally speechless. In EoG he had this ruthless killer persona, and here he is a fluff cuddleball you want to wrap up in blankets and save him from all the badness in this world. Phenomenal actor really.