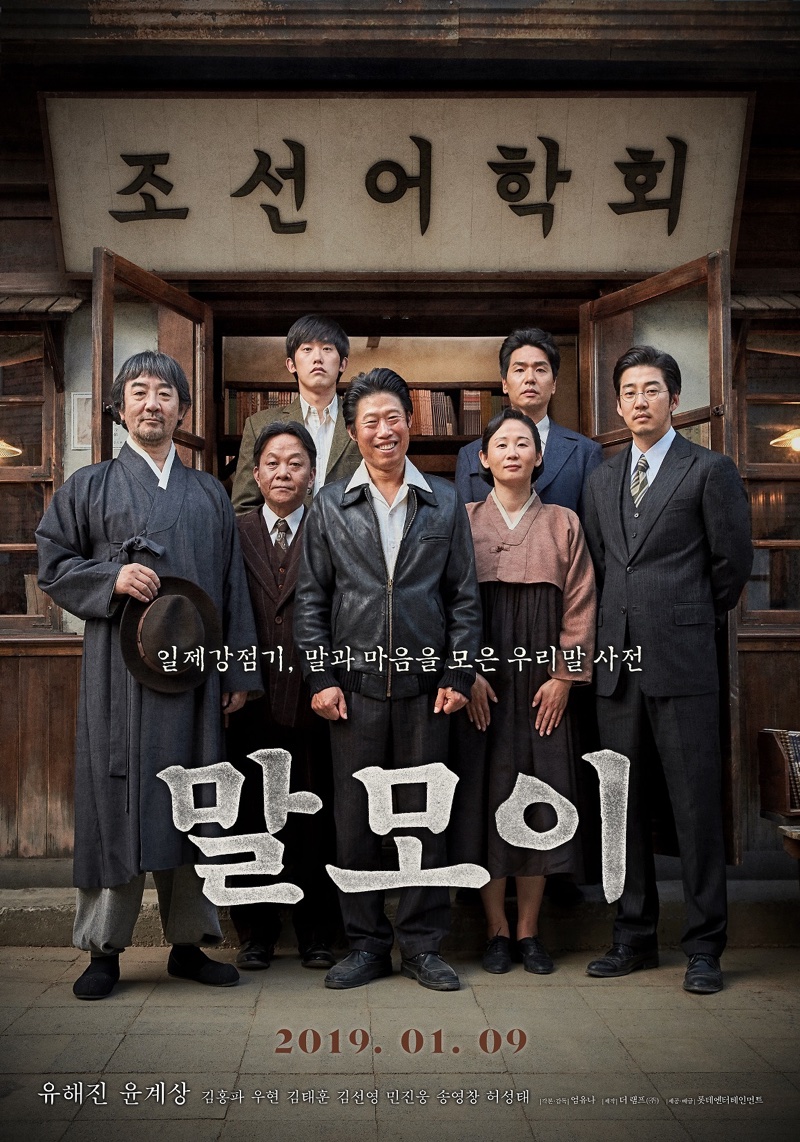 Set in the 1940's when Korea was under Japanese occupation. Korean people were banned from speaking their own language during that time.

Pan-Soo (Yu Hae-Jin) has been imprisoned several times and it is nothing special for him to go there. He does not know how to read or write the Korean language. One day, he steals Jung-Hwan’s (Yoon Kye-Sang) bag to help pay for his son's tuition fee. Jung-Hwan is the son of a wealthy Korean family who are pro-Japanese. Yet, Jung-Hwan is a representative of the Korean Language Society. By meeting Jung-Hwan, Pan-Soo's life soon changes. They work together to publish a Korean language dictionary.

Destry Jan 27 2021 12:04 am This is a quality film with great performances by talented, seasoned performers. The low rating is probably due to the fact that some are upset or embarrassed that Japan did these things and can't handle seeing a film about what Japan did.

Rather than rate the film with a low score, people should "man up" and accept history so it doesn't get repeated. Scoring this film low is like giving a low score to Twelve Years a Slave because one can't face the facts.

Awaa Dec 08 2020 6:18 pm Crazy, i just watch from the middle to the end and i cried so much. I've been in korean drama enthu for 6 years and this is my first comment ㅋㅋㅋㅋ

lin Mar 25 2020 3:14 am This movie is so good. wonder why it's underrated. because the stars are not big enough? whatever, recommended!

JJ Jan 28 2020 7:34 pm this is a must-see movie of Yoon Kye sang, even if i'm not from SK, i feel so proud of how the leader of this group played by Yoon as Mr Ryu worked so diligently just so they can preserve the Korean dictionary! I dunno why ppl here did not rate this as much as they should have, shame on them! This movie depicted the struggles of these Koreans who risked their lives for their own country's language! I cldn't believe how they suffered during the Japanese occupation! W.out spoiling others who haven't seen this, there were some scenes w/c can make you cry! Kudos to Yoon kye sang for his great performance here & quite wondered why Yoon as well as his co-star Yu hae jin didn't win awards for their roles plus the production itself was pretty amazing! 2 thumbs up waaay up! I can't help but be teary eyed watching this move! I'm also glad for this very simple way that their language hangeul which i am learning right now is very easy to read and write! I'm happy to rate this 80%!!!

Jinjoo Jan 28 2020 6:11 pm this is amazing movie how they filmed it to make it look like in the early days, with the streetcar and all that plus the costumes! Yoon kye sang brought me to see this movie, after seeing him in chocolate drama, i miss him already :) love this actor! he's so versatile! sarang hae yo Yoon kye sang! i also wondered why the rating of ppl here was too low, pls you can do better than that instead of 29%, they deserved to be complimented for the production alone! Don't be stingy :(

sleepy Feb 26 2019 5:44 pm Great storyline with superb acting. Please watch this. It's really well made. It's an honest accurate depiction of what happened during Japanese occupation of Korea and I really appreciate the director for bringing this to light. You develop a greater appreciation for the the opportunity to learn certain languages after this. Thank you to those people who devoted their lives to preserve Korean. I'm not sure why the reviews are so low on here but this movie did really well in Korea.

jan Jan 14 2019 12:00 am I cried so much.... thanks to the passionate and dedicated people of the past who, even when faced with the worst odds, still pushed through, the korean language still exists. Had it's funny moments and a lot of scenes that had my heart racing out of the suspenseand fear. Great movie! Please watch :-)