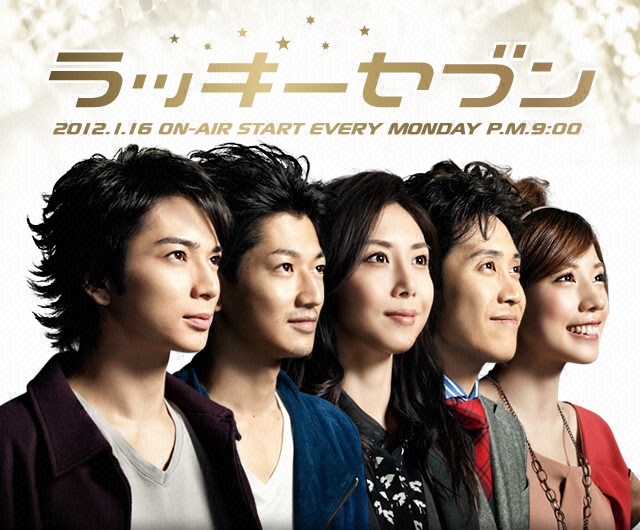 "Lucky Seven" depicts the story of 7 detectives who work together at a private eye firm in Kitashinagawa, Tokyo. The seven detectives do not get along and argue frequently, but they pull together to when its time to solve a case.

Shuntaro Tokita (Jun Matsumoto) is a playboy, more interested in chasing women than having a job. At a hotel, where Shuntaro and a woman are having an affair, Teru (Eita), Junpei (Yo Oizumi) and Asuka (Riisa Naka) from the private investigation firm "Lucky" awaits to take their picture.

After hours of waiting, Shuntaro and the woman walk down the stairs of the hotel lobby and walk in different directions to avoid attention. Private Investigator Teru intentionally bumps into the woman in the parking lot. The woman drops her scarf. Teru picks up the scarf and goes back to the hotel where Shuntaro is waiting in front of the elevator. Teru hands that scarf to Shuntaro, telling him that the woman who dropped the scarf was with him. Shuntaro thanks Teru and runs to the parking lot. When Shuntaro hands over the scarf to the woman, they embrace and Private Investigator Junpei takes a picture of them.

Later, Shuntaro calls the woman while walking down the street. The woman tells him that their picture was taken at the hotel and her husband knows about their affair. She tells him that they can't see each other anymore. While talking with the woman, Shuntaro notices Teru, the man who handed the scarf to him, inside of a watch store. Shuntaro realizes that Teru most likely set him up.

FromPHwithlove Nov 05 2017 11:31 pm Nice drama! I love my baby MatsuJun and Eita tandem here! From the funny Mine in Nodame Cantabile, Eita became super hot! And I got a bit sad when he wasn't in almost half of the whole series. I'm going to start watching his dramas.

Lala Jul 04 2016 10:10 am I watched this after I finished 99.9 Keiji Senmon Bengoshi, the cases in this drama were not as intriguing as in 99.9 I think, but the actions (especially the fighting choreo) I love them all! The ending was quite satisfying for me, it ties all the loose ends. If you're watching this because of MatsuJun and because you're a detective/procedural drama otaku (like me ;D), I advise you to watch this drama first then watch99.9 Keiji Senmon Bengoshi.

d Jan 12 2014 5:39 pm Such a brilliantly funny drama! Nice change from all the fluffy Cinderella type love dramas from Korea. Mastujun is such a great and charismatic actor. His on screen chemistry with Eita is just genius lol. Love the SP episode especially. Hope they will have a season 2.

barahachi Sep 23 2013 12:29 am so inlove when they defy gravity with their fighting scenes. kakkoii yo!

Emina Aug 11 2012 12:36 am I just realized that Matsujun and Eita acted together in Kimi wa Pet. So good to see them again in another awesome dorama.