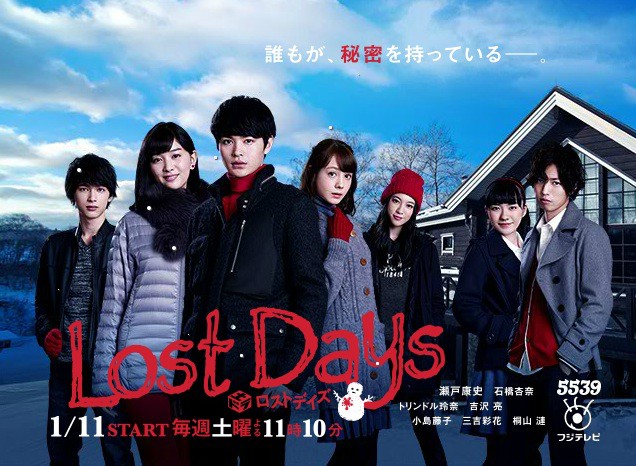 A group of 7 university students, that belong to the same tennis club, leave for a graduation trip to a snowy mountain cottage during the wintertime. Although all of them seems to get along well, some of them carry secrets the others are not aware of. Yuta Shino (Koji Seto), the cool and brilliant president of the club, is in love with Miki (Anna Ishibashi ) and plans to tell her about his feelings at the destination of their excursion. But it doesn´t works out the way Yuta wishes, instead he learns that Miki is already dating his best friend, the free-spirited Takano Natsu (Ryo Yoshizawa). When love is shattered and jealousy unleashed, the seven friends find themselves in conflicting postions, and suddenly a murder occurs.

Mika Mar 28 2015 1:26 pm I love this drama. The cast was great n i especially like ren kiriyama as wataru sakurada. he really do a great job with his character. the others was great too. the only things i hate is the ending. i don't know why but somehow it looks hanging. but overall its worth to watch.

yumi Jul 04 2014 12:03 am This was a very disappointing ending to a great drama. It was a great drama because it shows the hidden feelings friends may have against each other and how keeping them inside is only going to build up and explode. But that ending is absolutely ridiculous. I know it's just a drama for entertainment but that drove me nuts [SPOILER] how Rika ended up being the killer and they left Satsuki there for like a day and a half without calling the police or their parents or Satsuki's parents. Gahhhhh...

Ann May 11 2014 10:05 pm I think a lot of people got the end of this drama wrong. I don't think they did leave her there and go back to Seoul. The subs that I saw had Seto Koji say that when "Rinka comes back," they would all return to that place. That means that Rinka was going somewhere the others weren't. I think they were driving to the police at the end so Rinka could turn herself in.

Dianne Apr 16 2014 10:19 am Great drama about the deep feelings and secrets in this group of (I thought they were graduating from high school not from a university)... Anyway... I really liked the plot -- the writers did a great job of providing a script for the actors to be believable. I was still left with questions, though... When they learned of the death of their friend, why in the world didn't they call the police and report it?!? They just left her out in the cold for two days then went back to Seoul without reporting it to the police to at least move her body to the morgue???? That last scene was scary, though... Who was the person hitching a ride? Did he have blood on his glove? Was it the guy who had been killing girls the whole time they were having "Lost Days"??? Hmmm... Thanks for the memories of "Lost Days" ...