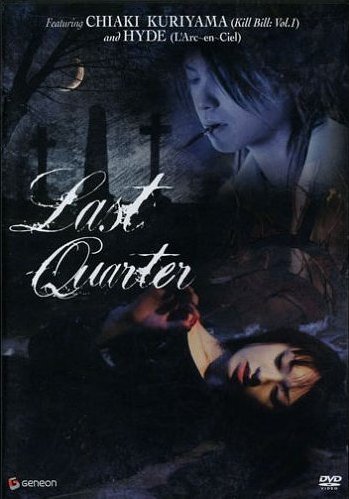 On the night of her 19th birthday, Mizuki (Chiaki Kuriyama) is celebrating in style at a club with her boyfriend Tomoki (Hiroki Narimiya). Their blissful scene is ruined by a friend who reveals that she has been sleeping with the habitually promiscuous Tomoki, which shocks Mizuki profoundly. After the suicide of her mother and her difficulty adjusting to her father's remarriage, he was the only person in the world that she felt she could rely on. Utterly dejected, she flees into the night and stumbles upon a dilapidated estate bathed in the ethereal glow of the moon in its last quarter. Drifting on the still air is a strangely familiar melody being played on a guitar, emanating from somewhere inside the mansion. She follows the music inside to a darkened room and a mysterious young man named Adam (HYDE). He claims to have written the song especially for her even though she has never met him before. Feeling an inexplicably strong bond to this charismatic stranger, Mizuki returns home and collects her belongings in order to begin a new life with him but is involved in an accident. Suddenly she finds herself back at the gates of the mansion, unable to leave its precincts, and with no memory of what has happened or who she is.

Hotaru (Tomoka Kurokawa), an inquisitive young girl recently discharged from hospital, is searching for her runaway cat, followed by her reticent school friend Miura (Tomoki Ochiai). They enter the overgrown grounds of a deserted manor and hear piano music coming from within, enticing Hotaru to venture inside where she discovers a solitary young woman suffering from amnesia who claims to be awaiting the return of someone called Adam. When Miura enters the room, they are astounded to find that this girl can only be seen by Hotaru and is prevented by some strange force from leaving the mansion. Together they try to discover her identity and unravel the mystery surrounding her, and gradually come to the realization that it is all somehow connected to the tragic past of a family who once lived in the mansion, a rare phase of the moon that occurs only once every 19 years, and an enigmatic musician by the name of Adam...

Chiaki fan Nov 19 2011 5:15 pm I bought this from Amazon (US Import) because it starred Chiaki Kuriyama in it, want dissapointed a good watch.

mitzmin Jan 11 2010 11:19 am Oh I really liked the film. Loooooove hiroki tamaki and chiaki huriyama acted ok on the film, though Hyde... I love his songs and all but his acting skills are TERRIBLE, I mean he does't act well and all. The film is super cool and fun watching, the soundtrack is great, hiroki is beautiful. I really recommend watching