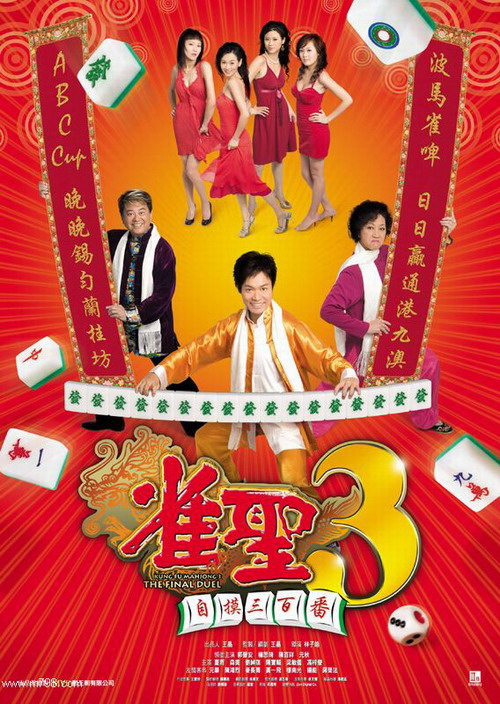 Uncle Man (Yu Ha), a magnate in the gambling industry, is well-known as "the Grandmaster of Kung Fu Mahjong". Having lost his wife in his early years, the widowed father lived with his only son Ken (Roger Kwok). Ken has mastered the art of mahjong and was nicknamed "The Half-Century Man" as he once won 50 hands of mahjong in a roll. Everybody expects Ken to succeed his father as the Grandmaster of Kung Fu Mahjong. Auntie Toni (Qiu Yuen) is the sworn sister of Ken's mother. She treats Ken as her own son.

One day, Ken holds a banquet for his father's birthday. "The Grandmaster of Kung Fu Mahjong" returns from Las Vegas. However, when he comes back, everybody is dumbfounded as he has a beautiful new partner called Sophie who has just got married with him in Las Vegas.

In fact, Sophie married Uncle Man only for his estate. She colludes with Uncle Man's enemy Bowie and conspires to seize Uncle Man's property when Uncle Man has a heart attack. But as Uncle Man gets well later, Sophie's scheme turns out to be a failure.

Sophie takes the advantage to stop Uncle Man from leaving his heritage to his son, claiming that Ken would disgrace Uncle Man's prestige. Uncle Man promises her that she would get her wish if she could beat Ken in a game of mahjong.

Unfortunately, Ken is unable to fight back. As Ken is going to lose all his father's estate, Auntie Toni manages to postpone the game for a month with the help of Uncle Man, who pretends to be fainted.

To help Ken, Uncle Man asks Ken to learn some special mahjong skills from his old friend "Grand Slam Ben", who was once renowned as "the Humble King of Mahjong". Grand Slam Ben reveals that he has taught Sophie mahjong 5 years ago, and was cheated by her of his love. Since then, he throws up and even faints whenever he sees the symbols on mahjong. This hinders him from playing mahjong again.

To avoid throwing up, Grand Slam Ben teaches Ken by using a set of special mahjong, which is carved with English characters to replace the traditional mahjong symbols. He asks Ken to clean the mahjong tiles every day, treating mahjong as his good friend. Gradually, Ken regains his confidence and makes great progress. Finally, he becomes a grandmaster in Kung Fu Mahjong.

Before the game starts, Sophie attempted to assassinate Ken but failed. Ken and Auntie Toni arrive at the venue in time. The game starts with Sophie, Bowie, Ken and Auntie Toni, but later Auntie Toni cannot carry on as Sophie added laxative in her drink. Then, Uncle Cat, another mahjong master substitutes Auntie Toni. However, Uncle Cat is bribed by Sophie, so Ken is in a disadvantaged state. Facing three enemies at the same time, Ken loses 15 rounds. At this desperate moment, Grand Slam Ben appears and encourages Ken not to give up. In the last roll, Ken wins 40 hands and even wins the last hand with 300 scores. With Sophie beaten, Uncle Man announces that he would leave his entire heritage to Ken, and would divorce Sophie, as he gets the evidence of Sophie's adultery!

After that, Ken marries Nancy and gives birth to a baby. Although his fortune does not improve, he is still content and lives happily with his wife and son.