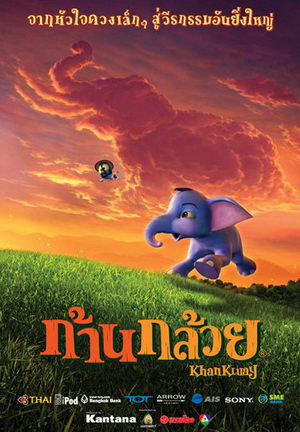 Khan Kluay is the story of a curious, naughty, young elephant growing up independently deep in a forest. His insatiable curiosity about his missing father sets him on a journey of great adventure. The many obstacles and difficulties that he encounters make him strong and the lessons he learns turn him into a brave, proud elephant full of energy yet very gentle at heart.

Khan Kluay meets many memorable characters on his journey who help him solve his various dilemmas, preparing him to be the greatest elephant of all time.

As well as these characters from the animal kingdom, Khan Kluay larns to live with humans and to understand the relationship between man and elephant - this eventually leads to self-sacrifice as he goes to war as a warrior.

Even though, initially, his ambition is to find his father, Khan Kluay eventually realizes that something else is even more meaningful and that is friendship, courage and sacrifice. He discovers that these qualities are in him, bequeated to him by father's soul and have been in him all along. That is Khan Kluay's real lesson from his journey.