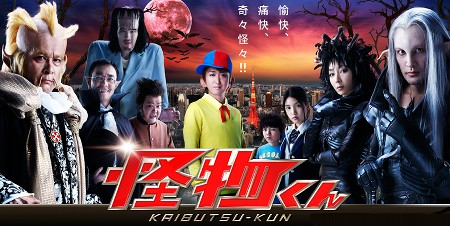 "Dad? What’s happening?” the young prince of the Kaibutsu or Monster Kingdom asks his father. But before he knows it, the king has thrust him into the human world. Prince Taro (Satoshi Ono), also known as Kaibutsu-kun must live among people for a while as part of a grooming process before taking over the kingdom. So begins the sometimes scary, sometimes touching and often very funny adventures of Kaibutsu-kun and his three affable attendants Dracula (Norito Yashima), Wolfman (Ryuhei Ueshima) and Franken (Choi Hong-Man).

The monsters meet humans Hiroshi (Tatsuomi Hamada) and his older sister Utako (Umika Kawashima), and through them, they learn about friendship, love, family and ultimately, the purpose of their mission: what it takes to be a leader. -- NTV

allzoun Jul 24 2011 8:47 am i enjoyed this dorama eventough it's kinda feels like kid's story but i found it's interesting satoshi acted really great