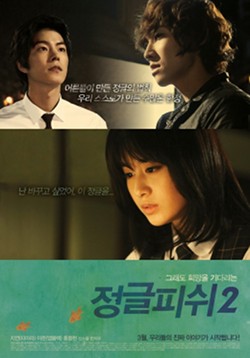 A beautiful high school student, who is the top student of her class, mysteriously dies. Six of her friends who graduated from the same elementary school attempts to track down the reasons for her death by communicating in real time. While the six friends dig for the truth behind her death, they face difficulties in their studies, dropping out of school, bullying and boyfriend troubles.

Nada Oct 06 2019 9:47 pm Hong Jong Hyun is naturally born as a model and actor as well. He is full package ? Gorgeous look and great acting?

Temi Amusa Sep 14 2014 8:03 am jungle fish is one drama i love so much. the movie point out everything that do happen in high school and I LOVE IT!

heenimalltheway Aug 22 2014 3:03 am I've heard about this drama. Is it good? I've watched White Christmas and haven't even found any better since than.. :(

Suju7 Sep 19 2012 12:44 am I couldn't stand Jiyeon's character throughout this show. She isn't bad but not good either. I do like her out of the show though. haha. All the other characters were great especially Gongzi. She was soooo cute. It is weird though she is pretty young compared to everyone but to me was one of the most experienced in acting out of most of them.

behappy Nov 05 2011 7:30 pm I watched this just for the cast basically, because I love Lee Joon. The acting was really good, but to be honest I really did not like this drama :/ it was good because it was so much more realistic to the world we live in, but I prefer the really cute so unrealistic dramas xD

lizzelquinn Jul 27 2011 2:12 pm I Luved this drama cant wait to get it on dvd this drama really made me think about my life.