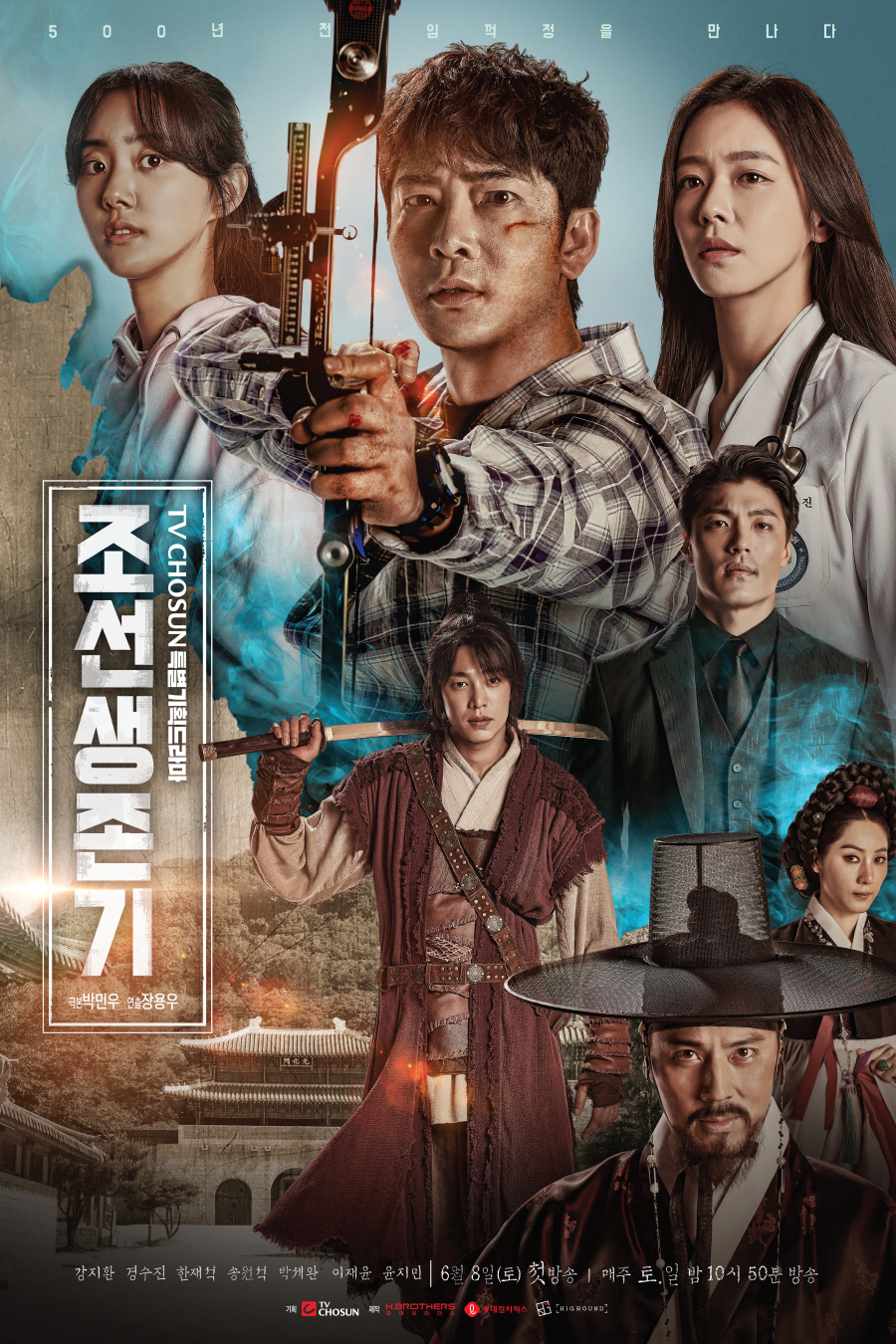 Han Jung-Rok (Kang Ji-Hwan) was the top archer on the national team, but he now works as a delivery man. He struggles to make a living. Lee Hye-Jin (Kyung Soo-Jin) is his first love, but they broke up after his downfall. She is now a resident at a rehabilitation medical department. They meet again for the first time in 7 years.

A dramatic event causes Han Jung-Rok to travel back in time to the year 1562. There, he meets historical figure Im Kkeok-Jeong (Song Won-Seok). Im Kkeok-Jeong is smart and handsome, but he works as a butcher, which is the lowest class in Joseon.

Han Jung-Rok, who struggles to make a living in the present day, and Im Kkeok-Jeong, who belongs to the lowest class in Joseon, meet and make a miracle.

Jil Jul 03 2021 4:56 am Started ep 1 today and i dont think i will continue. I just dont like lead characters with weak mindset.

And oh btw, i will not continue just because its lead have some personal issues, i just dont like lead character with too weak mindset.

Sakura Jan 06 2020 11:58 am When I saw Seo JiSeok was getting this role, I admit it is the first time I heard about this Joseon Survival and hence learnt about the previous actor's scandal.

someone Dec 02 2019 1:48 am i watch this because of kang ji hwan not because im a fan of him but its because of his acting.. despite his ongoing case. But the stop watching when they replace him with someone else.

Jammer Nov 18 2019 12:37 am so dis-appointed with the production team of this series ... they left their international audience hanging in the air ... if their actor messed the production plan ... they should atleast show some care to their international fans and audience and not this "I don't care attitude" ... where is the english subtitle from episodes 11 onwards ... don't make us think this production team is selfish and un-caring ... I'm still hoping and waiting they will consider giving us the english subtitles ...

jestine29 Aug 25 2019 4:38 am why do keep complaining of changing the actor? he is being sued for sexual abuse case and do you expect the company will continue having him considering he has a case to face???

We all know you guys changed the actor so it's stopped

Reilli Jul 30 2019 5:25 am The rating dropped a lot since 11th episode ㅠㅠ I will still support this drama cause time travel is my favorite genre. Hopefully the rating will come up again!!!!

My bad...will start watching from episode 11 and just read recaps of previous.

Praise Jul 10 2019 9:00 pm @libertie Valle I believe in ur thinking we should not blast him but pray for him . for God sake he has been in the industry for so long those girls are working for his agency.

Libertie Valle Jul 10 2019 6:36 pm I like Joseon Survival Korean drama show I really enjoyed it. I heard about on news Kang Ji Hwan rape/sexual assault allegations are still going. I don’t think he did that and it may be trap. In my opinion. That’s what I’ve wanted to say. If it’s not true so just refrain yourself from judge him before the results of the investigations. I hope everything works out for the best.

Ryu Samuël Jul 10 2019 11:12 am I'm not saying he's not guilty not the 2 girls did lie. I've said it may be a trap. That's what I've wanted to say. I'm not protecting him and I'm also not a big fan of him (I only like female actresses) but I wanted to say that it's not right to judge him right away. You all blaming me could be wrong too if it's not true so just refrain yourselves from judging him before the results of the investigations.

Siri Jul 10 2019 3:26 am Ryu Samuäl so basically you know shit about the whole situation but you already decided that the women are liars. Haven't you learned anything from the whole recent scandals in the entertainment business?

Mien Jul 09 2019 11:10 pm Ryu Sameul- It is very sad that if you think this way. In this case,victim called her friends first not the police. Maybe they are shocked and know nobody want to believe them because they are not rich and famous like Kang Ji Hwan.But. they are staff from his agency , not the people who he take from the street. Please tell me ,why would they lie about it. Their career at the risk. Is same case like Kim Saeng Min(MC Entertainement weekly -after 10 year, the victim have courage to tell about it because she know he only new staff, people not buying her story. And Saeng Min stepped down from all his show. And Park Yoo Chun victim also said similar thing . But, i will wait until investigation is over.

Lena Kim Jul 09 2019 6:24 pm We don't know the future of this drama since investigation about Kang Ji Hwan rape/sexual assault allegations are still on going, yet i don't think it's right to frame the two women as liars and i would like to add that it's not truth that fake rape accusations happens all the time (a quick google search on that subject should put that 'concern' to rest).

I think it's a pity that the production team and the other actors will probably get affected by this scandal, i hope everything works out for the best.

Ryu Samuël Jul 09 2019 3:13 pm This drama may be cancelled due to the recent scandal that happened to the main actor (Kang Ji Hwan) who were arrested and indicted to rape charges. Personnally I don't think he did that. He's a rich celebrity and it's an opportunity to get money from him by accusing him of rape. Those things happen all the time.

KDramaAdept Jul 05 2019 11:25 pm What is the title of the song that Myeongwoldong danced during Chohahyeon (festival)?

Sia May 24 2019 12:44 am The teasers aren't all that interesting but since this drama's by the same screenwriter who wrote the amazing Syndrome drama, i believe it must be good. Honestly speaking dramas with time travel element has pretty much lost its popularity especially when dramas with horror element is becoming a much popular trend now but i'll be watching this though. Please don't fail me writer-nim<3

Maninder Kaur May 16 2019 9:53 am Can i loudly say this, " This is an amazing storyline on Time Travel after ages" and Kang Ji Hwan is making comeback... Daebakk and and and Song Won Seok in a major second lead role for the first time.... Awesomeness!!! Fighting team

Eagerly waiting for this drama to air ❤❤