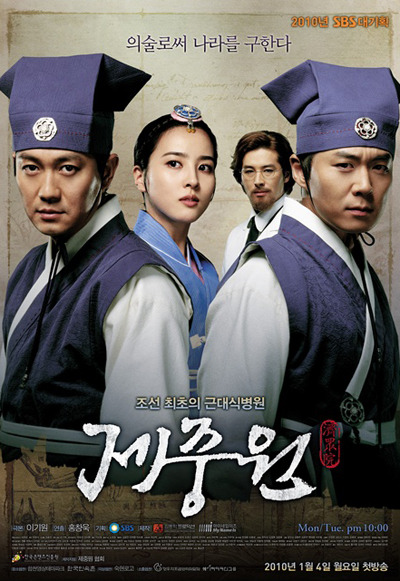 Hwang Jeong, whose father was a butcher (the lowest social position in South Korea), works his way up to become one of the premier doctors during Korea's Joseon Dynasty. He then starts working at "Jejungwon" - the first modern hospital to practice western medicine in South Korea.

AFA Oct 09 2013 7:02 pm A truly incredibe drama. Sad that they did not win any award (please correct me if I'm wrong). Anyway, I LOVE PYW sooo much in this drama and also My Love, Madame Butterfly. Though many said that he is not so good looking, personally I just love his personality in these dramas and I believe he did a great job in being Dr Huang. I just love this guy. Hope to see more of PYW in the forthcoming Korean dramas.

LAPD Jan 22 2013 4:41 pm Outstanding story, execution, direction, and casting. When I was 4 epis in, I became a little indignant that it took me a lot of "You May Also Likes" in Hulu to find it. It's now my 3d Tier I KDramas, behind A Jewel in the Palace, Road No. 1.

It is informative, historical, and with medicine as a back drop, it watches like both a National Geo piece interlocked with a lighter-on-its-feet Joseon period drama.Sure it was drama, but it was well paced, timed, and directed. So much was so unexpected - perhaps it was good that I didn't look up Jejungwon that I watched the entire series sequentially and loved it. It was like falling in love with the boy next door. LOL! Seriously after productions like RN1 and Jang Geum, Jejungwon is that you appreciate like you do with wine. Slowly but steadfastly. I've bumped in one of two leading ladies I have watched and actually enjoyed - HHJ was pretty impressive. The international cast was also a pleasant surprise. I actually really like the entire cast to include the 2d lead YJH <--- aggravating though his Dr. Baek was. Such a primadonna. LOL. PYW does an absolutely outstanding job from beginning to end.

It may be only in KDramas that when the noblesse whack off their topknots, they become these uber handsome 21st guys (it was supposed to be early 20th). PYW's transformation was beautiful. LOLOL! I think you could hear gasping when YJH did the honors to his own earlier.

You will spend some time seriously bawling your eyes out, thinking, laughing, and bawlin'. All the good things that an outstanding KDrama will make you do. :-)

Preeyada Oct 18 2012 10:12 pm I actually loves this show and loves everybody who performed in this show, especially for my Hwang Jung - Park Yong-Woo.

MILEY Mar 16 2011 4:31 am i'm hooked to it.i love the actors and the story itself.very informative...the production staffs have really made a good research on some impt. facts about medicine.love it love it.i'm so much affected by the lead actor....great characterization of little dog as a son of a butcher and mr. hwang,the medical asst.,medical student.this is my first time to watch this actor...gosh..he's so good.i wish i 'll see him more on dramas.kudos too ,to the second lead,the son of a noble man.great character actor.i haven't finished it yet and i'm interested on how their respective characters will develop.to park yong woo,i'm a fan now.

morpheus Dec 10 2010 5:09 pm I cannot find anything in English that lists the actress who plays Lilias Horton, I found Heron however. Cast

So Patty you SHOULD make an exception. I believe I purchased the set from Han Cinema. This is one of those stories you just don't want to see come to an end. I recognize several actors from previous historical dramas. Amazing historical facts in the late 1800s ... loved the American references ... the American female doctor is just the best. I could go on and on and you would become bored.

clara fahrenkrog Jun 17 2010 10:15 pm I would like to find a store where i can buy this wonderful story about the history of the korean people. please if any one knows were i can find it i will appreciated it thanks

Denise Enright May 31 2010 11:45 pm Me too-- I am also hooked on this drama, As I was with Cruel Temptation/ Lure of WIfe I would like to know where to purchase the DVD set.

Jan Petty Apr 29 2010 8:32 pm I love this show and would love to buy a copy of the entire series. I am not one who buys movies or DVDs but in this case, I make an exception. I am hooked.