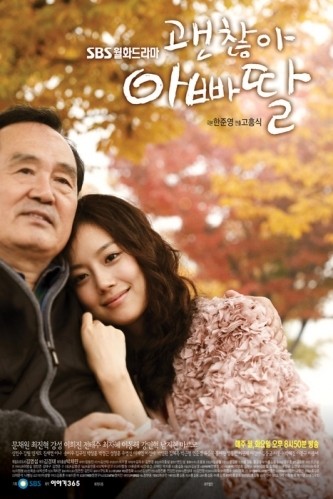 Eun Chae-Ryung (Moon Chae-Won) is the youngest daughter in her family and relies on her father Eun Ki-Hwan (Lee Jung-Kil) completely . Through an accident by the father their family collapses and Eun Chae-Ryung must get through difficult times to finally become a grownup.

Park Jong-Suk ( Jeon Tae-Soo) is Chae-Ryung's senior and his father is the head of a prestigious law firm. Jong-Suk is interested in Chae-Ryung, because Chae-Ryung shows no interest in him, even with his wealthy background. Jong-Suk then concocts a plan and pays Choi Duk-Ki (Shin Min-Soo ) to take part. Duk-Ki attempts to kidnap Chae-Ryung, but is foiled by her father Eun Ki-Hwa. During the planned kidnap, a struggle takes place and Jong-Suk learns that his plan was botched. An argument later ensues between Jong-Suk & Duk-Ki, with Jong-Suk unintentionally killing Duk-Ki. Due to unfortunate circumstances Eun Ki-Hwan, the dad, becomes the prime suspect and is charged with involuntary manslaughter. Meanwhile, Jong-Suk confesses what happened to his parents. His parents covers up Jong-Suk's crime.

Under all this pressure, the dad, Eun Ki-Hwan, collapses with a cerebral hemorrhage. Eun Ki-Hwan is now unable to take care of himself and his family collapses. His wife Heo Sook-Hee (Kim Hye-Ok) is unable to handle the situation.

Eun Ae-Ryung the eldest daughter gets married to Jung Jin-Goo (Kang Sung), the son of a hospital owner, with a promise that her new parents-in-law will give treatment to her father. But after her marriage, her in-laws do not keep their promise. Jin-Goo seems only interested in playing around with other woman and not working ...

jinjoo Apr 05 2017 11:35 am i hvnt seen this drama but now that i found out choi jin hyuk is one of the casts, i'll watch it (right now am watching him in Tunnel drama & Emergency Couple which i really like and also he was in Pride & Prejudice). Awesome actor but i think he's under-rated.

Melisa Aug 18 2016 11:18 pm I watched this drama 2x but I didn't see the wedding of Eun Chae Ryung and choi Hyuk ki because in the picture in the other website there is wedding that happen in that drama. Where is it? Haaaaaaaay! But still I love this drama!

Lee Jun 18 2015 9:20 am In first episode, the father seemed to me to be too much of a pushover -- e.g. he gives $10,000 to his son's girlfriend's father for no fathomable reason. i think this was intended to show what a generous and kind man he was, but to me, he seemed like a naive and foolish man and this was a big turnoff for me.

anyways, it gets better after episode 1 and turned out to be fairly enjoyable.

as an additional criticism, it was a bit of a stretch that the mother would go ahead with *any* get rich quick plan devised by her brother. given that her brother had caused them severe financial issues some years earlier (loss of $700K due to a fake handbag endeavor), i think she would have been extremely skeptical of any of his schemes. so this seemed to defy common sense.

but all in all, fairly enjoyable and interesting throughout.

Chae-ryeong (Moon Chae-won) a delinquent college student studying abroad begs her father Gi-hwan (Park In-hwan) to buy her a new bag and a cell phone as soon as she returns home on vacation. Gi-hwan’s wife Sook-hee (Kim Hye-ok) disregards her husband and focuses only on having her eldest daughter Ae-ryeong (Lee Hee-jin) marry someone rich. Their son Ho-ryeong (Gang-won) has a girlfriend whose parents are obsessed with getting as much financial assistance from Gi-hwan’s family as they can. And as if that is not enough, at his workplace, Gi-hwan even tends to the mess made by the younger sibling of Gi-hwan’s subordinate who threatens to leak his company’s designs. Indeed, in its first episode the drama went to great lengths to show what a devoted and self-sacrificial father Gi-hwan is and how much others count on him. This will serve as the basis to showing how the characters change in the future once Gi-hwan becomes helpless and is the formula to addictive family dramas.

But a typical and easy-to-relate-to story line does not necessarily guarantee it sympathy and understanding from its viewers. Chae-ryeong, the heroine that Moon will play, seems to be a mix of the two main characters from 2009 SBS drama “Brilliant Legacy”: the bright, innocent girl Goh Eun-seong (Han Hyo-joo) and the arrogant rich boy Sun-woo Hwan (Lee Seung-ki). Other characters in the drama were portrayed as overly materialistic or brazen, as if to increase the burden for Gi-hwan. Jong-seok’s (Jun Tae-su) weird obsession over Chae-ryeong which then led to an almost-abduction of her did not make much sense except that it was aimed at getting Gi-hwan get involved in the messy situation. Overall, the start to “I’m Okay! Daddy” leaves a lot to be desired for compared to its predecessors “Coffee House” which had a unique story line and “Dr. Champ” that developed its story convincingly. But then again, the real story is yet to begin as this drama is really about how “daddy’s little girl” Chae-ryeong matures along with her friends and they have yet to show on screen so we will just have to be a little more patient.

lola Jul 28 2013 3:25 pm this drama is one of my absolute favorites!!! its really cute and makes you remember the role of your family more! i cried mostly because my dad is pretty much like the dad in this drama so i kept imaging my dad being in his difficult situations. i think its a great blessing to have a really caring dad because it can have lots of effects on you as well... this drama made me think a lot more about my dad and what he does for us, even being an adult i feel like he still take a big part of my life and i know for a fact that i cant go on without him <3... i loved the actors as a whole they really made the drama extra special, i know this is absolutely not a romance drama which made me happy to see some family oriented dramas that have some reality to them...we all know romance is korean dramas is a little bit too exaggerated lol so a change was nice =D

MissTamTam Aug 22 2011 4:30 am @non sibi: It's so much more than that! - It shows many different kinds of parent-daughter and parent-son relationships which makes it completely different from most dramas which depict only one or two families in detail... this drama shows not only the relationships between the main father, his two "daddy's girl"s and his son, his wife and brother-in-law, but also all the relationships between the family members of THREE other families. And at that, still remains completely logically connected. In total, there are five completeley different kinds of fathers and five father-daughter relationships depicted. - In my opinion, this drama focuses not only on chae-ryung but also her older (and WAY more independent) sister, ae-ryung, who also goes through alot of changes because of her father's accident, and how even if you turn ointo an independent woman, your relationship with your father will always remain important in your life =)

non sibi May 05 2011 6:33 pm I can tell, this is a glamor drama, a guy from wealthy family tries to buy love with money. It is a smart action to put cool faces as actors and actresses to entertain watchers' eyes.