Into the Sunlight - Korean Drama 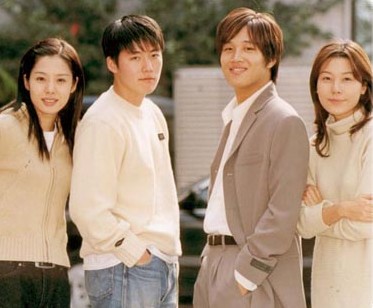 In-Ha (Cha Tae-Hyun) and Soo-Bin (Kim Ha-Neul) ride on an airplane meet for the first time. Myung-Ha (Jang Hyuk) is a guy that can be labelled as the rebel. His mother works as an singer at a cabaret. Yun-Hee (Kim Hyun-Joo) is an orphan, but she never misses getting the top academic score. By chance, these four people meet.

Yun-Hee goes to her classmate Jae-Sook's (Seo Yu-Jeong) house to study, but Jae-Sook's mother looks down upon her because she is an orphan. In-Ha, who is Jae-Sook's step-brother, takes Yun-Hee to her house. In-Ha gets in trouble because of the bag Yun-Hee left behind in his car. Myung-Ha works at a factory. He drives a motorcycle. Meanwhile, In-Ha begins to be bothered, since he saw Yun-Hee's family picture in her bag.

Char Hunter Jan 04 2017 12:05 am Three cheers for a classic that plays just as well today as it did when it first aired. Superb acting from the four leads and a dynamite script that layered each charater with such varied motivations and masterful emotional nuances. You don't have to know their world for it to feel real...the gangster/bar & lounge background is second to the yearnings of youth, the failures of wounded parents and the harsh barriers of class and power that can crush the first blush of love. Great job.

Madeleine Apr 04 2014 11:34 am One of the only korean dramas I have watched a second time. Great cast, rebillious youth, savage Choeble parents, motocycles, cigarette smoking, gang fights, all great stuff. And the love connections really work and make sense. Solid ending. Good chemistry all around.