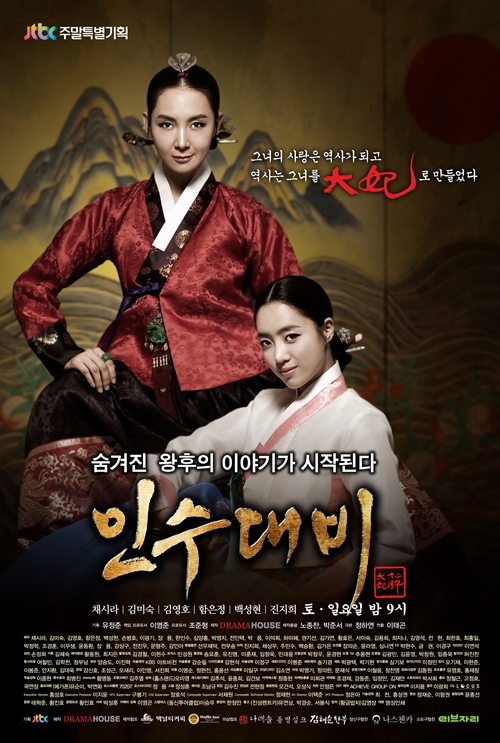 Drama series depicts the ill fated relationships of three women and their destinies - Queen Insu dreams of becoming the most powerful person in Joseon, Queen Yoon who suffers misfortune and Queen Junghee.

It has been a year since King Moonjong became the King of Joseon. King Moonjong has become sick and worries about his young son, Crown Prince Danjong. Meanwhile, the king's younger brother Prince Sooyang has his eyes on the king's throne.

A party is held in the palace. Han Jung and her sister go to attend the party. Han Jung is the youngest daughter of noble man Han Hwak. Han Hwak is also a high ranking public officer and also a position appointed by the Ming Dynasty. Han Jung, meanwhile, isn't like the other women from noble families who are calm and obedient. Even with her young age, Han Jung is set on becoming a queen. Walking in the palace, Han Jung tells herself that she will become the queen. Han Jung loses her sister while walking around the palace. While roaming the halls she meets a young man. Han Jung identifies herself, but the man doesn't say who he is. The young man says he will take her to room where the party is held.

When they arrive, they see Prince Sooyang dancing in front of King Moonjung and other public officers. Han Jung gets a good impression of Prince Sooyang. Han Jung tells the young man that Prince Sooyang is the only one fit to become king among the five princes. The young man warns her not to talk like that. If somebody hears that she can find herself in big trouble. Nevertheless, Han Jung says that she will become sick if she can't speak her mind. The young man smiles. Then they go to the area where the women from the royal family has refreshments. Han Jung asks the man again who he is and the young man replies that they will meet again if it's meant to be. Then he walks away.

King Moonjong leaves the party early due to sickness. He thinks of Prince Yannyeong, King Sejong's older brother, who told King Sejong to appoint Prince Sooyang as the king rather than sick Moonjong.

Han Jung sits in a tree, telling herself that she will not become a concubine for the King of Ming Dynasty. Han Jung's two aunts became concubines for different kings of the Ming Dynasty and when the kings died her two aunts were buried alive with the kings. Han Jung then threatens her father that if she is forced down she will either jump off the tree or hang herself. Han Jung also tells her father that she has decided to become the daughter-in-law of Prince Sooyang, after seeing him at the palace. Han Jung's father states that Prince Sooyang has two sons and that the oldest son, Prince Dowon, is of age to marry. Han Jung's father promises to her that she will become the daughter-in-law of Prince Sooyang.

When Court Lady Kim passes by Song-Yi's house, Court Lady Kim hears of her desperate situation from the neighbors. Court Lady Kim feels sorry for Song-Yi. She then walks into the kitchen and finds Song-Yi making porridge for her deceased father. Court Lady Kim goes to talk to Song-Yi's mother. She offers to take Song-Yi into the palace and support Song-Yi's family. With the help of Court Lady Kim they can bury their dead father. In front of her father's tomb, Song-Yi promises that she will become a king's concubine and replace the current tombstone with a large tombstone.

Now, Han Jung insists to her father that she needs to see Prince Dowon before they get married. Prince Dowon comes to their house. He walks into the garden where Han Jung is waiting for him. Prince Dowon asks if Han Jung requested to see him. Then, Han Jung turns around to see him and is surprised to see the young man she met at the palace.

kellie Nov 30 2022 10:01 am This is the messed-up family (and pain-in-the-neck daughter) that produced the worst king in Korean history. I wonder what the ratings were for this -- it's hard to watch.

Saeguk Fan Feb 16 2022 1:34 am Really good saeguk drama imo. I've always been interested in Korean history and this drama got me hooked with the story of Queen Insoo. Really superb acting from all the actress/actors. Gotta disagree with the other commenter, I especially love the actress who played as the younger counterparts of queen Insoo and the actor who played as prince Dowon. Their acting is really good especially their crying scenes and their chemistry with each other was really sweet. I personally wish I could have seen more of their scenes.

Feen for saguek Jul 25 2021 9:08 pm Sorry I have to say this but as a sucker for queen yun (i have my reasons) I aint appreciate how they made her out to be a whole cougar, although it did add to the insanity and obsession of her personality it be very inaccurate as she was only 2 years older than seongjeong Maybe I have a bad eye for acting or my soft spot of eunjung but I Loved her character in this. Idk, the bratty, rebellious but being one of the smartest characters even among learned scholars made her very intriguing and I believed she played such a great role. Her and prince dowon were such a great young couple in my eyes and even though his death period was historically correct, I would’ve loved to see more of him.

Chae Shi-ra first appearing in the show delivered more depth to the character than Eunjung did in the entirety of her time playing the character.

Kimberley Sep 19 2016 6:45 pm I don't like the history , I hate Jung, she is too greedy, everything they did to get to the throne was bad, really cried when they killed the little boy (young king) and when prince dolwan died.

jennifer Dec 08 2012 3:07 pm hahaha eunjung is still funny and ohhhh so cute i love you more eunjung no one can beat you ur the only one!!