In Love And The War 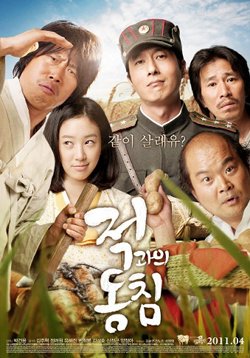 Set during the Korean war, North Korean soldier Kim Jung-Woong (Kim Ju-Hyuk) aims to liberate the people, but when he meets South Korean Sul-Hee (Jung Ryeo-Won) in a village, he slowly starts to change ...

In 1950, residents in a rural village hears rumors of a war. Even though the country of South Korea is in a war, Seokjeongri is a remote rural village seemingly oblivious to what is occurring in other parts of the country. One day, while the villagers are busily preparing for the wedding of the village leader's granddaughter Sul-Hee, a high level North Korean officer Kim Jung-Woong and his troops appear in front of the villagers. The soldiers appear to be ready to takeover the village, but the residents seem elated that the soldiers have arrived. Jae-Chun welcomes the soldiers passionately and Mr. Baek helps the soldiers. The kind village leader and the warmhearted villagers disarm the soldiers. But, all of these actions taken by the villages are part of a calculated and shred strategy to preserve their own safety.

In Sukjungri, the enemies and residents start to mix together, but the war is going in North Korea's favor and higher level authorities in North Korea orders a secret mission ....

c_u_t_e 13 Oct 02 2012 3:29 pm it s a sad ending especially for those who were innocent and to those people who just want to continue living their simple lives...seeing this movie has made me suddenly realized that life no matter how simple you want it to be when fate wants to twist it everything will change...

iLLusiOnEr Dec 30 2011 12:37 pm Very good movie.Jung Ryeo Won is lovely as always.The scene when the bombs dropped was done like the scene of 'pig-catching' in Welcome to Dongmakgol, make me believe that it is from the same production, but it isn't so. 8.5/10

fahlevi Jun 12 2011 1:47 am Jung Ryeo-Won, i love you. you have the expresive talent, we look that on ur expresive face and you so felt the movie. love that.