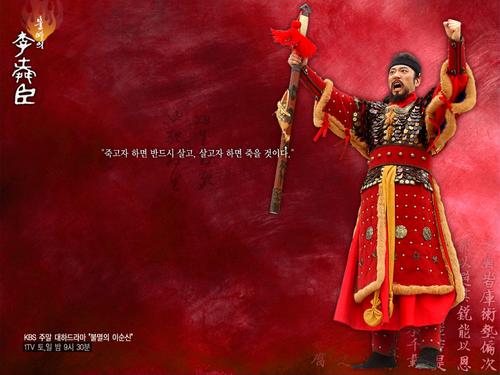 Admiral Yi Sun-shin, who led the Joseon Navy to a myth of invincibility during the Hideyoshi invasion, was a true soldier and leader who struggled to protect people. Drama Yi Sun-shin is not a biography of Admiral Yi Sun-shin, nor does it inetnd to reconstruct a part of the Joseon Dynasty that existed in the 16th century. This drama will merely look into many human beings, incliuding Yi Sun-shin, who underwent an extreme situation. It is not just a historical drama series. It’s rather about human nature that makes both of the war and peace. It is a Korean version of “War and Peace” in 21st century. No hero has ever been sent by heaven. He has emerged as one ultimately after undergoing a lifelong process. Drama Yi Sun-shin is designed to shed a new light upon him as a human being.

Lisha Apr 03 2020 5:57 pm I found this when it was half finished airing. I did not get to see the beginning. It was sush an amazing show, I would love to see it , being shown again. With some pre announcement. I love what I was able to see.

malcolm Jun 23 2017 11:33 am How could you not see a drama about the greatest admiral of all time ...I`am not saying that(though its true) nearly every naval expert agrees on this

Lisa May 04 2016 4:23 pm What an inspiring drama! Admiral Yi was out-numbered in every battle he fought. A tiny underdog seemingly no chance. But what a massive fire burning inside the dog! The story is so ugly but so beautiful and moving. Yi Sun-Shin is a gentle soul always serving to others. He was fierce in the battled and uncompromising to political correctness.

The drama is highly emotionally charged. I noticed the actors executing those heavy emotions vigorously. They must have been emotionally exhausted while filming, especially the leading actor: Kim Myung-Min. Thank you!

Next time when I will be in Korea, I will travel along Korea's southern coastline where the Turtle-ships came alive breathing out smoke and bombs - where Admiral Yi Sun-Shin successfully carried out the mission impossible to protect the people of Joseon.  :)

Jonjon Nov 01 2011 10:50 am A very spectacular historical drama. Admiral Yi Sun Shin is both a good navy commander (like Nelson) and a reformer of those social constraints that plagued Joseon in his time.

Steve Conger Sep 18 2011 7:36 am I am a multi-multi generational American of Western European descent, so I have no bias in favor of any Asian culture. But for me, and I have been watching television since it was first commercialized, this is my all-time favorite show of any genre. I am watching it for the 2nd time on PBS and I own every part that I have been able to find commercially available. Wonderful characters and great, powerful human drama. Good music on the soundtrack. I already look forward to watching it again.