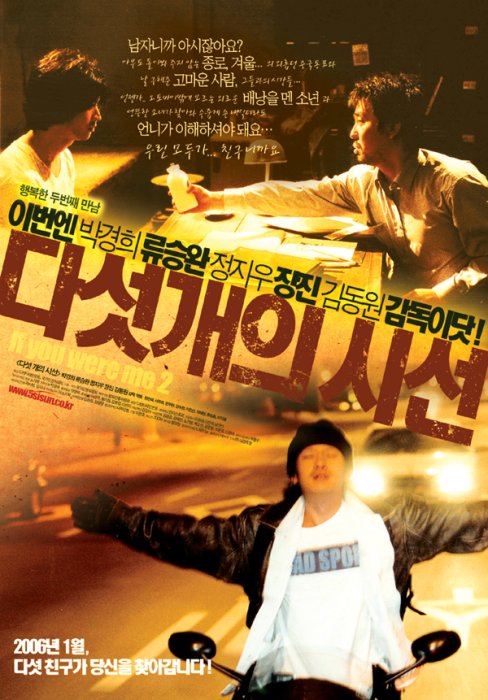 Seaside Flower dir_[Park Kyung-Hee (director)|Park Kyung-Hee]] Eun-hye suffering from Down’s syndrome entered school earlier than others did. Friends from school make fun of her because of her slow speech. She’s always dignified and doesn’t care about what they’re saying, though. She’s pretty good at playing a flute, sending a text message by cell-phone, watching movie on the computer and telling an old story.

Hey, Man~ dir_Ryoo Seung-Wan Woo-sik thinks ‘man’ should be ‘manly’ in every ways. What he’s talking about, with his friends at a bar just tells us how often and seriously we discriminate against others out there; sexual discrimination, racial discrimination, treating waitresses so bad, homophobia, judging people by the way they look and education back ground, etc. In the end, all of his friends left him behind and he came over to a stranger saying “you know what I mean, ‘cause you a ‘man’!”

A boy with the Knapsack dir_Jung Ji-Woo 19-year-old Hyun-iee and Jin-sun got to take refuge from North Korea. Jin-sun is always troubled with her classmates and an owner of her part-time work place cheated her. She’s all alone at home. Her silence is made out of lack of communication with the world, which makes people think she’s deaf. Hyun-iee misses his hometown so much and buys a lot of gifts for his parents and stuff them in his knapsack just like his routine.

Someone Grateful dir_Jang Jin There are two guys are sitting face to face in a basement; Kyung-sin who was caught from intervention in student movement, and a police officer, Joo-joong who’s in charge of torture. The student doesn’t confess what he did and who else involved in the movement and the officer keeps on torturing him. By the way, the police officer spoke out how he’s been working as an informal worker at a police office, which he must work over time without any special bonus and any insurance from work. He’s consoled by the one who he’d arrested.

Jongno, Winter dir_Kim Dong-Won It’s very early morning on December 9, 2003. A Chinese Korean, KIM Won-seob is found out frozen to death on the street of Seoul. One year later, a director’s searching for the deed of him somewhere around the area where he died. When it was very late and freezing night, KIM Won-seob got lost on the way to a strike site that was to stop a deportation order and to amend Korean Residents Code. He’d been looking for some help from starving and cold all night, but nobody found him.