If My Wife Becomes An Elementary School Student 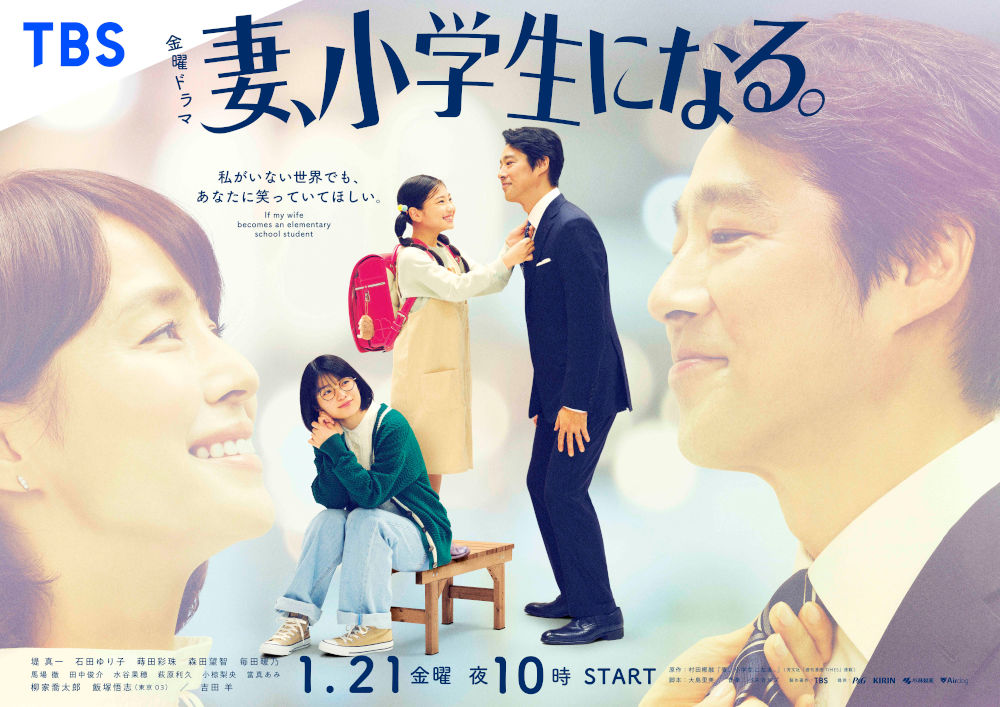 Keisuke’s (Shinichi Tsutsumi) wife Takae died 10 years ago. He has still has not gotten over her death. After her death, Keisuke just spends his days aimlessly. He has a daughter Mai. Keisuke wishes Mai to be happy, but he doesn't do anything for her except provide basic support. He is unattached to her emotionally and hardly talks with her. It seems their father and daughter relationship stopped 10 years ago when Takae died.

One day, a strange elemental school girl appears in front of Keisuke and Mai. The girl introduces herself as Takae.

Lancelot Jul 05 2022 1:22 am One of the best drama i've ever watched. It's really a heartwarming story, a delightful characters, beautiful soundtrack, top notch script writing and brilliant directing. It didn't won best drama in Drama Academy Award is beyond reason.

hinamatsuri Jul 03 2022 7:15 am Losing a family member by a tragic accident is very sad indeed, Moreover they come back to leave their family again. The saddest episode in my opinion is when Yuri accepts that Marika is her sister, she really can't live without her sister. Kamiki acts in this scene is very powerful.

Srinivas Jun 30 2022 8:40 am The episodes are too few. It's really addictive to watch, so all the episodes have been watched overnight. After all the episodes ended, I feel like something was missing in my life. That's how good the drama is. 10/10 would rewatch.

Flowerist Jun 29 2022 8:01 pm its been a long time since a drama made me cry. Brilliant directing, on point script writing, combined with excellent acting of the actors, it becomes a very Great drama.

Xie Minhua Jun 28 2022 7:21 am Every episode makes me curious, so I can't stop watching it. And this little girl's' acting is absolutely epic. only Japanese people can make a premise like that into a good story. I believe that if it is adapted by other countries, the results would be weird.

Jim Gordon Jun 24 2022 4:20 am At first glance, reading the synopsis, I think it's like the premise of ordinary Japanese dramas. As soon as I saw the scriptwriter, it turned out that Satomi Oshima (1 liter of Tears & Nagi no Oitoma), I immediately wanted to watch it. It turned out to be addicting, Finished the 10 episodes in just 1 night. IMO Drama of the Season, probably Drama of the Year so far. Nono Maida's acting as a 40 year old mother is really top tier, maybe God Tier, her natural expression can be very different when she act as a 10 year old kid or as a 40 year old woman. The best child acting since Mana Ashida in Mother in my opinion. The BGM is similar to Nagi no Oitoma, because the composer is PASCALS, it matches the drama's theme, the nostalgic themes. Then the ending song Yuga - Sea of Light is the most solid, the timing of the song really fits the scene, it gives goosebumps.

Jorge Mendes Jun 21 2022 10:35 am Japan is really good in making a slice of life drama. And this one is one of the best for me. The story is just flow naturally every episode, no boring moment, and the cast act as natural as possible Really a great drama.

Hilton Ayesh Jun 19 2022 9:09 pm I've Fall in love with Nono Maida. Her acting is so natural as a woman in her 40~50s. What an amazing performance by a 10 year old actress. Hope she'll become one of the most successful actress in japan and world.

Luwingker Pena Jun 18 2022 8:48 pm First of all, I started to watch because i thought it would be a funny and silly drama, never expected it would be a sad and tear jerk drama. Oh and the ending OST is what you said a very touching song. Highly recommended drama. Best of the season. 10/10.

Jin Bo Yong Jun 18 2022 9:12 am I laughed, I cried, I experienced something that changed my life. Beautiful and sad drama about about the story of a family who is left behind by a family member, and can't continue living normally.

Whomping Willow Jun 17 2022 9:23 am I haven't been interested in binge watching Japanese dramas for a long time. But this time is different, episodes 1 to 10 I finished overnight. What a beautiful and heartwarming drama, with a powerful cast, great song, and brilliantly executed script. 10/10 for me.

Klipsch Jun 16 2022 9:42 pm Just finished, and wow, beyond my expectation. Near perfect drama. That little girl really is a star in the making and Yuriko Ishida is still a beauty even in her 50s.

Bloemfountain Jun 16 2022 5:30 am Beautiful drama. Really heartwarming, can't believe she's only 10. What a performance. BTW anyone know the insert song played in every episode? Beautiful song

Ymir Pyotr Jun 15 2022 7:33 am Beautiful and heartwarming human family drama. The lost of beloved family member, and the long mourning period is just a perfect premise for the story. Please admin, update the page, we need more details about this drama.

Jacklyn Jun 14 2022 10:08 am Nana Maida is just great in this. Should be best Drama in Drama Academy Award, and Nana Maida should get a special award for her performance.

Near Hill Jun 14 2022 10:06 am Great Family Drama, with brilliant acting from the cast. Especially Nono Maida, her performance's just breathtaking. Need more her to featured in a dramas as a main cast.

She remind me of Mana Ashida in Mother.

They stole the show.

sayoko Mar 29 2022 5:30 am finished watching this,its perfect! Got me ugly crying every episode?its very sad for their parting but so happy everyone's find their happiness in the end. 10/10 for me! Extra point for marika-chan,she's very good in her acting!

Chachi Feb 08 2022 12:45 pm Im not a person than actually watching a Japanese Drama but when I suddenly watch the highlights of this drama I amazed and curious about it. Then I watch it right after that. Super duper good story and the cast also. 10/10 ⭐⭐⭐⭐⭐⭐⭐?