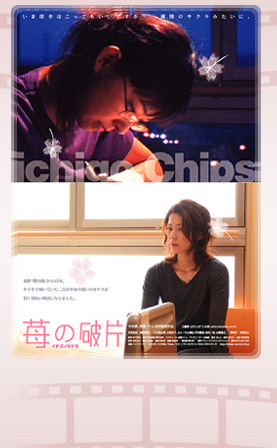 Ichigo no kakera deals with a female manga artist Ichigo Nekoda (Miyazawa), whose career is heading into a downward spiral as she can't reinvent the success of her 12 year old hit the Cherry Road. Now in her early 30's she's become quite fond of alcohol and egoism to some annoyance of her loyal manager Tomoko (Kajiwara), who isn't willing to leave her side even though the financial strains of her client are also becoming her personal burdens.

Ichigo still gets greeted by her female fans and willingly signs autographs, but getting praised for work that she's done over a decade ago doesn't digest as smoothly as one would assume. Her on and off man, who happens to also be her editor steers toward the off days more than usual as he also grows tired of Ichigo's uninspired ways. But when the going gets tough, Ichigo heads down to a transvestite bar where she's more than welcomed with words of wisdom and a few hard drinks.