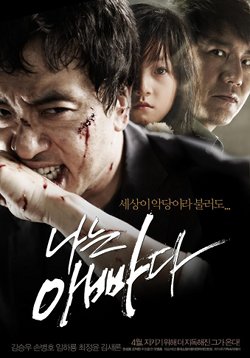 Han Jong-Sik (Kim Seung-Woo) is a corrupt cop. He also has a sick daughter named Min-Ji (Kim Sae-Ron) . For Min-Ji, Jong-Sik frames innocent people and does favors for the mob. One day, organ transplant coordinator Soo-Kyung (Choi Jung-Yoon) locates a heart for Min-Ji. But the guardian for the heart is magician Na Sang-Man (Son Byung-Ho). Na Sang-Man was falsely accused of a crime by Jong-Sik and sent to prison.

Jong-Sik knows by his own intuition that Sang-Man will not let the organ transplant occur. Because of this, Jong-Sik is about to hand Sang-Man over to the mob. Sang-Man is aware of Jong-Sik plans and kidnaps Min-Ji ...

chona Sep 03 2013 11:11 pm i just finished watching this drama & it was full of action, moving moments and Kim seong woo's another great performance! it's quite sad story but worth-watching! he thought he was the worst dad but in my opinion, he's got his good side in that he sacrificed it fully for his daughter! a must watch movie!