I Wish I Had a Wife 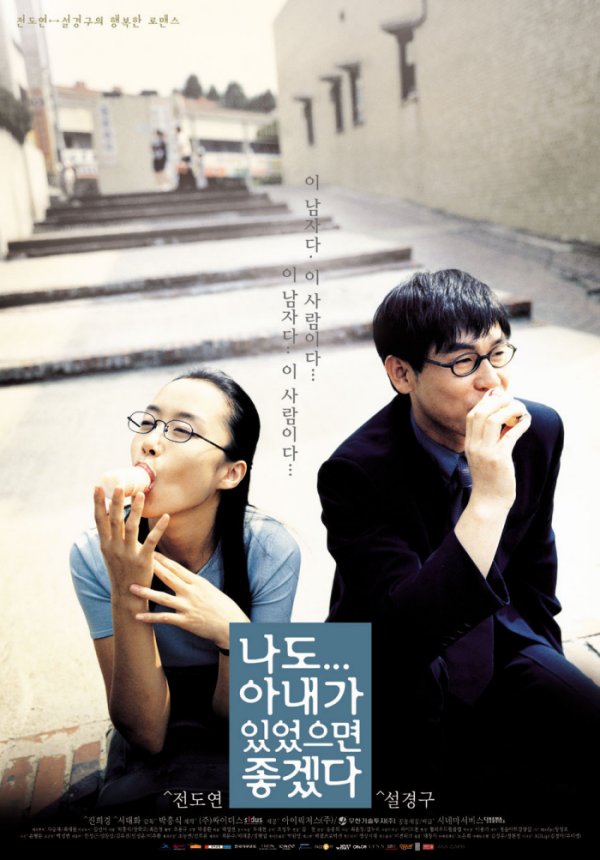 Bong-soo (Sol Kyung-Gu) has been working as manager of a small bank in an apartment complex for three years. During his three years there, 23 years if you count his school days, Bong-soo has never been late. However, he purposely decides to skip work one day. There is only one reason. Inside a subway train that has suddenly stopped on his way to work, everyone around him reaches for their cell phones to call someone. At that moment, he realized that he does not have a single person to call. He does not know that inside the educational center across the street from the bank where he works, a 27-year-old woman Won-ju (Jeon Do-Yeon) is looking over to him, nourishing a small love. Bong-soo and Won-ju run into each other every day, at the Ramen restaurant, at the bank, at the bus station.

ll kinds of trivial incidents occur but Bong-soo still does not truly recognize Won-ju's presence. One day, while looking over the bank's CCTV tapes, Bong-soo discovers someone pitifully calling out his name to the small, closed-circuit camera that does not even record sound.

Fred Cordiano Dec 15 2018 2:35 pm I really adored this movie. They are both people in search for love, hope and future. As usual Miss Jeon has transformed herself into her character with ease. She is adorable