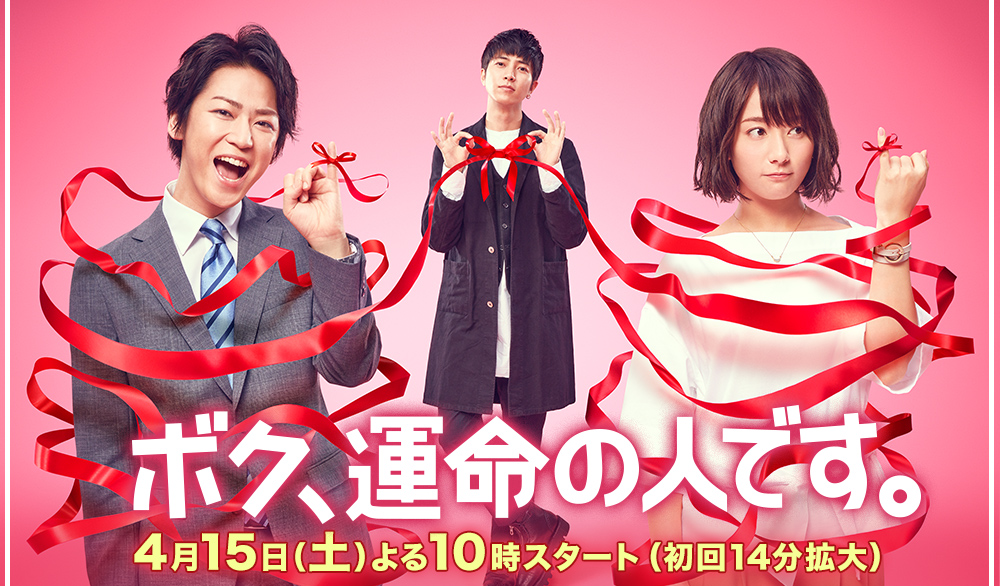 Makoto Masaki (Kazuya Kamenashi) and Haruko Kogetsu (Fumino Kimura) are both 29 years old and single. Since they were children, they have passed each other at various places like on the beach and shrines. Yet, the two are not aware of each other at all. One day, a man appears in front of Makoto Masaki and introduces himself as God. He tells Makoto Masaki about his destined soul mate and that she works next door. When he faces Haruko Kogetsu, he tells her "I'm your destiny."

Lalala Jun 04 2020 12:10 pm Recommended another j drama again!! It makes you feel sad and happy at the same time. Thanks your destiny after you finished watching it.

Bob Cheong Kai Meng Feb 16 2020 12:46 am Seems Ichiro and Mit chan has some special bond...maybe he receives more paternal love and guidance from uncle instead of father in future

NINA Apr 23 2019 6:48 am I've seen a few comments about Ichiro giving an impression that his childhood wasn't as good as we would've hoped, but come to think of it maybe he was partly there so the future him wouldn't experience it. You can actually think of a few scenarios, that's a pro of an open ending story. ?

kyui Jul 10 2018 10:11 pm it ended with 10 episodes, i'm sad they don't have enough screentime together after they realized that they are destined together huhuhu , why is it most dorama has a short episodes :| i'm crying..... but i really love this drama, haruko is so beautiful

shinya Mar 10 2018 12:19 pm If only they add extra 10 minutes to give proper ending to Yamapi's character, the show could end perfectly without any dissatisfaction from viewers. It didn't completely fall flat but it is surely not a satisfying way to end the show. It just doesn't feel enough.

iLy Dec 14 2017 7:37 am it's a good drama, really. I don't watch dorama a lot, but after seeing this, I think I want to try seeing many dorama from now on. I know there's no way every story will end up happy ending, but I hope this one will do. but unfortunately, this one keep make me thinking it will be sad ending... 30 years later.

from the way Kami a.k.a Ichiro say good bye to Mi-chan (I like the way Ichiro tell his name LoL), I think Makoto will have a hard time from now on. maybe because he will lose Haruko? risking her life to born Ichiro, maybe? but if it's true, then is that will make Makoto hates Ichiro? because if Makoto remembered, then... owh, my mind can't keep it up.

I ddon't understand why he just asking Makoto, but not to Haruko. if he feels guilty about her, then that's make sense.

good to see Yamapi again after from 5 to 9, and for Kame, I just watched him on Policeman and me. I like his eyes, the way he stare, haha...

I looked forward to seeing much of Pi in this, unfortunately, he has limited appearances. Every episode, I'll just wait for Kame to go home so I'll see Pi's handsome face. That 7/10 is purely from Pi's performance with wearing the frilly apron and the bromance with Kame.

As for Fumino, well, she's pretty.

Revel Jul 24 2017 3:42 am For those who are worried about the ending , dont be. I think they planned to do a movie special , where a lot of the unsettled stuff will be focused on. jseries tend to have a movie sequel and im sure this series is aiming for that too . So overall , its a very intertaining , and a cute series from the beginning until the end . 9.5/10 would recommend you watching it.

au Jul 22 2017 1:41 pm overall good, but the ending is really disappointing. I'm not really into Jdrama so i don't watch a lot of it, but do Jdramas really need to end in 10 eps? I'm still curious about sekihara and the tetra pod girl and i wished that on the last eps would show short story of baby ichiro, little ichiro, teen ichiro and adult ichiro even only for a few seconds. and also the moment when ichiro said he never played kicking the can made me think that he somehow has terrible childhood. made me think somethinh bad happen to makoto and haruko when he was a kid.

tsuyoi_hikari Jun 27 2017 8:24 am 8.5/10 - It is a fun drama and a hilarious one too. I really enjoyed the drama and watching it was a highlight of my week. I thought the script is excellent and tight and it was pretty cool how the writer made the destiny things connected to each other, all the ridiculous tasks Makoto has to do each week to win Haruko, how music connected with everything that happened to them & etc..

Of course, the best part each week will be all the scenes of Makoto and Kami-sama since their chemistry is really out of this world. I never thought it was possible for them to top their Nobuta wo Produce chemistry but they certainly did it in this drama. Not to mention that YamaP is on roll as Kami-sama as his face expressions here are A+++.

movuzzo Jun 26 2017 11:27 am it went downhill since episode 8 for me. If you like light hearted drama with less conflict, then this is ok for you. However the ending wasn't quite surprising, just a lil bit boring.

El Jefe Jun 24 2017 7:47 am im a bit disappointed with the ending, but i guess that's more of my problem, i dont really like it when dramas just tie the loose ends at the final episode. also in the final episode, i feel as though there wasn't as much "danger", even after all the problem that arose, i feel as though there was no threat to their relationship, and i didn't care as much

jubiemon Jun 19 2017 7:28 pm I have such mixed feelings about this drama. Overall I did enjoy the drama, but I feel like the ending fell flat! I loved the concept of fate and choice. The symbolism in this drama worked well, except for the end. I enjoyed the bromance between Yamapi and Kame very much! However, the last episode was just a huge let down. I won't spoil it here for people who are interested in this drama, but feel free to look at our blog if you're curious about some spoilers.

Kamemin223 Jun 18 2017 8:24 am First of all, getting Kame and Yamapi in the same drama after 12 years is like a dream. I've loved Kame since forever and never notice Yamapi that much. My focus is always on Kame. But before Boku Unmei no Hito Desu, these two were always hanging around although they said they've been friends since junior days. Them being together bring out their playful personalities. It's a kind of bromance that i really respect. I learned to love yamapi because he makes Kame happy. Boku Unmei is a love-comedy drama but every time Makoto got rejected by Haruko, my heart bleeds. And at Episode 9, Kame pulling Haruko's futton made me LOL. I didn't expect a sad twist before the episode ends. I swear i cry a river every time i watch the bathtub scene. Seeing Kame and Yamapi apart even in a drama feels like a goodbye forever. I hope they could get a show together again in the future. I recommend this drama because you will love all the characters as there were no villains. It is something that will make you laugh and cry at the same time. I haven't watched the ending episode because watching it means goodbye forever. And i don't want it to end.

Huh Jun 10 2017 3:42 am So far so good but why does it feels like masaki is going to die here soon. Lol. Maybe it was just my imagination. And fumino kimura is so cute here. Looking forward to watch episode 7 and 8.

fanImYourDestiny May 29 2017 12:28 pm I'm really like this movie. Can somebody tell me how much episode this movie have, please? Thank you.

Brian May 23 2017 10:51 am I couldn't wait for a drama with Fumino Kimura in a leading role after seeing her shine in A Life: A Love. It's also nice to see Nanao also starring in this drama. Seeing as I don't watch a lot of Japanese dramas, I didn't expect to see many familiar faces....but then I also recognized the guy from Tatta Hitotsu no Koi (Kazuya Kamenashi...with some surgery done right?) and the guy from one of the best drama series overall, Puropozu Daisakusen (Tomohisa Yamashita)! This is bound to be a great series and I'm enjoying it a lot so far!

アラン May 18 2017 1:37 am Just realized Seiichi Tanabe and Eriko Watanabe were a husband and wife in 11-nin mo Iru. Wondering if their roles here are intentional? LOL

Yae Apr 22 2017 12:12 pm This dorama got many famous actors surprisingly. Even Sugimoto Tetta & Ishino Mako were starred in "Totsuzen desu ga Ashita Kekkon shimasu" recently and already worked in here. It's weird to see them as husband-wife because they're unrelated in Totsuzen.

Not that funny but it's a enjoyable drama. Fumino's hair type suits her too rather than her usual straight long hair.

Karen Khoo Mar 03 2017 10:18 am I was so happy to see a new drama from Kame. Awww though I wanted a drama like Kaito Tantei Yamaneko coz Kame was superb in that role.