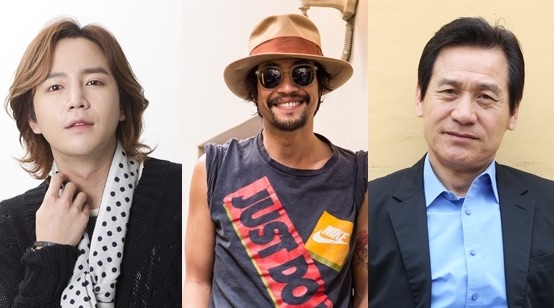 Various people from different backgrounds travel on a warship. There they show their desires that go beyond morals.

graciala Sep 10 2017 9:21 am I wish it will view here in philippines... im really excited for the new project of JKS!! youre the best idol

Kathy A Sep 04 2017 10:00 am Nice to see so many familiar Eels and their comments. Just found out JKS is doing a new movie. So exited. <3 Since quitting FB I've been out of the loop. Thank you Sukkie. Sounds like a departure from your more recent dramas and similar to The Case of Itaewon Homicide. Can't wait to see it. Love everything you've done, be it serious or romantic comedy. Zikzin everyone.

Juanita Cotto Jun 17 2017 10:25 am I'm waiting for that movie with a great spectations. Is a great director and the lead actor is a great masyer. All the team work are amazing. Congratulations to all of them.

Rose Deupree Jun 09 2017 7:01 pm Extremely excited eel patiently waiting for the film to be released and hoping that we can easily view it from the USA!

Christine Romalewski Jun 08 2017 6:12 pm I was initially interested in this film because of the opportunity it gives Jang Keun Suk to show his acting chops and portray a character his fans might not find sympathetic. As I've learned more about the work of director Kim Ki-Duk and the reputations of the other cast members, I've really gotten interested in how the director is going to tell his story in this film. Because Kim Ki-Duk is recognized world-wide as a director who has earned the right to be noticed, I hope the film will be available with English subtitles very soon after it's release.

Mabel Elizabeth Chiappetti Jun 08 2017 5:05 pm I fully support this new project involving Jang Keun Suk, a being who has demonstrated that with effort everything is achieved, there are stumbles but we should never give up. From Argentina we will be waiting for this great production. I greet all those who work in it.

Lee Ashiya May 27 2017 8:57 pm I'm surprised to know they're gonna film the movie for just two weeks. i hope the length on this film was long enough.. i'm excited to see how evil Jks will be in this film?☺ Fighting jagiya!! I'm sure you'll make everyone proud of you. even non eels...

Mamacri May 24 2017 3:46 pm From all snippets I gathered, this must be one of Director Kim Ki Duk's jewels..taken to another high. I hope many can watch this movie with open mind and a broader view Jang Keun Suk will act without restrains, not hindered by taboos, another beautiful chance for him to show his many colors. The cast is great! Looking forward to the collaboration of Director and cast, I'm really anticipating this movie

BabyEel May 23 2017 12:45 am I'm waiting crazily for this. Because of you jang geun suk my one and only? I don't understand why are not comments here yet?