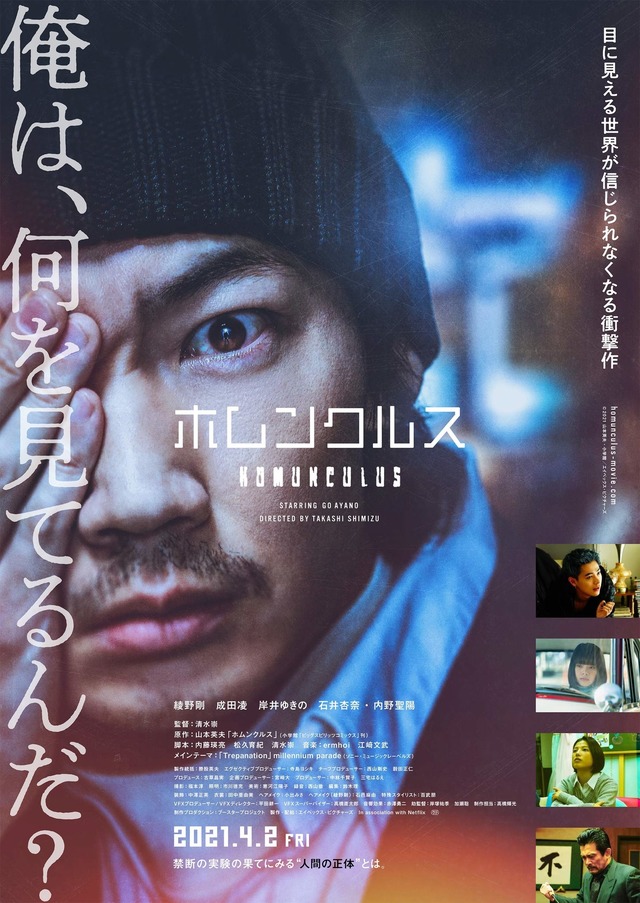 Susumu Nokoshi (Go Ayano) once worked for a top foreign financial company. He is now a 34-year-old homeless man, usually found around a park in Shinjuku. He then meets medical school student Manabu Ito, who is looking for volunteers to undergo a surgical procedure known as trepanation. The surgery involves drilling a hole in the skull. Susumu Nokoshi is not interested in having the surgery, but he agrees to have the procedure for 700,000 yen. After the operation, when Susumu Nokoshi closes his right eye and sees someone with his left eye, he sees people having a distorted appearance. Manabu Ito tells him that the distorted appearance is a form of visualization from deep within the mind. Susumu Nokoshi communicates with people, who possess a dark side in their subconscious mind.

iyukiss Sep 28 2021 11:58 am The Manga is way to better then this movie, because they changed the Characters and the Plot, and they didn’t delve into the story like the Manga. But i kept watching it till the end, only because Ayano & Ryo are my favourite Actors?. To be honest they both acted well in this movie, and i shipped them too hehe ^^ i think if they ended up together, the story will be more Interesting, because we will find out why Ito came only to Nakoshi, and what did he mean with nakoshi had to keep looking at his Homunculus, and that Nakoshi is the the only one who can see his pain.. i mean they can be a great couple. That’s my Opinion, anyways i enjoyed this Movie!.

nini Jul 30 2021 12:14 pm i haven't read the manga, so I am giving review purely on watching the movie. the first was a slow burn but the second half was definitely worth watching. I simply loved "ITO" character, he portrayed his crazy personality really well.

darryl May 07 2021 2:27 pm first half of the movie stayed true to the manga but a bit rushed (i get it theres a heck load of source material and theyre going on a time cut) but when the 2nd part hit it was rly rly confusing for a reader of the manga. they basically made a new plotline. I would give this movie a 3/10 because i read the manga and hated the new plotline but a 5/10 if i was looking at it just from a movie standpoint

Renji May 02 2021 12:18 pm Got bored watching this, paused halfway just to sleep and continued the next day. Story is kinda meh...

Jacqueline Puentes lol Apr 22 2021 3:38 pm I feel as if the movie was lacking emotion, sometimes the acting was wonky and didn’t necessarily feel right. However some parts of the movie stayed true to the manga, the start of the movie felt a little rushed. There is not one scene where Nakoshi licks his semen (which is upsetting for me :() and the ending is quite different from the manga, we don’t have Nakoshi’s background and he is not portrayed as a narcissist like in the manga. I still enjoyed the watch and if you do have some time to spare I’d recommend it if you don’t mind it being different from the manga.